You're only as good as your word 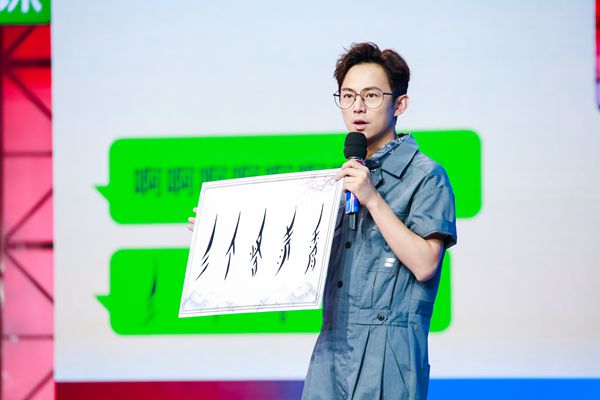 TV personality He Jiong is one of the hosts of the show.[Photo provided to China Daily]

A game that is character-forming, educational and entertaining is wooing audiences by making them feel on top of the word.

It premiered on June 10 and is broadcast from Monday to Thursday at 7:30 pm through August.

The quiz show is actually an offshoot from another variety show, Happy Camp.

The word game which sees players guessing each Chinese character based on its radical, or a key component part hinting at some features of the word, quickly became a favorite on Happy Camp.

"It inspired us to produce an original quiz show dedicated to Chinese characters," says Wang Yizhen, a director who has been working on Happy Camp for 15 years, which features celebrities both from China and abroad and has been aired since 1997 by Hunan Satellite TV.

To ensure the academic integrity of Magic Chinese Characters, as well as a production team from Happy Camp that includes Wang, a team of experts has been invited to join in.

Academics from the Chinese Proficiency Competition for Foreign College Students adjudicate when called upon.

The Chinese proficiency competition, initiated by Confucius Institute Headquarters, aims to help people around the world better understand and appreciate the nuances of the Chinese language and culture. 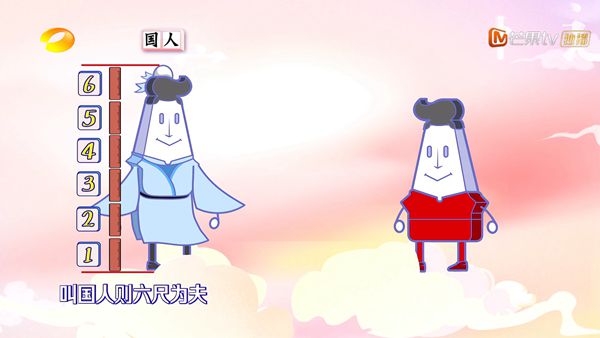 Magic Chinese Characters uses cartoons to explain the Chinese characters and idioms introduced in the show.[Photo provided to China Daily]

He Jiong and Du Haitao are the hosts. The two men had already gained a wide fan base while working on Happy Camp.

Time is of the essence. Contestants, from all ages and professions, have to correctly name the Chinese character in just eight seconds.

"Couriers, astronauts, office workers-we welcome people with different backgrounds to get involved in the show, not just students," says Wang.

Some viewers watch the show hoping to learn. Tian Qian, a 36-year-old Beijing-based mother, is one of them.

She accompanied her 6-year-old son to watch it this summer. She wanted her son to learn more about the language in an entertaining way.

"I had my son studying English when he was 3," says Tian, an English teacher.

"However, when I looked at the Chinese characters and idioms, I realized that I literally lacked sufficient knowledge about the Chinese language."

But there is no doubt that the star attraction of the show, for many viewers, is, well, the stars.

Yu Kang, 28, from Changsha, Hunan province, is such a fan.

"I first watched the Magic Chinese Charactersbecause my hero He Jiong is in it," she admits.

"But to my surprise, I learned a lot from the show.

"I realized I did not know the origins of many of the Chinese characters and idioms, even though they are used in our daily lives. It's fun and educational."

The challenge for Bai Yue, one of the show's directors, was to get the right mix of education and entertainment. 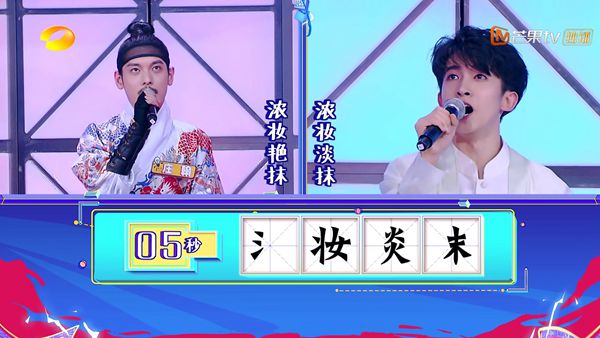 In a section of the show, contestants have to correctly name the four-character Chinese idioms in just eight seconds, based on characters' radicals.[Photo provided to China Daily]

"How to combine entertainment with knowledge was a tough issue, because we want to offer a fun learning experience for viewers," says Bai.

The show is a learning process for all, including the production team members, Bai confesses.

"We rarely write Chinese characters with pens any longer, except when signing autographs, let alone knowing the background of pictographic characters," Bai says.

"Sometimes we just forget how to write a word independently, because we rely so much on computers."

Bai's sentiment is echoed by Wang Nan, a frequent guest of the show, who is a senior editor of the Xinhua Dictionary.

With 600 million copies sold, and 11 editions, the Xinhua Dictionary has been a best-seller, and used to be the Chinese people's academic work to constantly refer to if they wanted to learn new words or when they didn't know how to write a Chinese character.

Wang works with the Institute of Linguistics under the Chinese Academy of Social Sciences, which compiles the dictionary.

She's one of the language experts and teachers invited on to the show to explain the characters' meanings and origins.

"People today tend to type words rather than write them, ignoring the meaning behind each character and its origins," says Wang, who obtained her master's degree from Shaanxi Normal University in 1995 with a major in lexicography. "Chinese characters are beautiful. Calligraphy, for example, is the ancient art of beautiful writing," Wang says.

"We need people to regain their passion for the characters."

The production team selects words in common usage, but for many people it's still a challenge, Wang says.

Chinese characters are one of the earliest forms of the written language anywhere in the world, and "each character can take you on a fascinating journey through history and culture", she adds.

Chinese idioms, often with four characters in a group, also appear in the show.

"Many new words appeared as society evolved, and some of the old words got new meanings," says Wang.

As an example she cites yiguan qinshou, literally "clothes and caps, birds and beasts", which refers to a person who looks dignified outside but is a brute inside.

Yet, in the Ming Dynasty (1368-1644), the idiom described the elaborate, well-tailored clothes of officials.

To reach a younger audience, the production team released cartoons online based on the experts' explanations about characters.

Stars, including actor Wang Hedi and singer-songwriter Zhong Yixuan, have also appeared in the show to attract a younger audience.