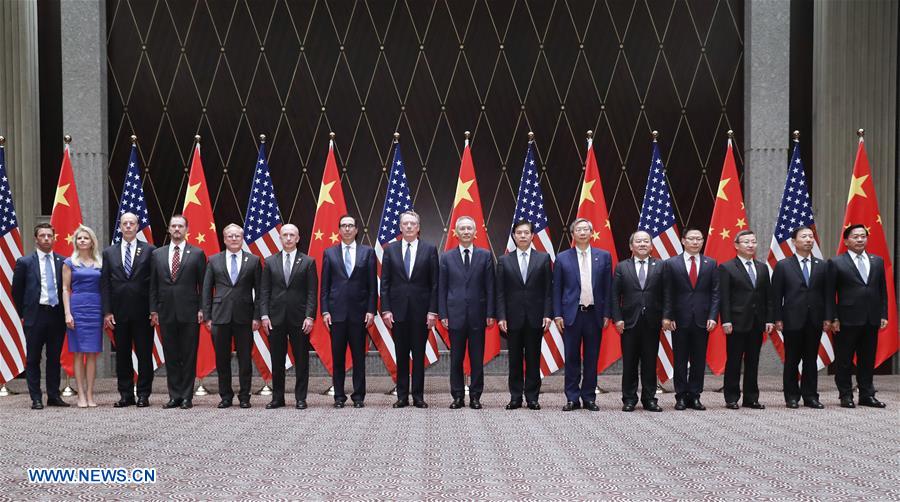 Chinese Vice Premier Liu He (8th R), also a member of the Political Bureau of the Communist Party of China Central Committee and chief of the Chinese side of the China-U.S. comprehensive economic dialogue, U.S. Trade Representative Robert Lighthizer (8th L) and Treasury Secretary Steven Mnuchin (7th L) hold the 12th round of China-U.S. high-level economic and trade consultations in east China's Shanghai from July 30 to 31, 2019. (Xinhua/Liu Bin)

BEIJING, July 31 (Xinhua) -- The 12th round of China-U.S. trade consultations, which was resumed after a break of more than two months, concluded on Wednesday in Shanghai. In accordance with the important consensus reached at the Osaka meeting between the two heads of state, the two sides conducted frank, efficient and constructive in-depth exchanges on major issues of common concern in the economic and trade field. The two sides agreed to hold the next round of high-level economic and trade consultations in September in the United States.

The 12th round of consultations is the first face-to-face communication between negotiation teams of the two countries since the two heads of state met in Osaka and decided to resume consultations. The negotiations, which were stalled by the U.S. tariff increase in May, are overcoming this estrangement and getting back on track.

After the deadlock in May, the two sides sat down again and decided to continue the talks. This has undoubtedly convinced the outside world that starting from Shanghai, despite the twists and turns of the future consultations, as long as the two sides insist on resolving specific issues on the basis of equality and mutual respect and are more pragmatic and rational, the Sino-U.S. economic and trade consultations will continue to move forward.

Since the establishment of diplomatic relations between China and the United States, although the development of bilateral relations has gone through many ups and downs, it has been moving forward all the time, benefiting people of the two countries and indeed the rest of the world.

All parties expect that China and the United States will carry forward the spirit of the Shanghai Communique, resolve their differences through dialogue rather than confrontation, and seek a correct way to get along with each other through win-win cooperation.

Starting from Shanghai, we should also recognize the twists and turns on the road to future consultations. It will take a long time to thaw the ice of estrangement. The pressure and noise from some on the U.S. side has shown from time to time that it is bound to be a difficult process from consensus in principle to agreement. It will take more time, patience and perseverance to journey down the road of future consultations, and it will also test the political wisdom of both sides.

Favoring forward thinking, China and the United States should seize the opportunity to implement the important consensus reached at the Osaka meeting of the two heads of state through concrete actions. If we want to continue the talks, we must honor and keep our promises. This is the responsibility of great powers.

We should also adhere to principles and the bottom line, and both sides should act toward each other on the basis of equality and mutual respect, and take good care of each other's core concerns.

During this round of consultations, the two sides discussed the fact that China has increased its procurement of agricultural products from the United States in accordance with domestic needs and that the United States will create favorable conditions for the procurement, which is a signal of further goodwill and sincerity.

The fact that the meeting is held in Shanghai, the "wind vane" of the Chinese economy, sends another signal: China's economic fundamentals have not changed in the long run, and even if the external situation tightens and the pressure increases, it may become a new normal. More than a year of economic and trade friction has proved that China is capable of dealing with various risks and challenges. China's greatest contribution to the world is to run its own affairs well.