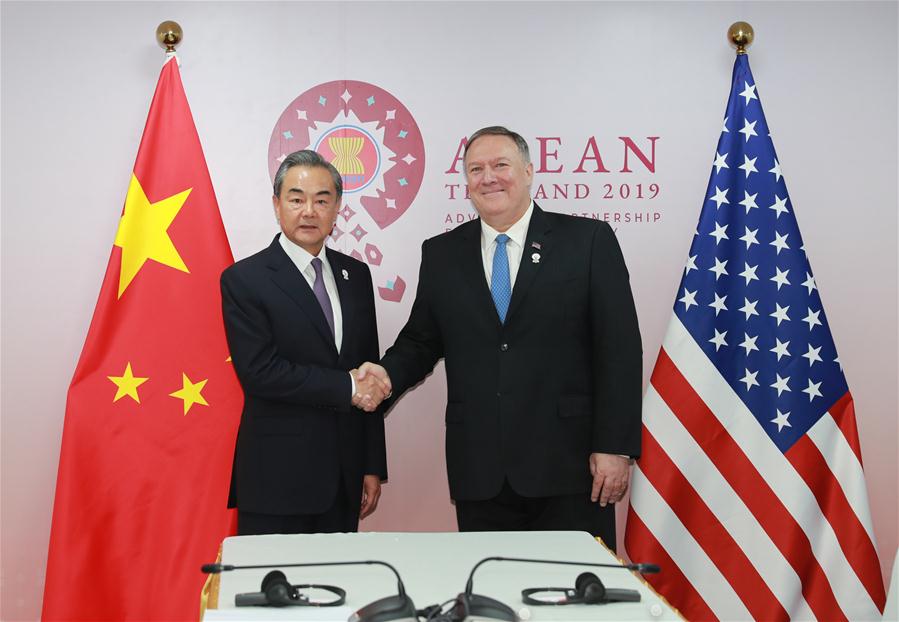 Wang made the remarks when meeting with U.S. Secretary of State Mike Pompeo on the sidelines of the Association of Southeast Asian Nations (ASEAN) foreign ministers' meeting and other related meetings.

It is the urgent matter at the moment that the United States meets China halfway to implement the consensus, manage and control the disputes on the basis of mutual respect, expand cooperation on the basis of mutual benefit, and jointly push forward the China-U.S. relationship featuring coordination, cooperation, and stability as was agreed by leaders of both countries, Wang said.

Wang recognized Pompeo's recent remarks that although China and the United States have different values, both share common interests, and there is much room for cooperation.

China also believes that both sides should strengthen communication, reduce miscalculation, and seek a win-win situation for both China and the United States as well as for the world at large, which is in the interests of both sides and is also the common expectation of the international community, said Wang.

Both China and the United States should correctly view each other's strategic intentions, Wang said, adding that it is neither fair nor possible to try to obstruct China's development.

China also has the right to develop; its development, with strong endogenous momentum, is peaceful and unstoppable, Wang said.

The two sides should give full play to the strategic leading role of the head of state diplomacy in the China-U.S. relations, make good use of all high-level dialogue mechanisms, strengthen consultations in all fields, and translate into reality the vision of the leaders of the two countries that China and the United States can become cooperative partners, he said.

The two sides should properly handle differences and sensitive issues, the Chinese state councilor said, urging the United States to strictly abide by the one-China principle and the three joint communiques between the two countries and properly handle Taiwan-related issues.

Noting that the two sides should expand cooperation in all fields, Wang hoped that the United States will facilitate personnel exchanges between the two countries rather than create obstacles.

For his part, Pompeo said the recent meeting between the leaders of the two countries pointed out the direction for the future development of the bilateral relations.

Pompeo reaffirmed that U.S. President Donald Trump and the U.S. government have no intention to contain China's development and are willing to cooperate with China in various areas. He hoped that the China-U.S. economic and trade consultations move forward smoothly.

Pompeo said that the U.S. side is committed to the three joint communique between the two countries and the one-China policy.

The United States supports enhancing the two countries' people-to-people exchanges and is willing to address issues from them, Pompeo said.

Both sides exchanged views on the Korean Peninsula issue. Wang said that China supports the important consensus reached by the leaders of the Democratic People's Republic of Korea (DPRK) and the United States at their summit in Singapore on the complete denuclearization and establishment of a peace mechanism on the peninsula.

China hopes both the DPRK and the United States will seize the opportunity to meet each other halfway and accommodate each other's concerns in a bid to formulate a feasible roadmap and promote the political solution of the Korea Peninsula issue by taking phased and synchronized steps, Wang said.

China is willing to give support and assistance to restart the DPRK-U.S. consultations, he added.

Pompeo said the United States is ready to implement the agreement reached by the leaders of the two countries in the Panmunjom meeting and restart the working level contacts with the DPRK anytime.

With regard to the South China Sea issue as well as issues related to Xinjiang and Hong Kong, Wang urged the U.S. side to respect China's core interests and major concerns and be prudent in words and deeds.

Both sides agreed to maintain contact on issues of mutual concern.