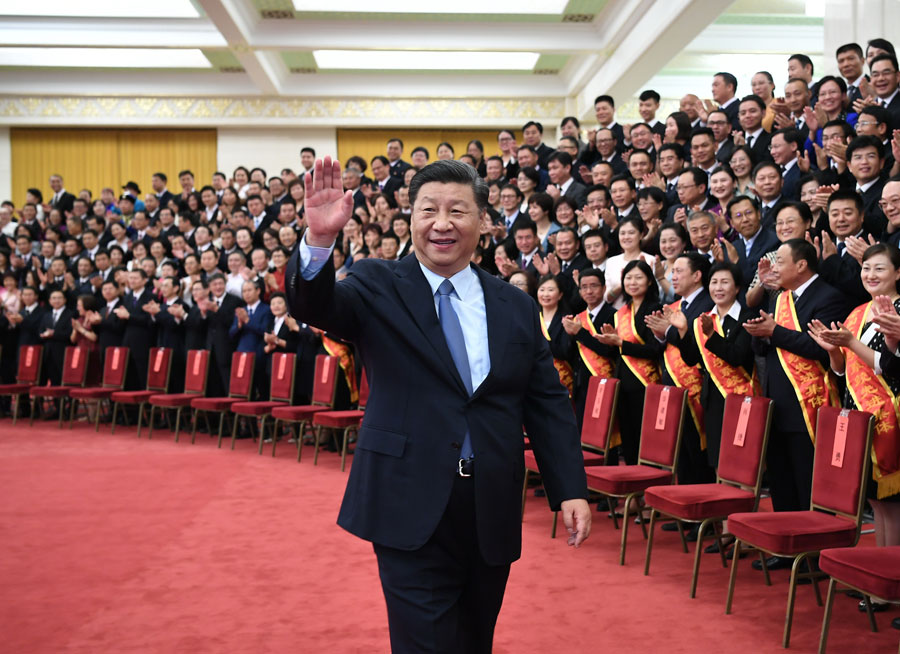 President Xi Jinping greets delegates to the Red Cross Society of China’s 11th general congress in the Great Hall of the People in Beijing on Monday. [Photo/Xinhua]

President Xi Jinping called on Monday for the Red Cross Society of China and its vast membership to carry on the spirit of humanity, universal love and devotion to make greater contributions to the Red Cross cause.

Xi, also general secretary of the Communist Party of China Central Committee and chairman of the Central Military Commission, made the remark while meeting with delegates to the 11th general congress of the RCSC in the Great Hall of the People in Beijing.

During the meeting, Xi extended warm greetings and congratulations to the delegates, and he encouraged them to make new and greater contributions through hard work and innovation.

The RCSC, established in 1904, has more than 90,000 branches across China, with more than 17 million members and more than 1.2 million volunteers, according to the society.

As a major nongovernmental organization, the society is dedicated to humanitarian relief, including providing emergency rescue in case of natural disasters, promoting emergency rescue skills among the public, organizing blood and marrow donations, and assisting in medical relief for patients with serious illnesses.

Major items on the agenda of the two-day general congress include reviewing the work of the RCSC in the past five years, discussing a draft revision to the society's charter and planning for the society's development from 2020 to 2024.

In the keynote speech at the opening of the congress on Monday morning, Vice-Premier Sun Chunlan said the RCSC has made great progress in the Red Cross cause in recent years, and encouraged branches across the nation to better gather humanitarian forces, protect life and health and intensify reform and innovation.

Sun also said that efforts should be made to conduct international assis-tance and extend civil diplomacy.

On Saturday, ahead of the congress, the International Academy of Red Cross and Red Crescent, jointly built by the RCSC and Soochow University in Suzhou, Jiangsu province, was officially established.

As the first such institution in the world, the academy is expected to become a base for research, talent cultivation and international humanitarian cooperation and exchanges, according to the RCSC.