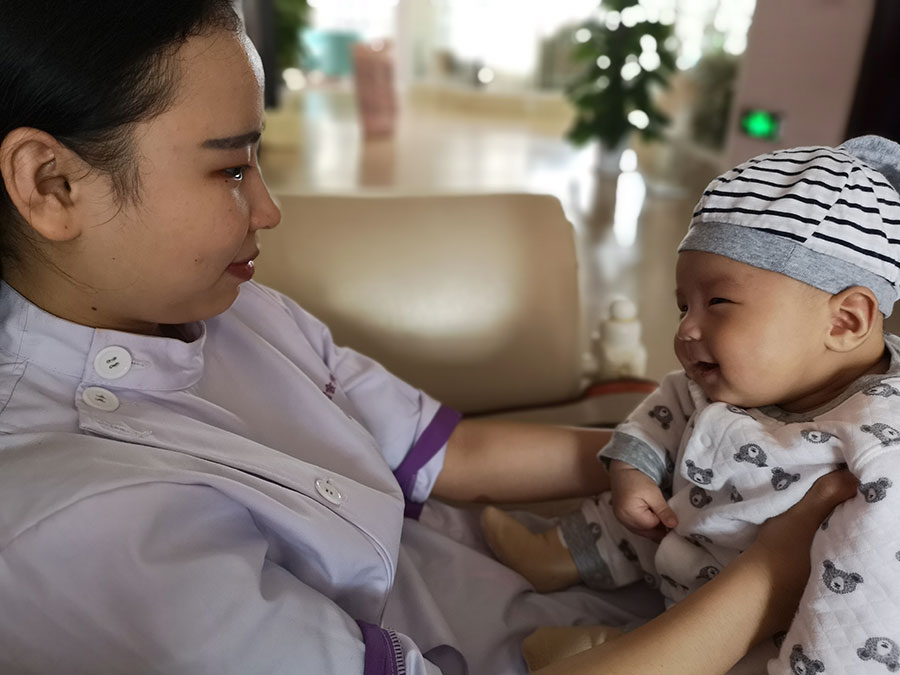 Li Huiting, a 20-year-old infant nurse, interacts with a child at a maternity hotel in Chenzhou, Hunan province, in April last year. Infant nursing is one of many new service industry jobs that have been created in the burgeoning sector. [Photo by He Maofeng / For China Daily]

Figures from the Ministry of Human Resources and Social Security show the services industry has been growing rapidly over the past five years, with the sector accounting for 46 percent of total employment last year, up from 40.6 percent in 2014.

Zhaopin, an online recruitment platform in Beijing, and Meituan Dianping, an online e-commerce platform that also conducts industry research, said in a report released recently that the new professions spawned by the burgeoning sector hint at the breadth of the nation's economic transformation and have helped ease employment pressure.

Examples of other new jobs include food delivery consultant and online business instructor.

The report said the new professions are the result of the digital revolution, which has created new lifestyles and upgraded the industry.

The high incomes and lower entry qualifications of the new professions were highlighted in the report. A survey of 9,800 people found that about 55 percent of those working in new professions earned more than 5,000 yuan ($705) a month, with 24.6 percent saying their monthly salary was over 10,000 yuan.

The qualifications required for the new professions are much lower than for some traditional positions, such as teachers and financial analysts.

The report said about 70 percent of the employees surveyed were vocational college graduates, with only 30 percent having bachelor's or higher degrees. The easier access to the job market offers people with fewer skills or less education more opportunities and stable incomes.

People born since 1980 accounted for more than 90 percent of those working in the new professions, the report said.

"Also, enthusiasm and passion for new jobs and the appeal of human contact are big reasons people are driven to join these new professions," he said.

Han Shuang, a 27-year-old from Beijing, found work as a hanfu stylist after resigning from a financial company earlier this year.

"I believe it has a promising future," she said.

"Hanfu, traditional Han Chinese clothing, was not that familiar to modern society years ago, and it used to be embarrassing to wear hanfu on public occasions because people would be scornful.

"But things have changed since last year, when wearing hanfu was recognized as a new fashion."

She said customers can receive one-stop service at her hanfu experience store at Nanluoguxiang, a tourist street in Beijing, from makeup and hair styling to dressing up.

"We offer free rooms for them to take photos in the shop and also provide paid photography services if the customer wishes to take pictures," Han said.

She said she was under a great deal of pressure when she decided to become a hanfu stylist.

"Most of the people I turned to for financial support for my hanfu experience shop rejected me at the very beginning because they didn't recognize that styling people with traditional Chinese clothing will make money," Han said.

"It's a real challenge working in a brand-new profession, but it's also interesting and meaningful as I'm doing a job that no one has done before."

Some people held stereotypical impressions or prejudices against such new professions, believing those working in them had been unable to find work in more traditional areas, and that undermined employees' passion for the work and hampered the development of the professions, Zhaopin's Li said.

The report said over 60 percent of workers who have spent up to three years in the new professions say their jobs frequently befuddle or trouble them.

"We hope the government can offer some preferential policies to improve the working environment. Vocational education and training courses for new professions are also a pressing need."