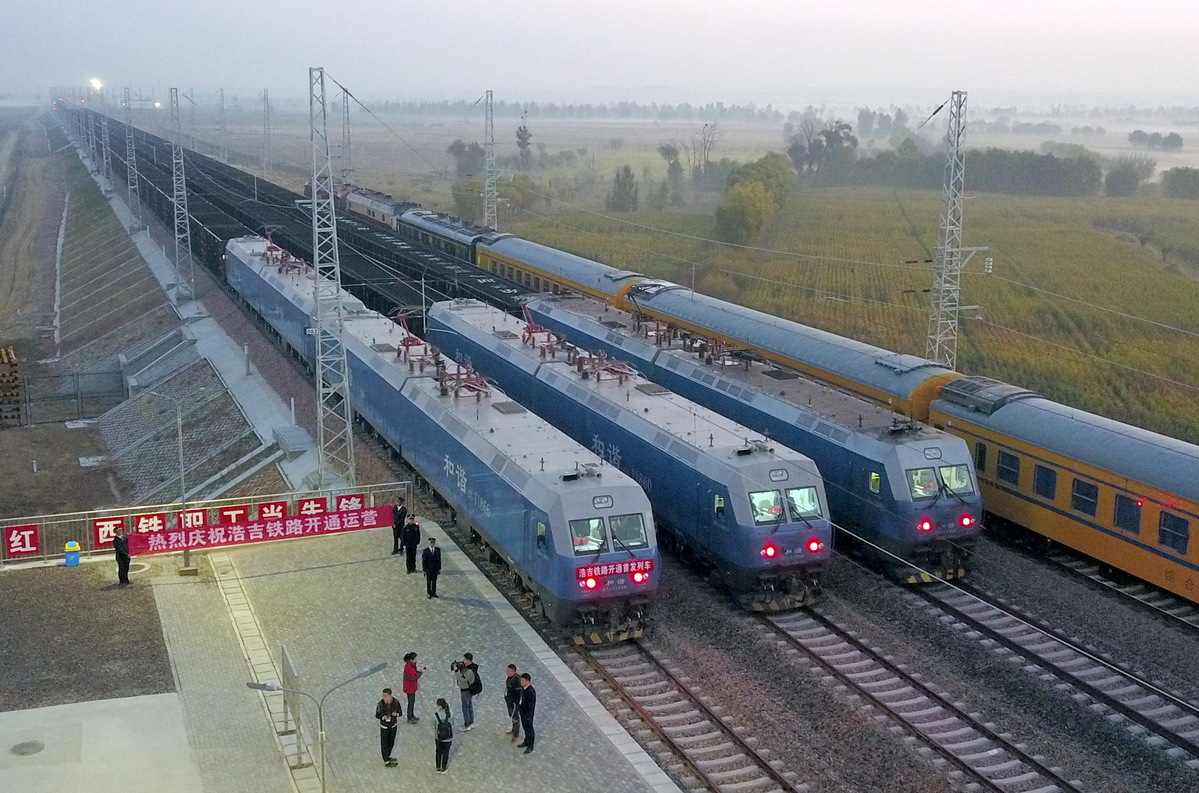 The 1,814-kilometer railway-which connects Haolebaoji South Railway Station in the Ordos, Inner Mongolia autonomous region with Ji'an Railway Station in Jiangxi province-will safeguard Central China's energy security and promote the economy of regions along the line. It will mainly be used for transporting coal from northern to central and southern China.

The electric-powered trains on the line can travel up to 120 km/h. The planned annual transportation capacity of the railway is more than 200 million metric tons.

In 2020, the line is expected to carry 60 million tons of coal from North China to the central regions, according to the China State Railway Group. The operating company has signed agreements with 42 enterprises, with each demanding 500,000 or more tons of coal per year.

China's coal resources are mainly concentrated in Shanxi, Shaanxi and the western part of Inner Mongolia, while coal consumers are mainly in central and southern China. The line will promote the development of the northern regions' resources, ensure energy supplies in Central China and improve railway energy transportation between the north and the south.

The railway project aims to better connect suppliers and consumers, according to the railway's chief engineer Li Yongjin, of China Railway Design Corporation. In the past, coal would be transported to a station and then transferred by ship or truck. Now, the Haoji Railway can deliver coal directly to factories along the line.

The railway meets the existing tracks at 12 places, including consolidation and distribution terminals. Twenty-one other projects, including a coal gathering station, combined rail-water transportation bases and storage and distribution bases have been completed simultaneously with the line. These projects will unblock the coal transportation network and promote the line's efficiency.

According to Li, the combined rail-water transportation bases are in Hubei province's Jiangling as well as Hunan province's Huarong county and Yueyang city.

Wang Jiajun, manager of Huadian Jiangling Power Co, in Hubei province, said the line will be a great convenience to coal consumers like his company and significantly shorten transportation times.

Like many other coal consumers along the Yangtze River in central China, the company bought coal from northern suppliers. The coal had to be first transported by rail to northern sea wharves. After being shipped from these wharves to ports near the Yangtze River, the coal would be transported onto riverboats and then to final destinations.

"The traditional way took about one month. The new line will shorten the time to about 24 hours and cut the transportation costs," Wang said. "The coal can be transported to our company directly."

"The line will also challenge the existing coal supply pattern and maintain the price at a stable level. The price of shipping is affected by elements like weather and waterway conditions, but the railway is quite stable," Wang added.

In addition to energy supply, the railway will help relieve poverty and speed up economic development of regions along the line.

Relying on the railway, Yan'an city in Shaanxi is building a comprehensive logistics park with an area of 400,000 square meters for commodity distribution. From the park, the railway will transport coal, oil, natural gas, agricultural and sideline products and other materials produced in Yan'an and surrounding areas to East and South China.

Industrial products, daily necessities, agricultural and sideline products from east and south China will also be spread to northwest China through the park.

The Haoji Railway will assist poverty alleviation efforts in undeveloped areas along the line, including Luoning and Lushi counties in Henan province, with several container transportation bases planned for these areas.

Cui Wensuo, a farmer in Lushi, said he and his hometown have greatly benefited from the railway. Apart from working on the construction team of China Railway No 5 Engineering Group, he also earns more than 5,000 yuan from the land created by the group through planting agricultural products every year.

Construction teams along the railway used the abandoned soil to reclaim local barren ditches and wasteland and formed over 2.44 million square meters of farmland for local villagers, who can raise commercial crops and earn extra income.