Tourism a key in poverty alleviation 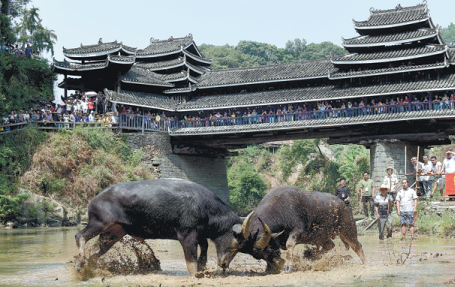 Villagers and tourists watch two bulls go head-to-head during an annual traditional bullfight festival in Sanjiang in the Guangxi Zhuang autonomous region, earlier this month. The county sees cultural tourism as a way to lift villagers out of poverty. [Photo by GONG PUKANG/FOR CHINA DAILY]

China's tourism industry has become a key factor in boosting economic development and helping alleviate poverty, according to a report released recently by the World Tourism Alliance and China Tourism Academy.

The Ministry of Culture and Tourism said that last year the tourism industry contributed 9.94 trillion yuan ($1.4 trillion) to the economy, accounting for 11 percent of national GDP.

Nearly 80 million people, 10.3 percent of the working population, were employed thanks to the ever-booming tourism industry, according to the report. It also said that tourism has been recognized as the most important industry helping people shake off poverty, especially in central and western provinces.

For example, Tianxi village in Liuyang, Hunan province, has transformed itself from an economic backwater into a charming tourism town.

In 2014, 212 of Tianxi's 1,415 households were in financial straits, and many others lost their livelihood when tree-felling was prohibited in the province in early 2016.

Tourism has since become a source of income with offerings including rural homestays and leisure activities such as fruit and vegetable picking. Moreover, the village used crowdfunding to raise 1.32 million yuan to build tourism facilities.

By the end of 2018, only 10 poor households had yet to be lifted out of poverty, and by June this year, about 90,000 travelers had generated revenue of 7 million yuan.

Li Jinzao, vice-minister of culture and tourism, said tourism-driven poverty alleviation work can bring positive results to both the economic and spiritual sectors.

"Rural tourism has become the strongest force helping villagers get out of poverty," he said. "About 4,800 people in 101 poor villages nationwide have shaken off poverty by being actively involved in rural tourism, accounting for 30.4 percent of those lifted out of poverty."

The tourism-driven poverty alleviation work has also received assistance from international organizations. For example, the World Bank financed tourism projects in provinces such as Gansu and Guizhou.

Ahmed Eiweida, World Bank global coordinator for cultural heritage and sustainable tourism, said that the organization provided support ranging from the construction of small-and medium-scale cultural infrastructure facilities and renovation of villages, to strengthening capacity and capability in the high-value agriculture and tourism sectors, which will bring new jobs, higher incomes and better living conditions.

"I believe China's experience in tourism-driven poverty reduction is valuable and applicable to many countries," he said. "We need to continue working together in documenting global best practices in poverty reduction through sustainable tourism."