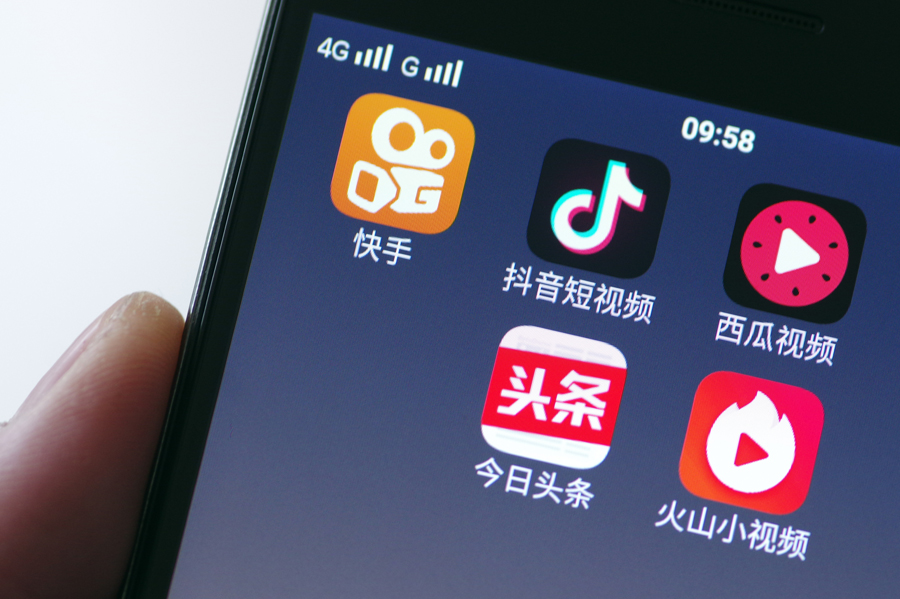 Mobile video apps including Kuaishou, Douyin, Xigua and Huoshan are displayed on the screen of a 4G smartphone. [Photo provided to China Daily]

Parents may know well that short videos can lead to addiction among teenagers. But until recently, few may have been aware that such clips could be fatally misleading.

On Sept 5, a 14-year-old girl from Shandong province died from complications involving a severe burn during her summer break. The student, only identified as Zhezhe, was injured in August while making popcorn at home using a soda can and a bottle of high concentration ethanol, a chemical her father stored at home. A 12-year-old neighbor who was with her when the explosion occurred was also injured.

Zhezhe's parents blamed food blogger "Xiaoye the White Collar" for the accident, as the girls were believed to be cooking the snack as instructed by a 222-second clip posted by the blogger when the ethanol caught fire and blew up.

In the clip, a young woman known as Xiaoye staged a scene involving a white collar worker who was running late for work and decided to cook popcorn for breakfast with things at her disposal in her office, including an alcohol lamp and a can she cut open to cook the kernels. Soon, fluffy popcorn popped out.

There were no warnings of danger posted throughout the clip.

At the time, the blogger had posted more than 140 similar cuisine videos on Douyin-a popular short video app known as TikTok overseas-and on the microblogging service Sina Weibo. She had 25.2 million followers on Douyin and 8.19 million on Weibo.

Separately, another woman in Jiangsu province was hospitalized for being poisoned earlier this month after the 51-year-old washed her hair with a diluted solution of pesticides-a practice she learned from similar clips to deal with head lice. Her hair had been shaved for treatment.

The cases have raised concerns about online celebrities making and promoting clips of experiments involving dangerous chemicals for fanfare while they and their streaming platforms fail to warn users of potential risks.

According to Zhu Wei, a communication law professor at China University of Political Science and Law, the food blogger should be held accountable because she recorded and shared the potentially risky cooking practice without providing warnings to her followers, which she should know comprise all age groups, including many teenagers and younger children.

"Influencers should be aware of the influence of their works," he said.

Zhu Jieping, a lawyer based in Chengdu, Sichuan province, said the ballooning short video industry has strained the platforms' ability to censor all user generated content.

"It's not like films, where you've got a crew to censor inappropriate messages and warn of risks," he said. "Now, smartphone users are all potential short video makers."

Some have called attention to the role of the parents in the popcorn tragedy. Liu Lin, a lawyer in Beijing, said neglectful parents are to blame and urged them to be responsible and prevent children from smoking and drinking and becoming addicted to the internet.

China had more than 79 million rural teenagers with access to the internet by the end of 2015, according to the China Internet Network Information Center. Many of them are so-called left behind children whose parents are away working in better-paying jobs in big cities.