Z-20 called one of world's best 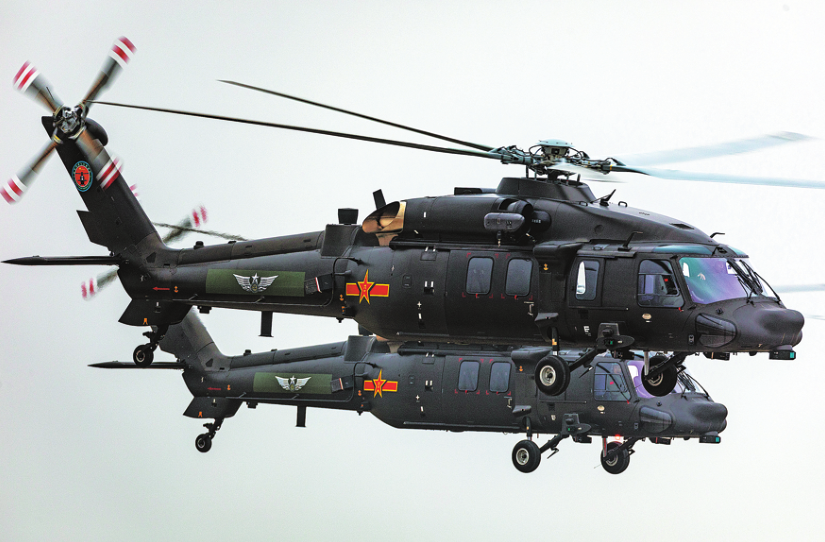 Two Z-20 medium-lift utility helicopters, the first of their kind developed and made in China, do a flyby at the fifth China Helicopter Exposition in Tianjin on Thursday. CHEN XIAO / FOR CHINA DAILY

The Z-20, China's first domestically developed medium-lift utility helicopter — declassified just 10 days ago — is one of the best of its kind in the world, according to project insiders at Aviation Industry Corp of China.

Chen Guang, vice-general manager of Avicopter, the AVIC helicopter branch in charge of the Z-20 project, said in Tianjin on Thursday that the Z-20 is a twin-engine, multipurpose helicopter designed and built exclusively by AVIC, adding that the aircraft is able to operate in many areas, and can fly in difficult weather conditions.

Powered by two advanced Chinese turboshaft engines, he said, the helicopter is mainly tasked with transportation missions but can be conveniently refitted for other operations.

Chen said every part of the Z-20 was developed and made in China.

"One of the helicopter's technological advantages is its fly-by-wire flight control system," Li said. "The adoption of such technology substantially reduces the Z-20's overall weight and makes it easier to fly."

The Z-20 was unveiled during the grand parade in Beijing on Oct 1 celebrating the 70th anniversary of the founding of the People's Republic of China. Before the parade, pictures of the aircraft had been widely circulated on Chinese weapons websites, but AVIC had never officially confirmed its existence.

It was displayed on the ground and in the air at the fifth China Helicopter Exposition, which opened in Tianjin on Thursday. The aviation expo, co-hosted by the Tianjin municipal government, the People's Liberation Army Ground Force and AVIC, has attracted participation from 415 enterprises from 18 nations and regions, according to the organizing committee.

The expo is the first opportunity for the public to get a close look at the Z-20.

Fang Bing, a retired PLA National Defense University researcher, said the Z-20 will be one of the key elements in the PLA Ground Force's transformation because it is badly needed for carrying out high-mobility air and land operations.

"Air-enabled deployment of troops and weapons relies on utility helicopters such as the Z-20," Fang said.

"Besides conventional functions, they can also be equipped with weapons to conduct combat tasks. In addition to the Ground Force, the Z-20 will be useful in the PLA Air Force and PLA Navy as it is suitable for many tasks like search and rescue, special warfare and anti-submarine operations. It will be deployed in the military in large scale," Fang added.

"It is capable of fulfilling a wide range of missions that other Chinese helicopters have difficulty executing, including anti-submarine and anti-ship combat, signal relay for ship-launched missiles and special assaults," Cui said.