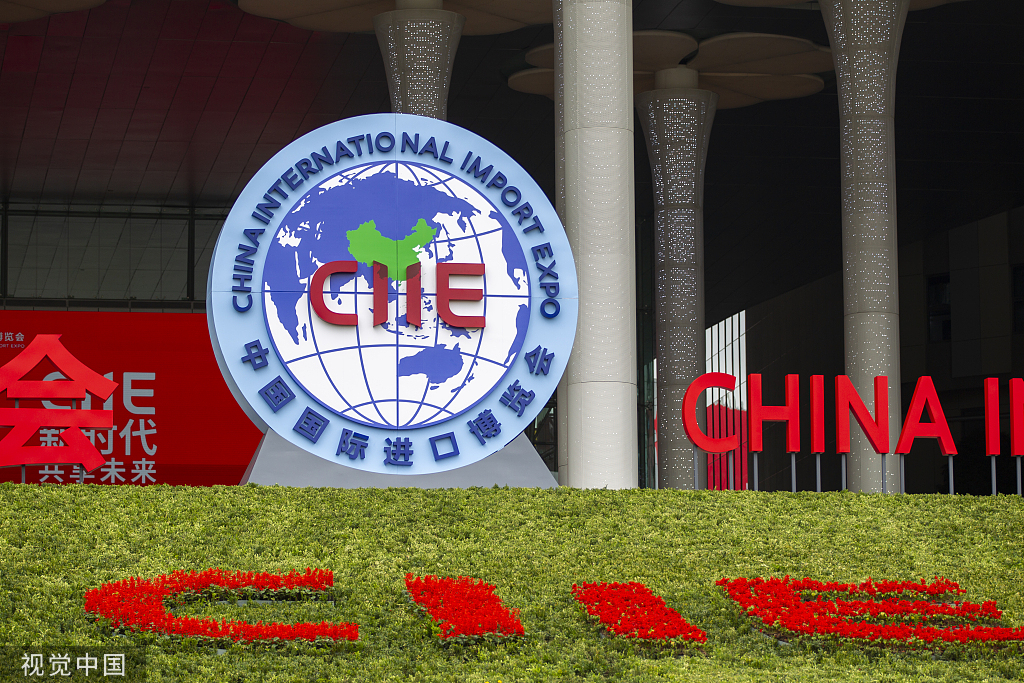 The second China International Import Expo will open in Shanghai on Nov 5. [Photo/VCG]

Last year, Panamanian pineapples first entered the country under a special arrangement for the China International Import Expo, even though they had not cleared quarantine. Shortly afterward, papers were signed — witnessed by President Xi Jinping and President Juan Carlos Varela of Panama — approving the importation of agricultural products from the Central American country.

Now, with the second edition of the expo opening in Shanghai on Tuesday, more than 3,000 enterprises from some 150 countries and regions are looking to bring products and services to China and other countries through the world's first import-themed national-level exhibition.

It will be the second year in a row that Xi will attend the opening ceremony. At this year's expo, he will deliver the keynote speech and tour various national pavilions with foreign leaders, including French President Emmanuel Macron.

At last year's opening ceremony, Xi declared: "China has a big market of more than 1.3 billion people, and it is our sincere commitment to open the Chinese market. The CIIE, an event held annually, will feature good performance, good results and continued success in the years to come."

Xu Xiujun, director of the international political economy division of the Chinese Academy of Social Sciences' Institute of World Economics and Politics, said Xi's attendance at the expo's opening ceremony two years in a row shows that "China's further opening-up is not a temporary expedient but a decision made out of far-reaching strategic considerations".

"CIIE not only provides other countries with import demand from the Chinese market but more important serves as a platform to promote trade cooperation and exchanges between China and the rest of the world," Xu said.

China's resolve to pursue high-quality development and greater opening-up has also been reinforced in congratulatory letters Xi sent to a number of events hosted over the last month.

In a letter to the first Qingdao Multinationals Summit, which opened on Oct 19, Xi said the door of China will only open wider, the business environment will only get better and opportunities for global multinationals will only become greater.

Global entrepreneurs are welcome to invest in China, strive for mutual benefits and win-win outcomes and jointly create a better future, Xi said.

The prospect of an improving business environment has been widely applauded by entities operating in the country.

During the first three quarters of the year, foreign direct investment on the Chinese mainland expanded 6.5 percent year-on-year to 683.21 billion yuan ($97.1 billion), Xinhua News Agency reported. During the period, more than 30,000 new foreign-invested enterprises were established in the country.

In another letter, this one to the Fourth Understanding China Conference, which opened on Oct 26, Xi emphasized that as a contributor to and beneficiary of economic globalization, China will remain steadfast in pursuing the path of peaceful development through an opening-up strategy of mutual benefit that will continue to boost the world economy.

China will work with other countries to promote globalization and become more open, inclusive, balanced and beneficial for all, Xi said.

A year ago, he pledged to undertake a series of practical measures to further open up China to the world in his keynote speech at the opening ceremony of the first import expo. Those measures have been carried out over the past year, shaping a more open, stable and promising Chinese market.

The central government has adjusted duties on import items several times and shortened its negative lists to promote greater opening-up. Since China's new Foreign Investment Law was approved in March, local governments and departments at all levels have launched a series of measures to support the development of foreign enterprises.

Stefano De Pascale, director of Federorafi, the National Gold Jewelry Manufacturers Association of Italy, told China Radio International online that the association will display high-end jewelry and showcase advanced manufacturing techniques and capacity in an exhibition area of more than 150 square meters at this year's expo.

According to Pascale, the tariff rate on the European Union's jewelry exports to China had remained between 20 to 30 percent for a long time, but the rate has fallen to 8 to 10 percent since June last year.

"In the first half of this year, Italy's jewelry exports to China increased 43 percent compared with the same period last year," he said. "We appreciate the Chinese government's various efforts in promoting trade liberalization. Such efforts not only benefit China but also boost global trade liberalization. The CIIE is an example."

In the World Bank's Doing Business 2020 report published on Oct 24, China ranks 31st this year in ease of doing business — a leap from 46th place last year and 78th the year before. China is also among the top 10 economies whose business environments improved most, the second year in a row.

In a meeting with German Chancellor Angela Merkel in September, Xi said that China has honored its commitment to further open up, with its commitment expanding from manufacturing to the financial and service sectors.

The Chinese market is large and will become even larger as it develops, Xi said, noting that China's opening-up will bring more opportunities to all countries.

Xu, of the social sciences academy, said that even as the world faces challenges brought by economic downward pressure and rising protectionism and unilateralism, China continues to expand opening-up.

"This reflects the country's firm determination and confidence to open up and also its status as a responsible country," he said.

China has set a good example for other countries in terms of promoting development and boosting global economic stability and prosperity through opening-up, he added.

Staff members talk about railway exhibits at the China pavilion of the Second China International Import Expo in Shanghai on Saturday. The expo will open on Tuesday.