China's Singles' Day, a shopping event akin to Black Friday and Cyber Monday in the United States, was first designed by Alibaba's e-commerce platform Tmall on Nov. 11, 2009. Over the past decade, the online shopping event has developed from a domestic online sales promotion to a global shopping carnival.

The total sales on the Singles' Day last year was 213.5 billion yuan.

Figures released earlier Monday showed that sales hit 10 billion yuan after just one minute and 36 seconds into Monday. And it only took one hour, 26 minutes and seven seconds to hit 120.7 billion yuan, exceeding the total sales on Singles' Day in 2016.

Those figures have caused some raised eyebrows as many believed that there would be a fall in sales amid China's slower growth. 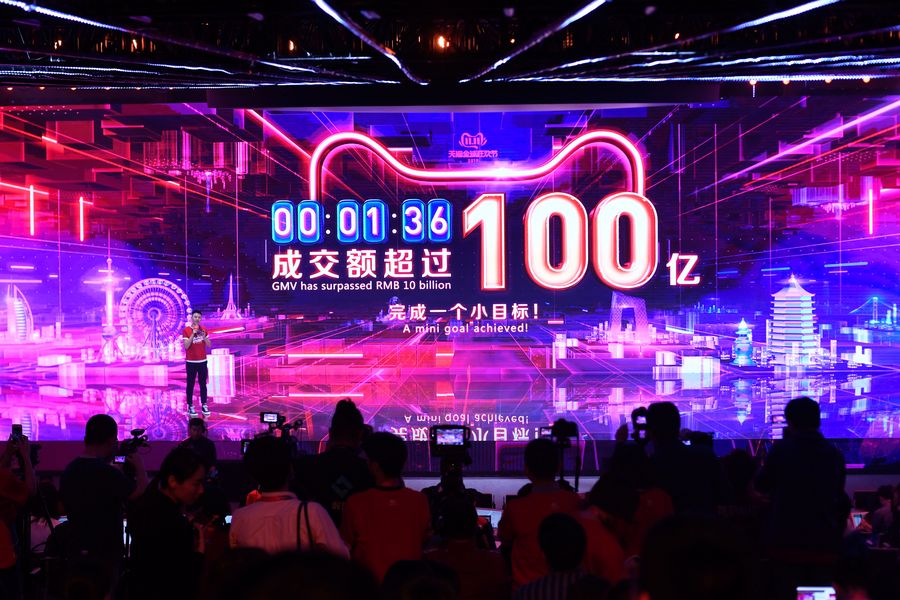 The giant screen shows that Tmall reached a 10 billion yuan worth of sales in 1 minute and 36 seconds on Singles' Day at the media center in Alibaba Group's Xixi Park, in Hangzhou, Zhejiang Province, Nov. 11, 2019. (Xinhua/Huang Zongzhi)

The Singles' Day shopping festival on TMall, which was first designed by Tmall on Nov. 11 in 2009, has now become one of the largest online shopping sprees worldwide.

At its peak, 544,000 orders were placed in one second on TMall, setting a new record for peak online traffic in the world, according to Alibaba.

The new records reflect China's rising economic strength, as well as the benefits of technology development and global trade, said Zhou Mi, a researcher with the Chinese Academy of International Trade and Economic Cooperation affiliated to the Ministry of Commerce.

"As a whole, the purchasing power of Chinese customers is on the rise, enabling them to buy more high-quality products," said Zhou. "Meanwhile, technology development and more robust global trade have also helped lower the price of commodities." 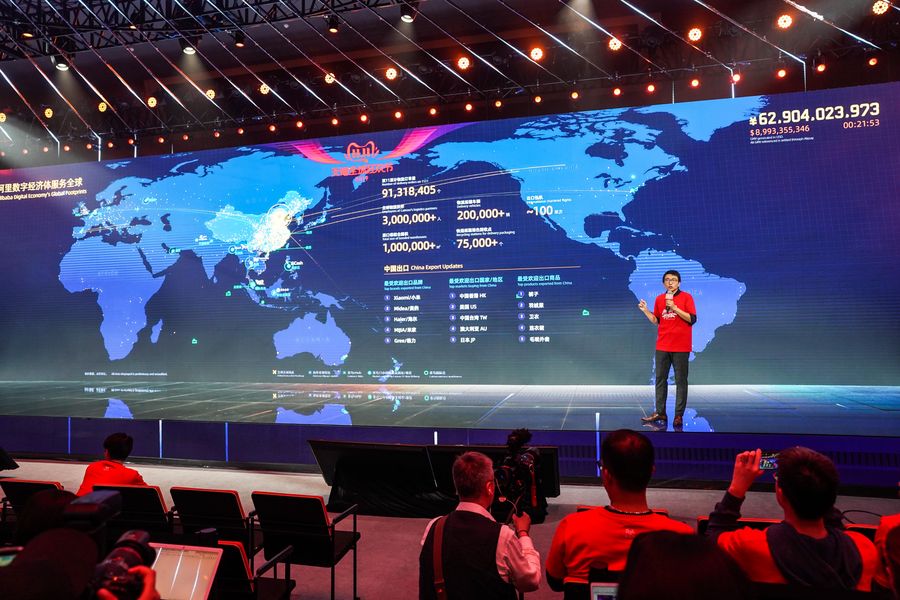 A staff of the Alibaba Group speaks in front of a giant screen showing the real-time sales data of Tmall on Singles' Day at the media center in Alibaba Group's Xixi Park, in Hangzhou, Zhejiang Province, Nov. 11, 2019. (Xinhua/Yin Xiaosheng)

More than 22,000 overseas brands from 200 countries and regions participated in this year's shopping spree in China, according to Alibaba.

Among the 148 brands with a turnover of over 100 million yuan in the first two hours of transactions on Monday, more than 80 were domestic brands, accounting for more than half of the total.

"Many products made or designed in China are both appealing and of high quality, and they also have the potential to be trendsetters," said Li Shengchao, a marketing director at TMall's clothing section.

Over the past decade, the shopping festival is no longer a carnival for Chinese consumers but has now become a feast for participants from all over the world.

Consumers from over 200 countries and regions celebrate the shopping carnival via platforms such as AliExpress, an international online shopping platform under Alibaba, Lazada and Tmall Global. 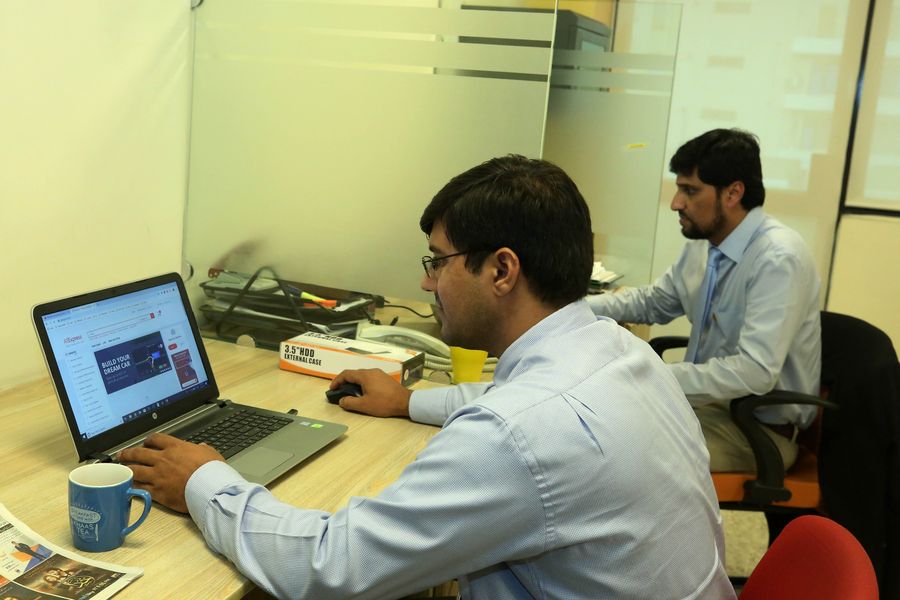 A Pakistani man visiting the AliExpress website in Islamabad, capital of Pakistan on Aug. 20, 2019. (Photo by Ahmad Kamal/Xinhua)

Ibrahim Hussein Ali, a Somalian comedian residing in China, said he spends thousands of yuan on clothes and electronic devices on Nov. 11 every year.

Expecting such online shopping platforms in his homeland Africa, Ibrahim said he hopes China and Africa can offer their quality products to each other more conveniently in the future.

Apart from multinational giants such as Johnson &Johnson, Procter &Gamble and Nestle, an increasing number of small companies from Europe, Asia and Africa, have expanded their presence in the shopping gala.

Nearly 1,000 foreign web celebrities broadcast live to all parts of the world 24 hours a day in dozens of languages, which has been considered as a remarkable role in stimulating global consumers' shopping desires. 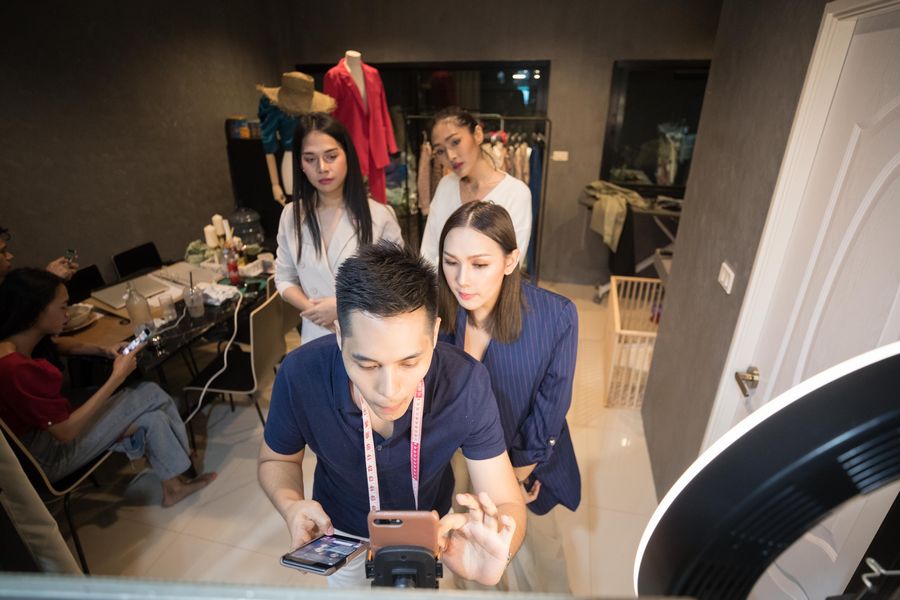