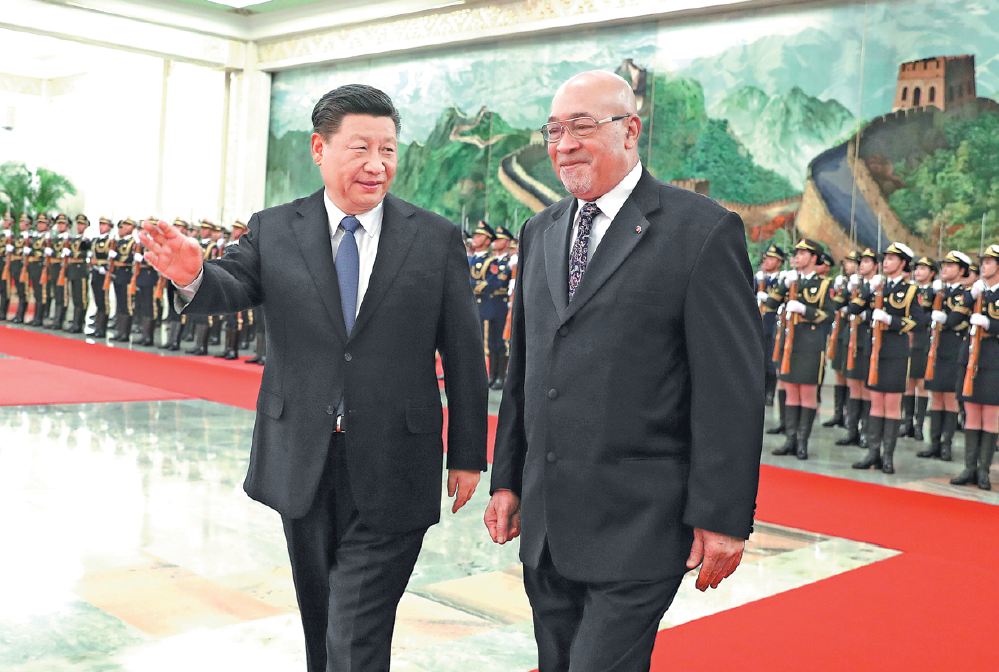 China would like to make efforts with Suriname to jointly build the Belt and Road to promote bilateral ties to a higher level, President Xi Jinping said on Wednesday.

Xi made the remark while meeting with Suriname's President Desire Bouterse at the Great Hall of the People in Beijing. Bouterse is making his first state visit to China from Wednesday to Saturday at Xi's invitation.

Witnessed by the two presidents, China and Suriname signed a number of cooperation documents covering such issues as jointly building the Belt and Road and mutual visa exemptions. The two leaders also announced the establishment of the China-Suriname strategic cooperation partnership.

Since the establishment of diplomatic ties 43 years ago, China and Suriname have supported, understood and trusted each other, Xi said.

The China-Suriname relationship has always taken the lead in China's relations with Caribbean countries, and it has set a model for the friendly and equal treatment between countries of different sizes, he said.

Xi stressed that the two countries should continue to understand and support each other on issues related to the other side's core interests and major concerns.

China will also continue to support Suriname's efforts to safeguard its national sovereignty and speed up economic and social development, Xi said.

Xi proposed the two countries deepen cooperation in traditional areas such as infrastructure, agriculture, telecommunications and energy, and expand cooperation in new fields, including new energy, digital economy, tourism and the sustainable use of ocean resources.

China encourages more of its companies to invest in Suriname, and the two sides should boost people-to-people exchanges as Suriname is a country with one of the largest Chinese populations in the Caribbean area, Xi said.

The two countries should strengthen education and law enforcement cooperation, and China will send medical experts to Suriname, he added.

The two countries maintain communication and coordination on global issues, practice multilateralism, build an open global economy and safeguard the interests of the two countries as well as other developing nations, Xi said.

China supports the integration process of Latin America and encourages countries in the region to resolve problems through dialogue and coordination, he added.

The rapid development of China-Latin America relations has brought real benefits for the two sides, and it has also contributed to regional prosperity and stability, Xi said.

Bouterse offered his congratulations on the 70th anniversary of the founding of the People's Republic of China, saying that socialism with Chinese characteristics for a new era will definitely achieve success.

Suriname and China have had historical and cultural interactions for more than 160 years, he said, adding that his visit strongly demonstrates the mutual political trust between the two countries.

During their talks, Bouterse underlined the importance of working together under the framework of the Belt and Road.

Before their talks, Xi hosted a grand ceremony to welcome the Caribbean leader.

Premier Li Keqiang said while meeting with Bouterse that China would like to enhance political mutual trust and promote practical cooperation with Suriname.