China's rural revitalization strategy is helping revamp the countryside, achieving the basic modernization of agriculture and rural areas by 2035, and the grand goal of a strong agricultural industry, beautiful countryside and well-off farmers by 2050.

NANCHANG, Dec. 1 (Xinhua) -- Rural revitalization strategy in east China's Jiangxi Province has created jobs that are changing the life of local villagers who might never dream of it before.

Cao Jiaxiang, 44, is a photographer in Huangling Village, Wuyuan County in the province. Although he dreamed of becoming a photographer ever since he was a child, Cao's dream only came true seven years ago. 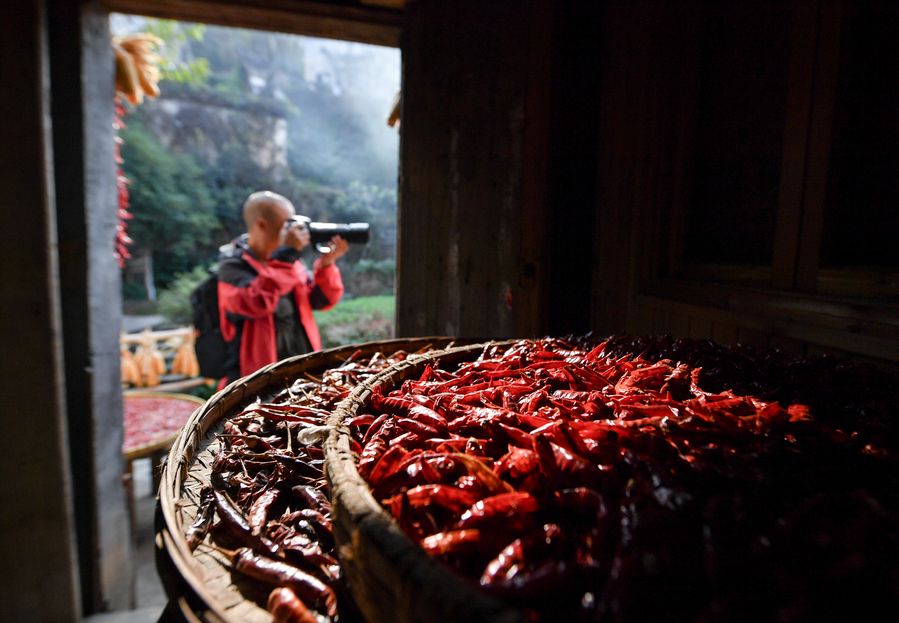 "Our village used to be very poor, so I had no choice but to leave the village for work after I graduated from high school," he said. The mountain village was mired in poverty due to its isolation and frequent natural disasters.

However, the village has been changing in recent years thanks to the country's rural revitalization strategy that aims to boost the development of agriculture, promote rural employment and increase farmers' incomes.

Boasting rich tourism resources including centuries-old architecture, the village has been developing the industry with government support, and is estimated to receive about 1.4 million tourists in 2019. 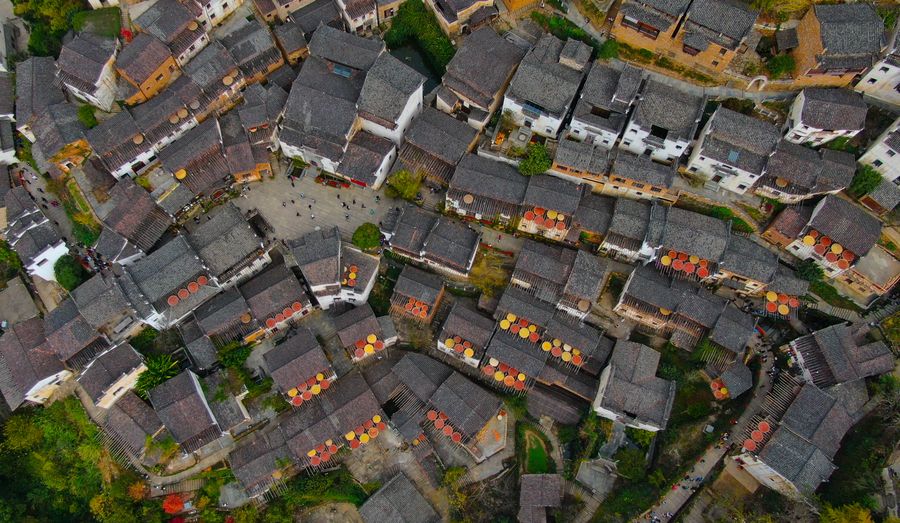 In 2012, Cao quit his job in a garment factory in Zhejiang Province and went back to the village working as a photographer for the local tourism administration. He is collecting old photos from villagers and shooting new ones from identical angles to show the huge changes that have taken place in the village.

"I never thought that I could make my dream come true in my home village and record the changes here with my camera," he said.

Cao Xixiang, 58, is now a popular attraction in her own right, performing local agricultural customs for outside visitors.

Wearing a kerchief and an apron, Cao Xixiang dries farm produce including chili and pumpkin in bamboo baskets in the bright sunshine. The custom has become a must-see performance for tourists visiting the village. "I can make a living by performing since the village became a tourist attraction," she said. 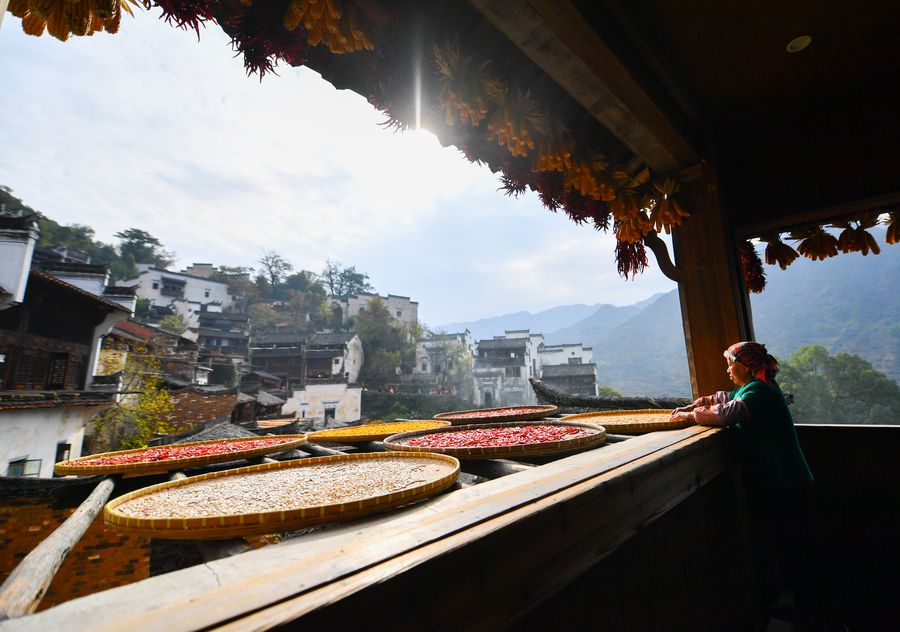 Nearly 200 villagers, including Cao Xixiang, have been employed to perform local customs for tourists. The village's annual per capita income has increased to 45,000 yuan (6,402.78 U.S. dollars) from 3,500 yuan since the development of the tourism industry.

Around 70 km away from Huangling in Zheyuan Town, villager Zhan Youshe and his buffalo have become unlikely models for photography enthusiasts.

"I have come to Wuyuan County at least twice a year for the past 15 years," said Toku Chou from the Photographic Society of Taipei. "The ancient elements of the villages in the county have remained unchanged for centuries, which is what we are looking for." 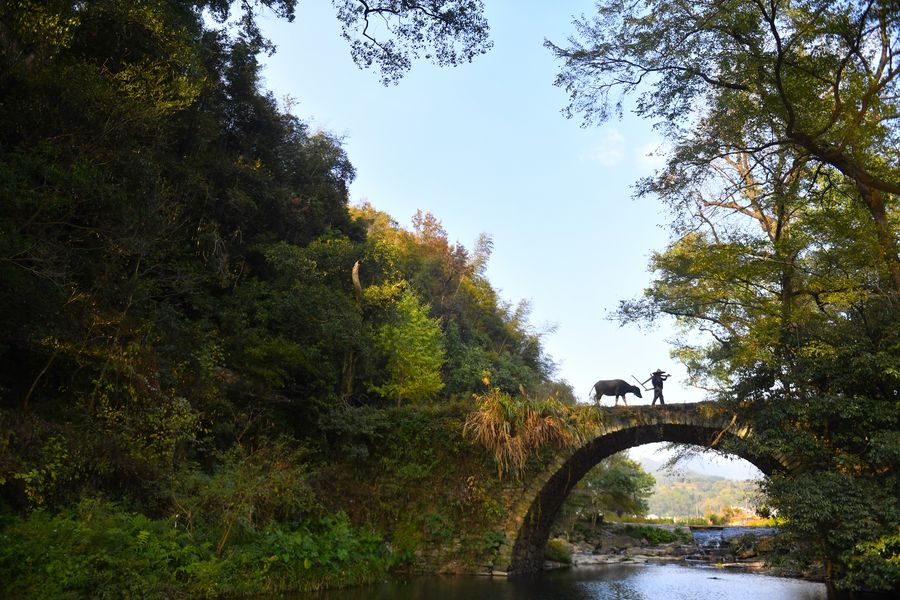 Wuyuan has more than 4,000 well-preserved centuries-old Hui-style buildings from the Ming and Qing dynasties (1368-1911) that feature black roof tiles and white walls with detailed carvings. The county is combining the protection of ancient architecture and the development of cultural tourism to achieve sustainable development.

China's rural revitalization strategy is helping revamp the countryside. The strategy was first put forward during the 19th National Congress of the Communist Party of China (CPC) in 2017 and has been repeatedly stressed by the Chinese leadership ever since. 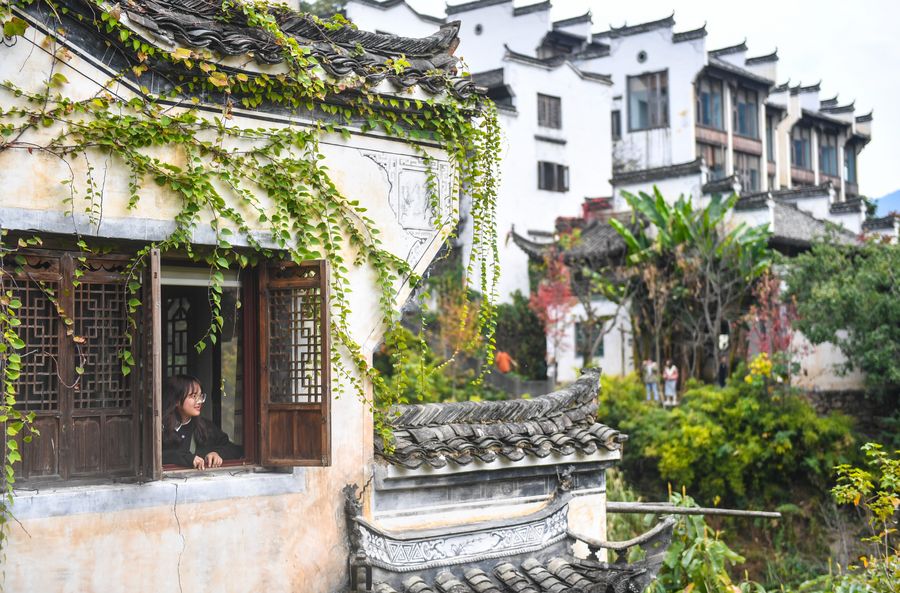 A tourist looks out from a building in Huangling Village of Wuyuan County, east China's Jiangxi Province, Nov. 7, 2019. (Xinhua/Hu Chenhuan)

The strategy aims at achieving the basic modernization of agriculture and rural areas by 2035, and the grand goal of a strong agricultural industry, beautiful countryside and well-off farmers by 2050.

Under this initiative, the rural areas in China are rapidly transforming, with agriculture developing fast, rural tourism booming and migrant workers returning home from coastal areas to make a living.