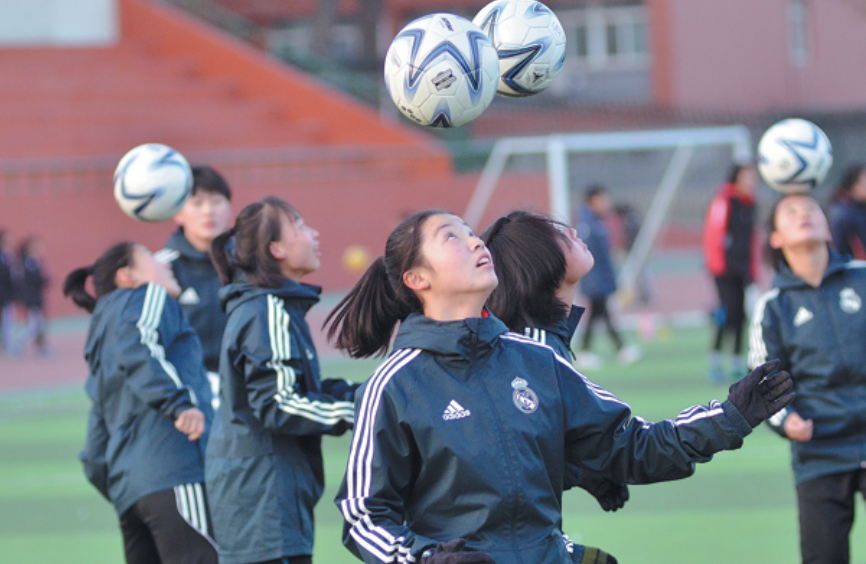 Coach Wang Zhanjiang was thrilled almost to tears when her team won, by 2-0, the girls' final of the 2019 national high school soccer championship in October in Changsha, Hunan province.

That means the teenage players would represent China at a worldlevel game, the International School Sport Federation's World School Championship in soccer, though the game has not yet been scheduled.

"I can't believe we won another championship. It's like winning a lottery," said Wang, who has been a coach for almost 10 years at No 1 High School of Baoding, Hebei province.

The team won its first championship in the girls' final of the China High School Football Championship, one of the country's most important soccer events for teenagers, in November last year. This qualified the team to play for China at the ISF's 2019 World School Championship in Belgrade, Serbia, in April.

They finished fifth among 16 teams, which they consider to be satisfactory.

Before 2018, however, the school's soccer team, founded 37 years ago, had never won a national championship.

"Going abroad is already unbelievable, not to mention that we have made it into the top eight players' list for the final," said Wang.

The 38-year-old coach was a professional player on Hebei's provincial soccer team for 12 years before joining No 1 High School of Baoding as coach.

Wang recalls how her French coach, who trained her three years ago during a three-month training program in France, was surprised to see her and her team at the game in Serbia.

"You know, I just came from an ordinary school in a small city," Wang said, adding that the French team ranked second in the Serbia championship.

After the Serbia game, her French coach expressed the hope to see her again at the next championship event.

Wang said she has noticed the gap between her players and their peers from other countries, whom she described as "more skilled, more experienced in international games. And they are physically stronger."

However, she added, "We will meet again on competition grounds."

Wang sees fighting spirit as the key to winning the national game.

"We never give up. The players always stand up again after falling on the ground," she said.

The school's high school team has won championships of different national-level competitions five times since the first one in 2018.

Li Baoxue, the school's president, said, "It's really not a lottery win, but a burst of power based on accumulated strength."

Love of soccer, from the school's six coaches and players alike, is one of the key reasons they won the national championship, Li said.

"That's why players can endure harsh training, and Zhen Jinzhu, the head coach, can continue his career for over 30 years, during which he has had to overcome multiple difficulties," Li said.

At the end of the 1980s, according to Li, lack of competition and neglect of soccer education led to many schools discontinuing soccer training. The boys' team at the school did so, since its coach considered it meaningless to practice if there were no games.

Although the girls' team had never won a championship before 2018, the school's persistence in soccer training kept the team atop the provincial level for about 10 years, Li said.

The school is planning to build another field for its soccer teams and resume training for boys as well, said Li.

Wang has followed a tradition started by her coach, Zhen, who cultivated two players for China's women's national soccer team, Wang Liping and Liu Shanshan. Since 1984, Zhen has insisted on a strict training schedule for players－150 in all, including the high school's players and those from nearby primary and middle schools.

Players need to get up at 5:30 am and start training for physical strength and technique from 6 am to 7 am. They repeat the routine from 4:30 pm to 6:30 pm, six days a week, according to Zhen, who is now 58 years old.

"Nothing can stop him, not even snow or rain," said Wang Lisuo, the deputy president of the school who is in charge of sports education.

"There's a crazy enthusiasm in this man for soccer, for which he always sees good players as treasures," Wang added, noting that Zhen has often gone to different primary schools in the city to select promising players.

Zhen asked Wang, one of his best players, to work at the school after she retired from the provincial team in 2010. "The tradition needs to be passed down," he told her.

Strict and tiresome training often scares parents and players away.

"Most parents would refuse us directly, while some players would give up within a month after joining the training," Zhen said, adding that recruiting new players is the most difficult part.

Some parents are also concerned that practicing soccer will take away from their children's study time.

"They think playing soccer will not give their kids a bright future," Zhen said.

Parent He Na, who is from a village in Gaoyang county in Baoding, allowed her 10-year-old daughter to join the school's soccer team six years ago, because only in this way could her daughter be admitted to the school.

"This school can provide much better education than those in villages," He said.

According to He, girls chosen by the coaches can study at primary and middle schools near the high school for the convenience of training, and they can go directly to the school after graduating from middle schools.

But He never thought her daughter Zhang Aijing would one day become one of the school's championship-winning soccer players.

"After graduation, I believe she can easily be admitted to good universities as a sports student," she said, adding that she wants her daughter to continue playing soccer.

More than 200 universities recruited girls' soccer players this year－about twice the number in 2018, according to coach Zhen.

"This is a good sign that our country is putting more importance on soccer," he said, adding that he is not as worried as before about recruiting players with potential.

As a defensive midfielder on the school's high school team, Zhang Aijing said she could never have imagined a national championship or even playing in an international game.

"Playing soccer is more interesting than just learning knowledge in the classroom," she said. "And I can become physically stronger."

Zhang, who fell in love with soccer after she began training in the fifth grade, added that the biggest benefit she has received from playing soccer "is the team spirit".