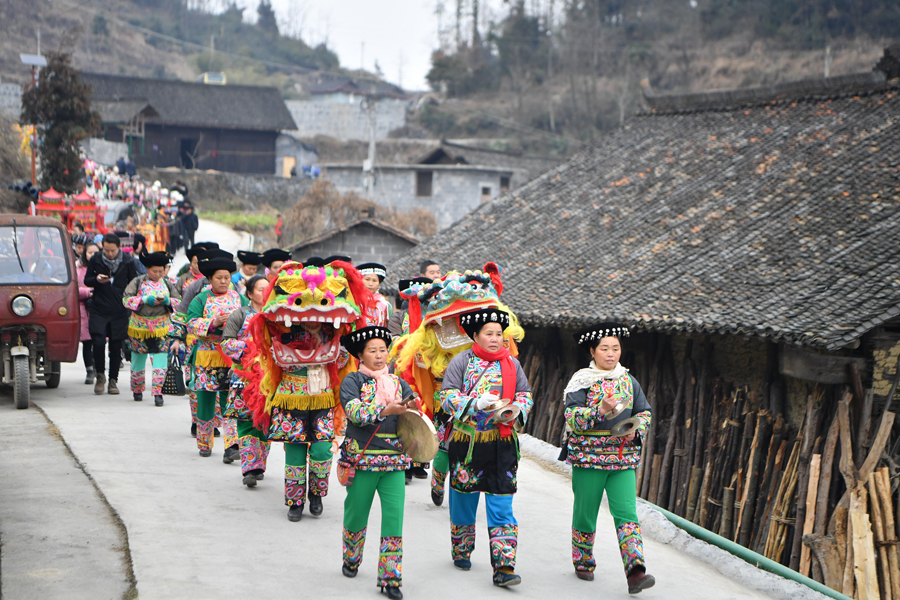 Two pairs of newlyweds have a Miao ethnic wedding in Shibadong village, Hunan province. Such celebrations have drawn tourists from all over China. [Photo/Xinhua]

The prize was a reward given by his village in Central China's Hunan province for helping his neighbors.

Having worked in big cities for 16 years, Yang is regarded as a person who has "seen the outside world" by his fellow townsmen. Now he serves as one of the 41 leaders of mutual support groups in Shibadong, a mountainous village of the Miao ethnic group in Xiangxi Tujia and Miao autonomous prefecture, where China's targeted poverty alleviation campaign was first launched in 2013.

The village dropped its "poverty-stricken" label in 2017. Its net per capita income increased to 12,128 yuan last year through industries such as rural tourism, cultivation and Miao embroidery, up from a paltry 1,668 yuan in 2013, which was below the country's poverty line of 2,300 yuan.

Like many poor villages in China, Shibadong has not only shaken off its economic worries with the help of targeted poverty alleviation, but also has started to explore its own path to realize rural revitalization. However, some contradictions have been exposed in the process.

"Some villagers of ethnic minorities are not good at expressing themselves, while some villagers cannot fully participate in the rural construction even if they want to because they have no administrative posts," said Ma Huihuang, head of the poverty alleviation work team in Shibadong.

Ma realized that the traditional governance model was not sufficient to meet the current demands of rural development.

The village then elected 41 key Party members and talents as team leaders, each of whom is responsible for five households. These mutual support groups were established based on geographic proximity, industry background, common interests and complementary advantages.

Shi Basan, a 69-year-old woman in Shibadong, also a member of Yang's group, used to only speak the Hmong language (the language of the Miao ethnic group), but now she can communicate with tourists in simple Mandarin thanks to Yang's teaching and patient guidance.

In addition to helping his own team members, Yang also took the initiative to help share the burdens of other group leaders.

During the previous Spring Festival, Yang assisted another team leader to help release a fundraising message and raised a total of 100,000 yuan in donations for a villager whose house and belongings were destroyed in a fire.

"I wanted to do something for the village and I was afraid people would think I was meddling. Now that I'm a team leader, I should be a role model," Yang said.

Long Shuwu, Party chief of the village, believes that the mutual support model not only provides opportunities and platforms for ordinary Party members who want to take on responsibilities, but allows the villagers to know what the Party members have done for them, effectively resolving the contradictions present in the previous form of grassroots governance.

In addition, relying on the village-level collective economy, the villagers of Shibadong can get "points" through group activities and use them as coupons to exchange for daily necessities.

On Nov 3, Yang Zhengbang was recognized by the village for his outstanding contributions to the mutual support model at a ceremony held in Shibadong. After receiving the prize, he promptly donated it.

The exploration and practice of the new model of grassroots governance in Shibadong has set a good example for other villages in Xiangxi Tujia and Miao autonomous prefecture. Today, more than 50,000 rural Party members in Xiangxi are closely connected with the masses, setting up more than 25,000 mutual support teams and incorporating more than 130,000 rural households.

All across China, with the leadership of the CPC and innovative modes of grassroots governance, more villages like Shibadong have emerged in recent years.