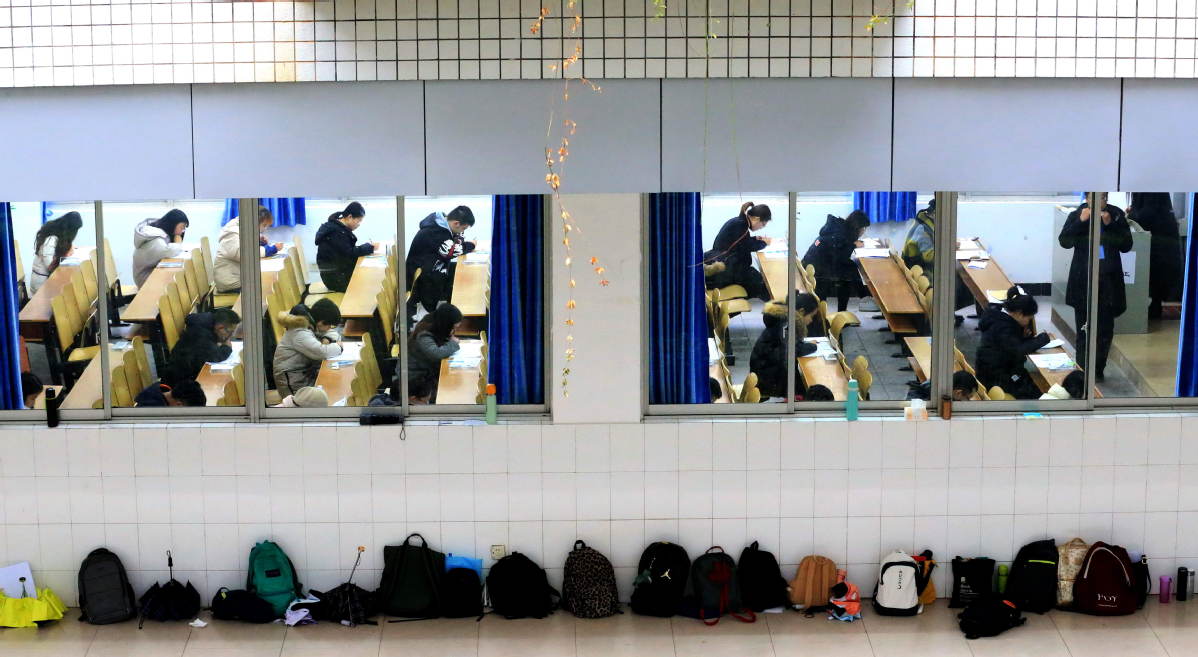 Applicants take the national exam for postgraduate studies at the University of South China in Hengyang, Hunan province, on Dec 22, 2019. [Photo/Xinhua]

A total of 3.41 million people were expected to take part in China's 2020 national entrance exam for postgraduate studies from Saturday to Monday, 510,000 more than last year, the Ministry of Education said.

That's a rise of 17.5 percent, and with a record 8.74 million university students expected to graduate next year, a survey by education website eol.cn found that growing competition in the job market was the primary reason for the increase.

Asked whether postgraduate study would help them find a job, 57 percent of exam applicants said they believed it could make them significantly more competitive in the job market, 42 percent said it would be somewhat helpful, and only 1 percent did not expect it to improve their chances.

Zhang Sijia, 22, a senior majoring in accounting at the University of Science and Technology Beijing, said she wants to study finance at Central University of Finance and Economics, also in Beijing.

"It's not like I cannot find a job if I enter the job market now, yet I think a master's degree in finance will give me better opportunities to land a high-paying job," she said.

Many jobs have higher academic requirements nowadays, she said, and a master's degree is now somewhat comparable to a bachelor's degree 20 years ago.

"Almost half my classmates have signed up for the exam, as pursuing higher degrees has become inevitable if you want to find a decent job," Zhang said.

However, the report said students would find it harder to enroll for postgraduate studies.

Although universities have increased their enrollment of postgraduate students, the growth rate is much lower than that of the number of applicants, and the overall student enrollment rate is expected to decrease to a 20-year low of 25 percent next year, down from 27.6 percent this year, the report said.

Qin, who graduated from Wuhan Sports University in June, said: "When I took the exam last year, I was fully prepared that I might fail and I would have started to search for a job right away. The exam does not define who you are. Even if you fail, you can always try next year or start working."