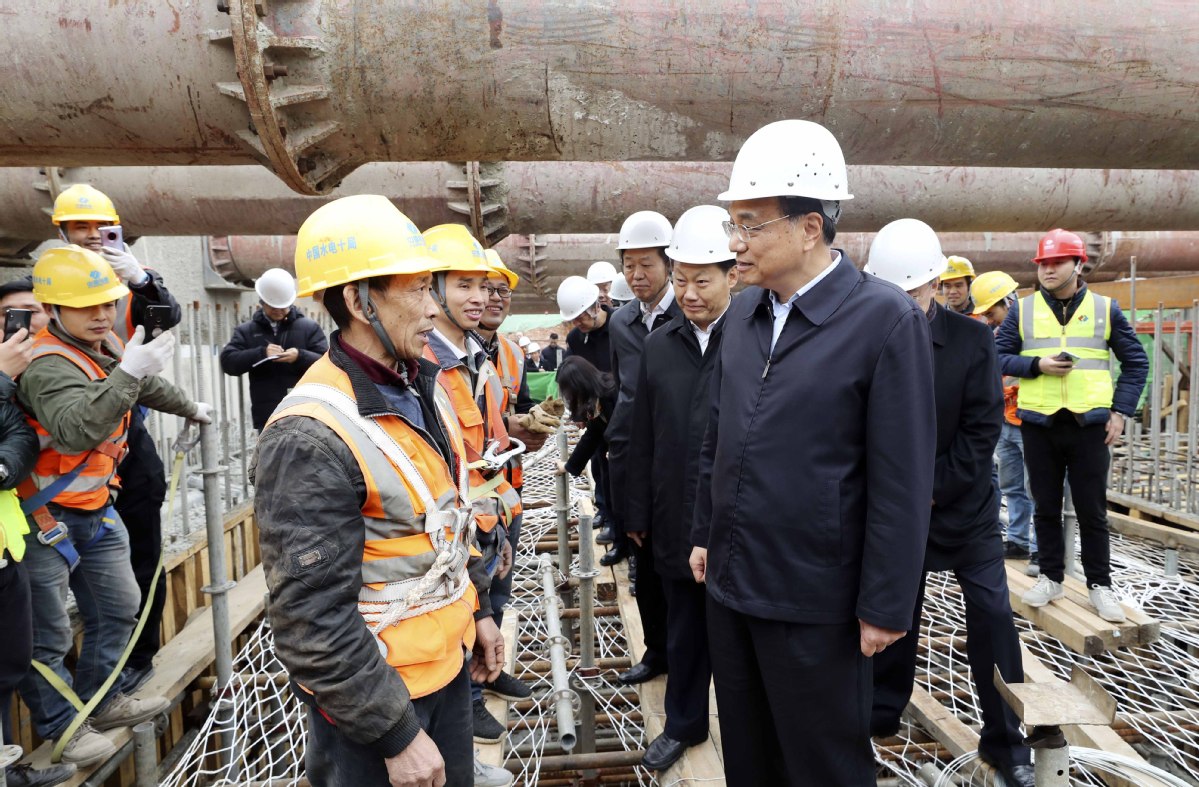 Premier Li Keqiang, visiting a construction site on Monday in Chengdu, Sichuan province, talks with migrant workers after climbing up a scaffold. He asked them about their monthly earnings and the length of their workday. He also asked whether their wages are paid on time and in full. YAO DAWEI/XINHUA

Premier on tour of Chengdu before hosting meeting of leaders of China, Japan and ROK

Li's remarks came as he made an inspection trip to Chengdu, Sichuan province, where he is hosting the eighth China-Japan-Republic of Korea leaders' meeting on Tuesday.

The country is further researching measures such as across-the-board reserve requirement ratio cuts or targeted cuts of RRR－the proportion of cash that banks have to set aside as reserves－to solve the difficulties and high costs of financing faced by small and micro businesses, he said during a visit to a branch of Chengdu Bank.

He pledged greater support to small and medium-sized banks, which offer direct services to small and micro businesses, saying that the sharing of information on businesses will be promoted to facilitate more loans.

He also voiced his hope that small and medium-sized banks will further boost lending to small and micro businesses, a key pillar for job creation.

The premier visited an online administrative service center and was briefed on the development of the free trade zone in the province as well as the Tianfu New Area.

The key is to further reform to streamline administration and bolster compliance oversight and services, he added.

He said the services offered by staff workers should be warm as the sunshine, and they should help develop the area to a new height in offering more accessible services to businesses and individuals.

Li underlined bettering the environment for starting businesses and making innovations as he visited a park for entrepreneurship and innovation.

The abundance of human resources and a rich supply of talent have been China's unique edge in development, and more measures must be adopted to stimulate market vitality and social creativity and to incentivize more people to start successful businesses, he said.

The premier also learned from some migrant workers at a construction site about their wages and living conditions.

Migrant workers should be given full credit for the country's development, and the government must ensure that their wages be paid in full and on time, he said.