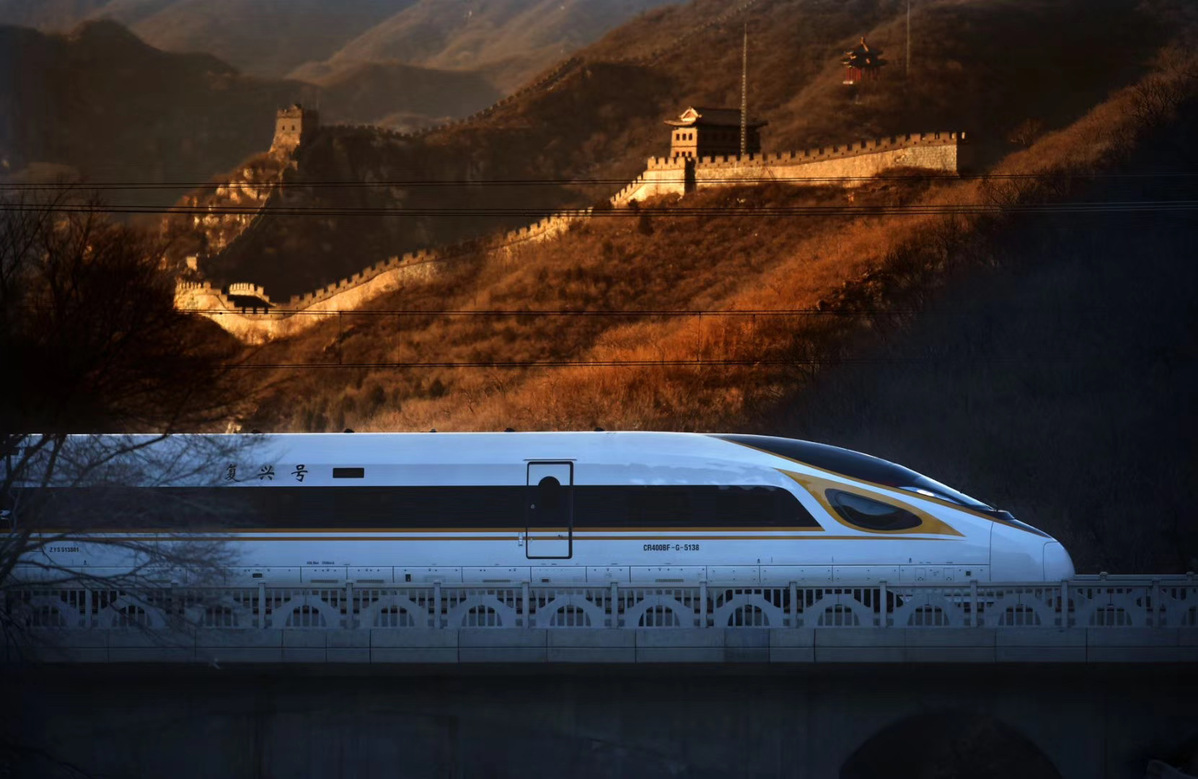 A high-speed train passes through the Juyongguan section of the Great Wall in Beijing on the Beijing-Zhangjiakou high-speed railway, which opened on Monday. [Photo by Lei Sheng/For China Daily]

President Xi Jinping stressed the significance of the high-speed railway line connecting Beijing and Zhangjiakou, the co-host city of the 2022 Winter Olympics. The line went into operation on Monday.

Xi, also general secretary of the Communist Party of China Central Committee, said that the Beijing-Zhangjiakou line has witnessed the development of China's railways over more than a century.

The current railway line, which came into service on Monday, is a world-leading high-speed railway with trains moving at 350 km/h.

He called the Beijing-Zhangjiakou high-speed railway an important supporting project for the 2022 Beijing Winter Olympics, adding that the opening marks new progress in the preparations for the Winter Olympics.

Xi called for the advance of related high-standard and high-quality work to ensure the Winter Olympics are held as scheduled.

He also expressed his warm congratulations and New Year's greetings to everyone involved in the project's planning and construction.

The 174-km Beijing-Zhangjiakou line, with a maximum designed speed of 350 km/h, reduces travel time between the two cities from over three hours to 47 minutes, making Hebei one of the few provinces with a high-speed rail system connecting all of its cities, said China State Railway Group.

The intercity railway makes use of big data and has smart technology built into many aspects, including passenger transportation, management, security, maintenance and scheduling, the company said.

Zhang Bo, a researcher at the Locomotive and Car Research Institute at the China Academy of Railway Sciences, said the train can automatically start, run between stations, adjust its timing according to the schedule, accurately stop at a station, and open and close its cars' doors.

"Supported by the Beidou Navigation Satellite System, sensors are installed along the railway so that real-time 'physical examinations' can be carried out to detect problems such as aging components, track subgrade settlement and damaged lights," he said.

Two railway lines opening on the same day－the 136-km line linking Zhangjiakou with Datong in Shanxi province and the 287-km line connecting Zhangjiakou with Hohhot, capital of the Inner Mongolia autonomous region－also link those cities with Beijing through the Beijing-Zhangjiakou railway. 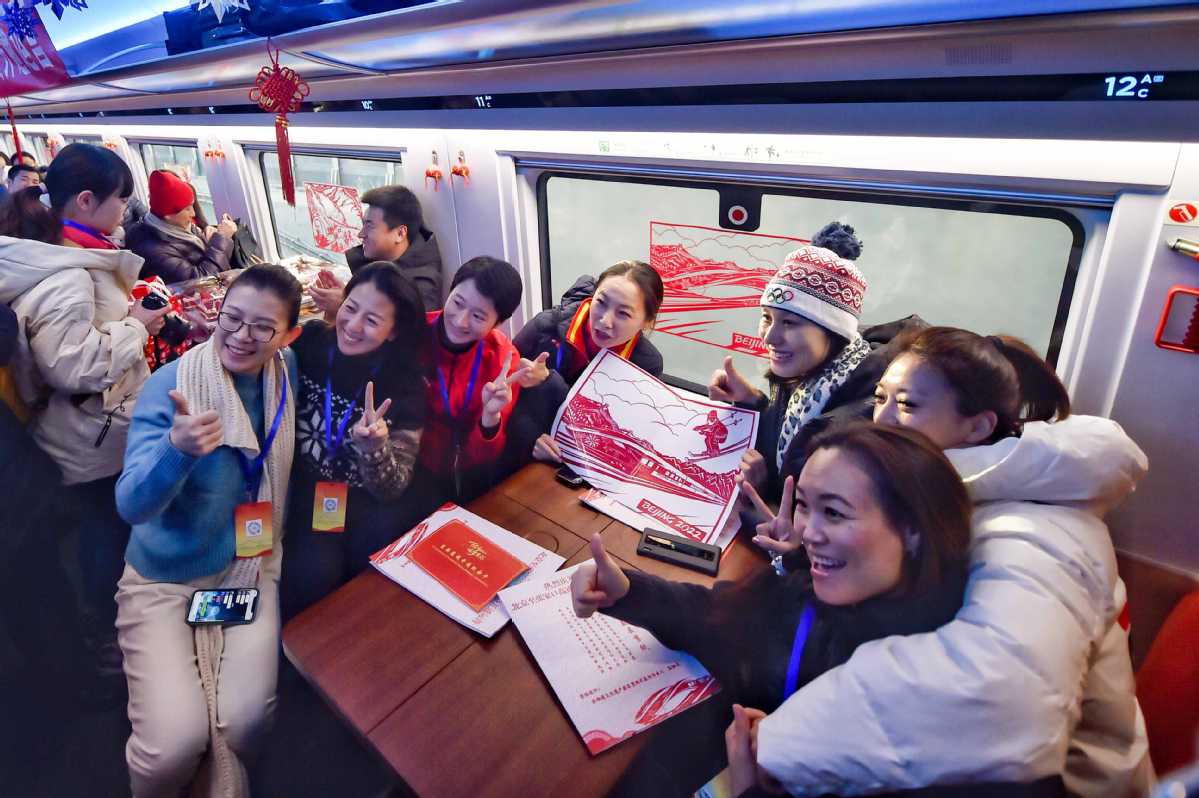 Passengers take a high-speed train from Beijing to Chongli district in Zhangjiakou, part of the Beijing-Zhangjiakou high-speed railway, which opened on Monday. The railway will support the 2022 Winter Olympics and winter tourism. [Photo/Xinhua]

Travel time between Hohhot and Beijing, a distance of 500 km, is expected to be shortened from nearly 10 hours to about two hours with the launch of the new service. People traveling from Datong will need about an hour and 42 minutes to get to the capital.

"I used to get on the train in the morning and arrive at my home in Hohhot late at night. It's frustrating to spend two days on the round trips. But with the operation of the line, I can even go back over weekends," said Guo Cun, 29, who works in a battery company in Beijing.

"The new rail lines will help these regions better connect with the country's high-speed railway network and thus greatly save the travel time for the local people along the railway," said Zhao Jian, an economics professor specializing in rail transportation at Beijing Jiaotong University.

The high-speed service will also strengthen the flow of labor and information between those cities and the Beijing-Tianjin-Hebei region and boost regional integration and coordinated economic growth, he added.

Xinhua contributed to this story. 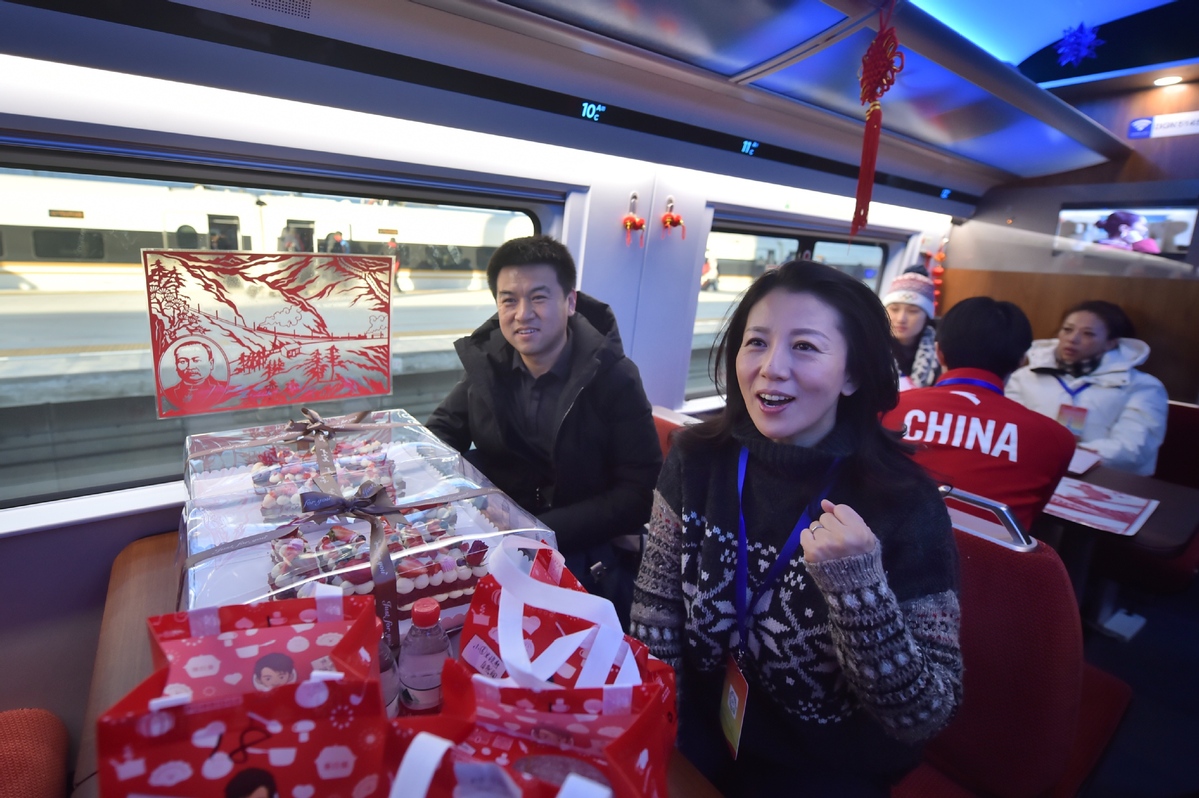 Yang Yang (right), a Winter Olympic champion and chairwoman of the Athletes' Commission of Beijing 2022 Winter Olympics, is among passengers on the high-speed train G8811, on Dec 30, 2019. [Photo/Xinhua] 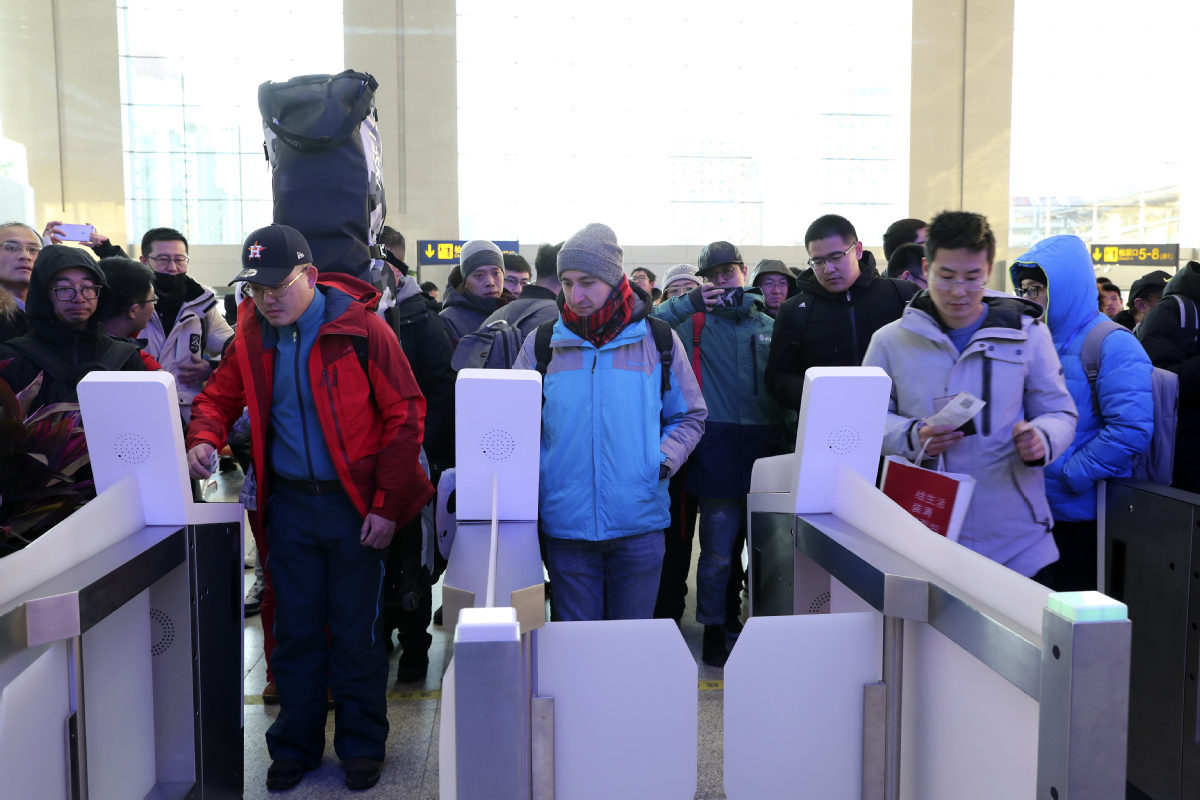 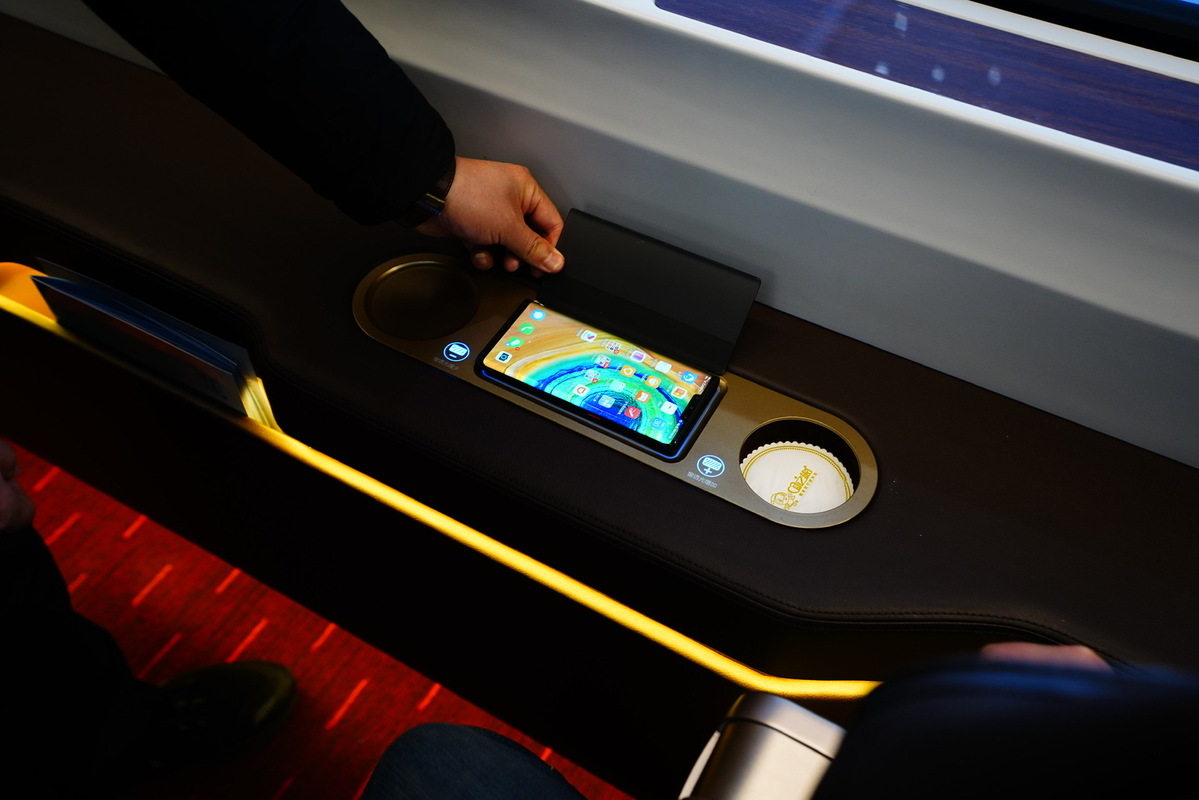 A passenger tries the wireless charging function on the train G8811, the first train to run on the newly opened Beijing-Zhangjiakou high-speed railway, on Dec 30, 2019. [Photo/Xinhua] 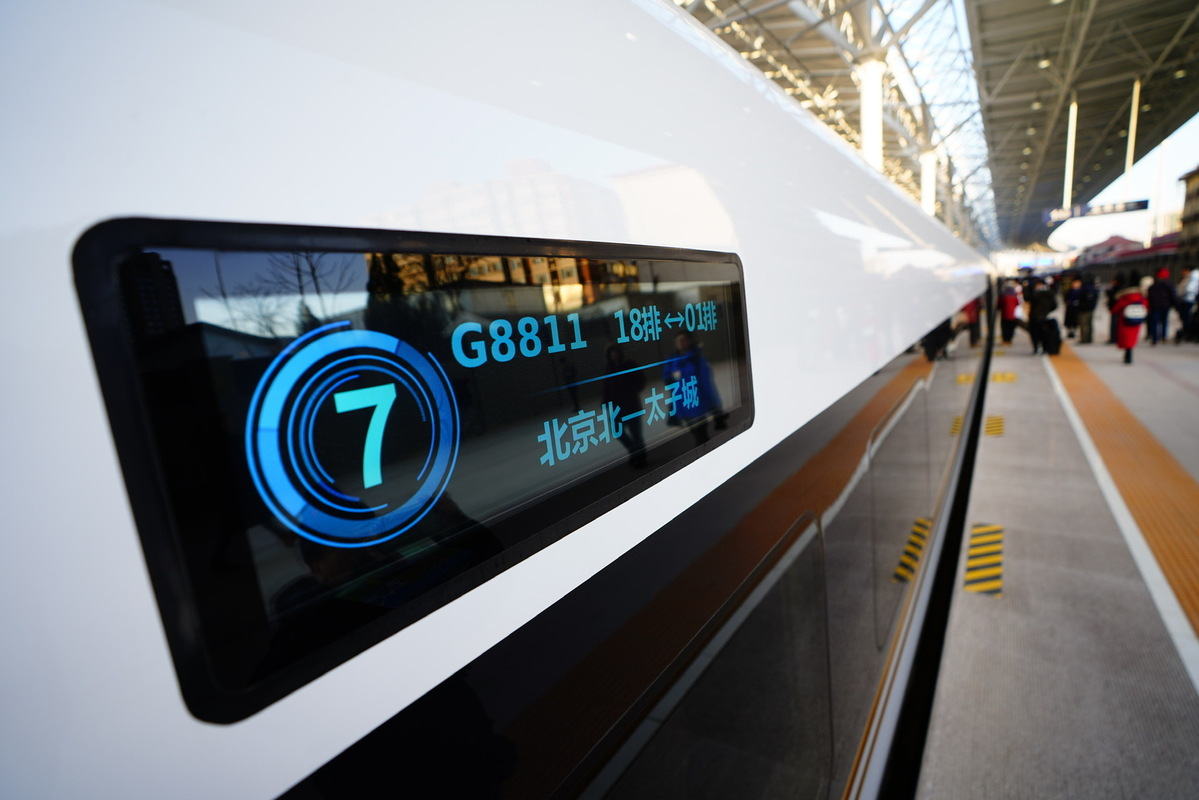 With 5G signals, wireless charging and intelligent lighting, the smart train G8811 is the first train to run on the newly opened Beijing-Zhangjiakou high-speed railway, on Dec 30, 2019. [Photo/Xinhua]