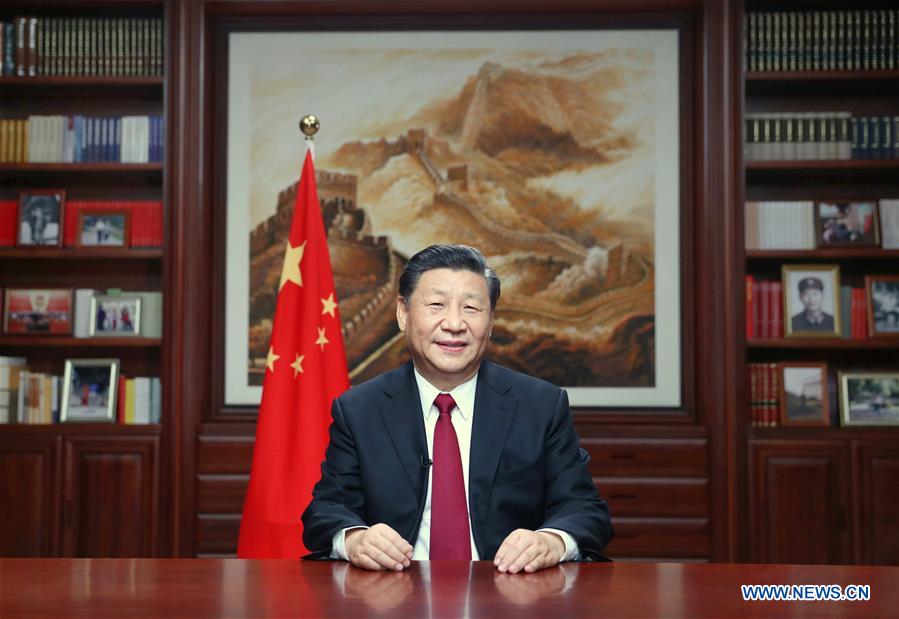 BEIJING, Dec. 31 (Xinhua) -- Chinese President Xi Jinping on Tuesday delivered a New Year speech in Beijing to ring in 2020, pledging to achieve the first centenary goal of building a moderately prosperous society in all respects in the "milestone" year.

Xi pledged to lift all rural residents living below the current poverty line out of poverty and eliminate poverty in all poor counties.

"The year of 2020 is crucial in winning the anti-poverty battle," Xi said. "The clarion has sounded. We must work together and work hard... to secure a victory in the battle against poverty."

"The situation in Hong Kong has been everybody's concern over the past few months," said Xi.

"Without a harmonious and stable environment, how can there be a home where people can live and work happily!" Xi said. "We sincerely hope for the best for Hong Kong and Hong Kong compatriots."

A prosperous and stable Hong Kong is the aspiration of Hong Kong compatriots, as well as the expectation of the people of the motherland, he said.

Noting that there are both peaceful and eventful times in history, Xi said that "we are not afraid of winds and rains, or any kind of difficulties."

"In 2019, we sweated and we toiled as we pressed ahead with concrete efforts for achievements," Xi said in his speech, summarizing the progress made in 2019.

Key progress has been made in efforts to forestall and defuse major risks, carry out targeted poverty alleviation, and prevent and control pollution.

Around 340 poor counties across China will get rid of poverty and more than 10 million people will be lifted out of poverty by the end of 2019, Xi said.

He highlighted advances in science and technology. Chang'e-4 probe made a historic landing on the moon's far side; the Long March-5 Y3 carrier rocket was successfully launched; polar icebreaker Xuelong 2 set sail on its maiden voyage to the Antarctic.

A new batch of pilot free trade zones were established, the Shanghai Pilot Free Trade Zone was expanded, the science and technology innovation board was launched smoothly, and over 2 trillion yuan of taxes and fees have been cut over the year.

"The most memorable moment of 2019 was the celebrations for the 70th anniversary of the founding of the People's Republic of China," said Xi, adding that the sheer force of patriotism was felt by the people.

Xi said over the year he traced the routes of China's revolution. "Our original aspiration and mission are our inexhaustible source of motivation during our Long March of the new era."

"As usual, no matter how busy I was, I spent time visiting people in the countryside," Xi went on to recollect his interaction with the people during the year.

Xi mentioned the names of individuals among many ordinary people who, he said, "touched us deeply" over the past year.

Xi highlighted a series of events China hosted over the year including the second Belt and Road Forum for International Cooperation, the Beijing International Horticultural Exhibition, the Conference on Dialogue of Asian Civilizations and the second China International Import Expo.

Xi said he met with leaders of many countries over the year, sharing with them China's proposals, promoting friendships and enhancing consensus.

The number of countries China has established diplomatic relations with has reached 180, according to Xi.

"We have friends in every corner of the world," he said.

Wrapping up his speech, Xi said "let's seize the day and live it to the full and greet the arrival of the year 2020 together."