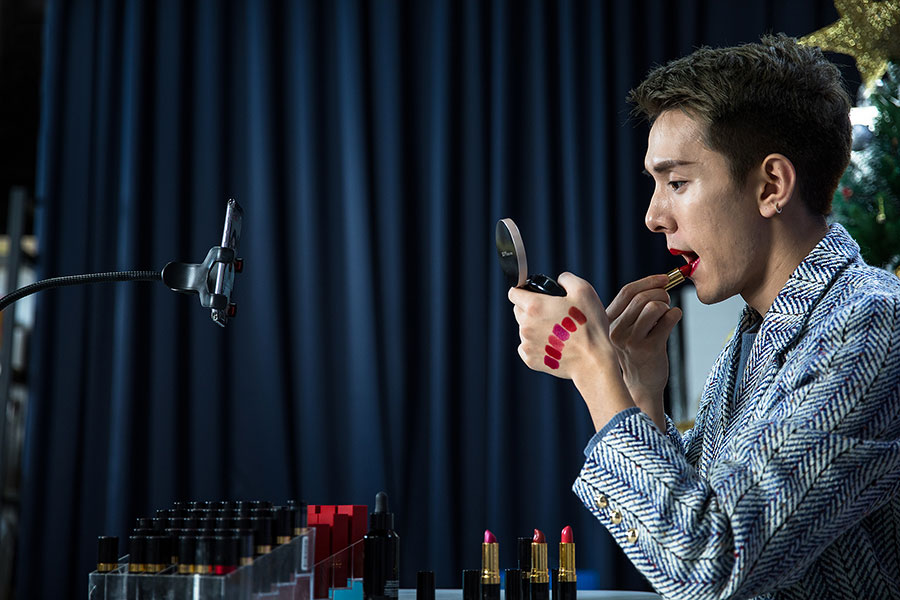 Li Jiaqi, a Chinese blogger, who endorses beauty products through livestreaming, applies lipstick during a live broadcast on the Taobao platform in Shanghai. [Photo by Niu Jing/For China Daily]

The report, based on a survey of more than 8,000 users and more than 5,000 livestreaming hosts in December, was published recently by social media platform Momo.

Nearly 80 percent of users are willing to buy virtual gifts for the hosts while watching the livestreaming shows, the report said.

The report also found that most hosts are confident about their career prospects, with 83.3 percent of hosts saying that they will stay as hosts for the coming two years.

Many hosts were found to have made large investments in improving their skills－such as singing and dancing－and upgrading their broadcasting equipment. About 70 percent of full-time hosts spend over 1,000 yuan per month on self-improvement, the survey shows.

The mobile internet population surpassed 847 million in China and the country had 433 million livestreaming users as of June, according to China Internet Network Information Center.

According to a report released by Taobao in April, over 100 billion yuan worth of goods were sold with the help of livestreaming in 2018, up 400 percent year-on-year. There are on average over 60,000 daily livestreaming sessions and 180 percent more broadcasters registered on the platform compared with 2017.

A 10-minute broadcast featuring Li Jiaqi, dubbed Taobao's king of lipstick, on Taobao's livestreaming platform now costs 100,000 yuan for lipstick products, 60,000 yuan for other cosmetics or personal care products and 30,000 for food, according to Caixin.

Li, a 27-year-old from Hunan province, gained fame on Chinese social media in late 2017 after he managed to try 380 lipsticks in a two-hour livestream show.

Li impressed netizens again by beating Jack Ma, founder of Alibaba Group, in a livestreamed lipstick sell-off on 2018 Singles' Day by selling 1,000 lipsticks, while the latter sold only 10 during the same period.

Cao Ting, who eats on livestreams in Changsha, Hunan province, said she started as an online eating host in 2018 as she has lots of free time as a stay-at-home mother.

"I have three ways of making money: by advertising for food companies; through fan payments; and by promoting slimming products through my WeChat business."

She said she makes enough to support herself and she will continue her eating career because it provides a stable income.