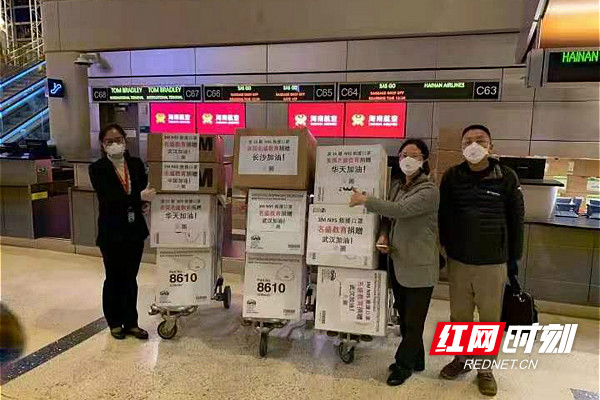 Over the past few days, the outbreak of pneumonia caused by the new coronavirus and the safety of our compatriots have been of great concern.

The crowd gathered torespond the proposal.

At 1 o 'clock on January 28, Ms. Liao Liping of Hunan Overseas Chinese Chamber of commerce arrived in Changsha with ten boxes of masks and donated them to Hunan provincial health commission as soon as possible.

On the morning of February 1, 33,000 masks, donated by Chinese in Los Angeles, were delivered to Changsha by Gao Zhu, deputy general manager of Huatian international Travel Agency.

Through friends and relatives in the United States, Gao asked the local Chinese community for assistance in purchasing surgical masks in bulk. The vast majority of Chinese were also worried about the outbreak in their home country, so they gave generously and eventually turned the purchase into a donation. The first batch of 33,000 masks donated by a local educational institution was quickly delivered within days, including 3,000 urgently needed N95 protective masks for medical staff.

At 6:10 p.m. on February 1, 2,700 boxes of 16,200 pieces of medical protective clothing arrived at Changsha by Hainan Air. Entrusted by the provincial government and assisted by the American overseas Chinese community, Hunan FOC completed the procurement of medical supplies. All protective suits will be deployed by the provincial government and distributed to the frontline of major hospitals as soon as possible.

Everyone is doing his best for his hometown. Liu Chang, President of Hunan association of Washington state, introduced that after receiving the purchase demand, the association confirmed the supply of goods in the early morning of January 28 and packed it on the plane on January 31. In just four days, more than 100 Hunaness in the US worked together to complete the purchase task successfully. At the Los Angeles Airport, Ms Liang Zeng Xiao-mei, President of the Southern California Hunan Fellow Association, led 40 to 50 volunteers waiting from 8 a.m. to 11 p.m. to make sure all the cargo catch the flight.