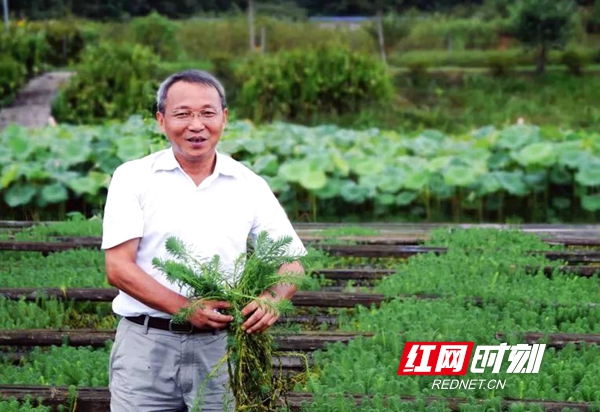 In Jinjing town, Changsha county, Hunan province, fish and shrimp swim in clear water, green fir forest and tea forest stand far away. It is hard to imagine that there was once suffered serious pollution Ccaused by pig breeding. This shift is the result of the establishment in 2008 of the Changsha agricultural environment observation and research station of the Chinese academy of sciences, led by Wu Jinshui.

Wu Jinshui is a deputy to the National People's Congress, director of the institute of subtropical agriculture of the Chinese academy of sciences, doctoral supervisor, vice chairman of hunan overseas Chinese federation, vice chairman of China soil society, chairman of hunan soil and fertilizer society, winner of the national outstanding youth fund, and candidate of the first and second level talents of the national "tens of millions of talents project".

More than 20 years ago, Wu Jinshui gave up the superior conditions abroad and resolutely returned to China. Over the years, he has led his team to carry out a lot of research work in the field of soil ecology and agricultural environment, and made a number of major breakthroughs in the fields of carbon sequestration and emission reduction in subtropical farmland and environmental governance in river basins. He has obtained 32 invention patents, formulated 2 national standards, and listed many achievements in the national list of new environmental protection technologies.

Wu Jinshui was born in the village of Wuxue in Hubei province. Hybrid rice was bred in his hometown in 1975, which amused the boy who grew corn and pumpkin and loved chemistry. After the national college entrance examination was resumed, he was admitted to Huazhong Agricultural University, majoring in soil and agricultural chemistry. Informed that the villagers worried that he would return to the countryside after graduation. Wu said "atechnician is also a pretty good job." In his view at that time, the agricultural world is vast, more importantly, the farmers can solve the problem of food for the villagers.

After graduating with a PhD from the Lausanne Lab, Wu went to the University of Newcastle in the UK to continue his academic career, focusing on scientific research. He kept reading the overseas edition of the People's Daily everyday to understand the development of his country. In 1998, sensing change and opportunity, Wu returned to the institute of subtropical agriculture of the Chinese academy of sciences in Changsha. In 1999, he was appointed as a researcher of knowledge innovation by the institute of soil and water conservation, ministry of water resources, Chinese academy of sciences.

When he arrived, he found that eequipment was out of date. What can be done in one day abroad took ten days at home. With the state's support for science and technology gradually strengthened, Wu proposed the intelligent reform of instruments and equipment in the institute, gritted his teeth and gradually introduced new technologies to promote the level of scientific research.

As a deputy to the National People's Congress (NPC) and President of hunan non-party intellectuals association, Wu Jinshui, who is taking academy as his only responsibility, has made suggestions for national and local development. In addition, he has trained more than one hundred masters, doctoral students and postdoctoral professionals for the country in recent years.

After years of field research and exploration, the aquaculture waste treatment and recycling technology system developed by Wu's team and the nitrogen and phosphorus ecological interception technology system of catchment runoff system have been applied and promoted in many provinces and cities in south China. Nowadays, Changsha county has also become one of the country's model counties for modern agriculture and ecological livability.