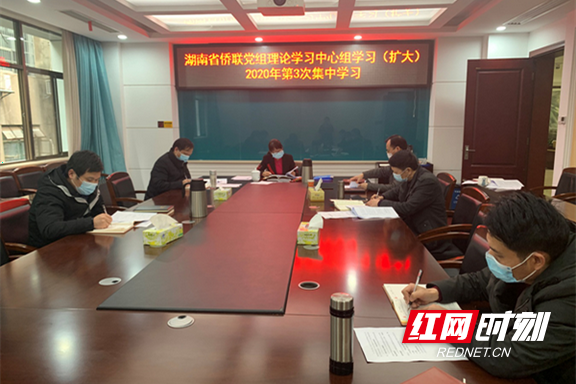 On March 13, Huang Fang, secretary of the party group of Hunan FOC presided over the theoretical learning center group of the CPC leading group of fujian overseas Chinese federation.

The meeting learned from general secretary Xi Jinping's important speech at the meeting on the decisive battle against poverty on March 6, general secretary Xi Jinping's speech at the fourth plenary session of the 19th central commission for discipline inspection and comrade Chen Xi's speech at the national organization ministers' meeting. It conveyed the spirit of the report of the political bureau of the CPC central committee on the implementation of the eight provisions of the CPC central committee in 2019, the report on the work of reducing the burden on the grassroots by solving the prominent problems of formalism, and the key tasks of the leading group for party building in the provincial party committee in 2020.

Li Zuyuan, member of the leading party member and vice president of the provincial FOC pointed out that we should earnestly study the important speech spirit of general secretary Xi Jinping, make solid progress in the project of "thousands of overseas Chinese helping thousands of families", and do a good job in poverty alleviation in Chitan village. We need to pool the resources of all parties and make greater contribution to the decisive battle against poverty.

Huang Fang pointed out that in the crucial stage of epidemic prevention and control and the decisive moment of poverty alleviation, general secretary Xi Jinping's speech at the meeting of the decisive battle against poverty is the action guide and fundamental follow for us to win the final battle against poverty. Hunan FOC should further study and grasp the spirit of general secretary Xi Jinping's important speech, further enhance the "four consciences", strengthen the "four self-confidence", and achieve the "two safeguard", not forget the original intention, remember the mission, solid work, overcome the impact of the new champion pneumonia epidemic, and resolutely win the battle against poverty.

Huang Fang required that the members of the central group should strengthen their self-consciousness of learning, and insist on transforming their thoughts into actions, so as to apply what they learned and improve the learning effect. In strict accordance with the requirements of the central and provincial party committees for the prevention and control of the epidemic, we should do a good job in the follow-up to overseas donations, the resumption of work and production by overseas Chinese enterprises, and the response to the overseas epidemic. We will continue to do a good job in poverty alleviation work in rural areas, and further leverage the power of the overseas Chinese community to help alleviate poverty. The two reports of the central committee and the spirit of the national organization of ministerial meetings should be fully complied with, the spirit of the central committee's eight-point provisions should be fully implemented, young cadres should be cared for, and cadres should be encouraged to take on their responsibilities.

At the meeting, members of the central group discussed and communicated about the learning content.