More statements about the "resale of anti-epidemic materials" issued 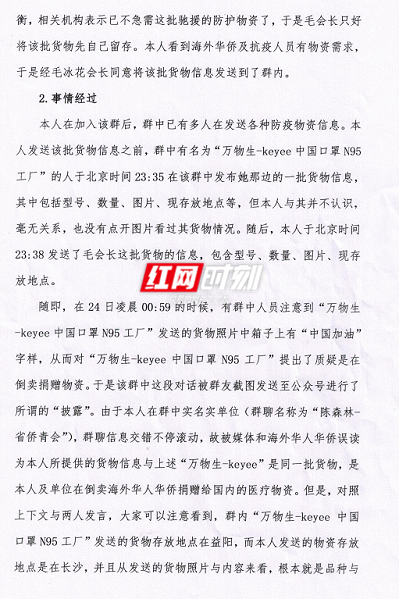 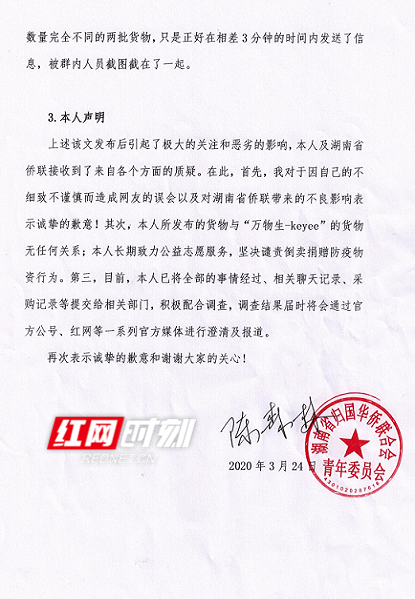 As public paid much attention to the post about the resale of dondonated epidemic prevention materials, Hunan FOC issued a statement on March 24. On March 25 , Chen Senlin, executive director of the youth committee of Hunan FOC(hereinafter referred to as "youth commitee"), issued a personal statement, which described the process of the incident, and took it a bona fide mismatches caused by the sincerely concern. He also thanked the poster for promptly clarification.

"As the executive chairman of the youth committee, after my initial completion of the voluntary work of epidemic prevention in China, I began to actively participate in the voluntary work of epidemic prevention services to support overseas Chinese. On March 20, I joined a WeChat group, which aimed helping hospitals inthe US. My job is provideing consulting different standards in epidemic prevention material between China and the US, matching goods and transportation information, to support the overseas Chinese in epidemic prevention." Chen said that at 23:38 Beijing time on March 23, Chen posted the information and photos of the protective clothing donated by MAO Binghua, president of the youth committee. The cargos were firstly purchased from the US and returned to China.

Chen introduced that this batch of goods were purchased by Mao BInghua under the very severe situation of the epidemic in China, in order to help the domestic agencies in need. She personally funded procurement in the United States. Previously, she has organized many batches of supplies, which had already arrived and been donated.

The goods due to various reasons such as poor transportation, customs formalities took more than 20 days to arrive, while domestic production of materials for the epidemic prevention has quick recoverred, especially in Hunan, where the medical supplies soon matched the demand. The agency felt no longer need the materials urgently, "the chairman MAO have to be retained the goods first. And I saw that overseas Chinese and anti-epidemic personnel need protection materials urgently." Later, the chairman Mao agreed to send the batch of goods information to the WeChat group.

Chen said that after joining the WeChat group, a number of people in the group are sending information on various epidemic prevention materials. A group member known as the "all - keyee China masks N95 factory" released a batch of goods, including the type, quantity, pictures, existing sites. But Chen Senlin did not noticed. "then, I sent the information, about this batch of goods, which contains the type, quantity, pictures, existing location."

Then, at 00:59 on March 24, a group of people noticed that the boxes of the goods sent by "keyee China mask N95 factory" had the words "go China" on them, so they questioned "keyee China mask N95 factory" and thought it was reselling donated supplies. So this conversation in the group was sent to the poster by the group friends screenshots for "disclosure". Chen said, because he was in the group with the real-name solid unit (personal name in the group chat as "Chen Senlin youth commit. Hunan FOC"), a group chat message cross rolled over, misreading for him because the media and overseas Chinese goods provided by the information and the "all - keyee" is with a batch of goods, mistaken him reselling donation to overseas Chinese community.

"Compare context, you can see, in the same group all - mask N95 keyee China factory 's goods location in Yiyang, and my goods location was in Changsha. And from the point of pictures and content, they were completely different two batches of goods, the quantity and variety is just in vary within three minutes of time to send information, by personnel in the group of capture together." Chen said.

Chen thought that the question after the post has attracted public attention, and caused the widespread impact. He himself "due to carelessness" caused misunderstanding. And he stressed that he hoheld no relationship with "all - keyee" as well as the goods. "for now, I have all things pass by, related chat records, procurement records submitted to the relevant department." 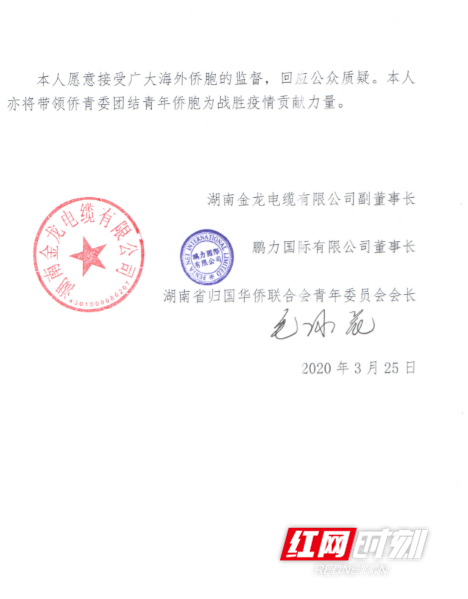 A statement from Mao Binghua

On the evening of March 25, a statement was issued by Mao Binghua, another person involved in "the resale of donation". Mao is vice chairman of Hunan Jinlong cable, chairman of Pengli Internationa, and chairman of the youth committee of Hunan FOC. In a statement, Ms. MAO said she was willing to accept the supervision of overseas Chinese and respond to public questions about online questions about her entrusting Mr. Chen to resell a batch of epidemic prevention materials. She said that the goods in the post had nothing to do with the supplies she had purchased.

"At the beginning of February, there was a shortage of protective materials in Hunan, so provincial business associations and enterprises wanted to purchase materials for donation to relevant cities and states. I and Chang Qi, former President of UAE Hunan chamber of commerce, have made great efforts to purchase more than 27,000 sets of protective clothing, of which more than 11,000 sets are my cushion." MAO explained that due to the epidemic, she and Chang Qi and other organizations and personnel have donated more than 5,000 pieces. There are still 22,000 pieces in the Changsha warehouse. On March 20, Mao entrusted Chen Lin, to help "transfer the inventory of goods and materials to more needy units and individuals after the customs duties are paid".

"Since the outbreak of the epidemic, I, as the President of the youth committee, have been leading all the members of the committee to actively assist relevant departments in the global procurement of protective materials and assist in the clearance and transfer of materials." Mao introduced that from January 28, the first batch of donations arrived in Hunan, to March 10, a total donation of 544,320 million yuan, medical supplies of 1,455,600 yuan, "all donated materials have been transferred in accordance with the law in accordance with the procedures."