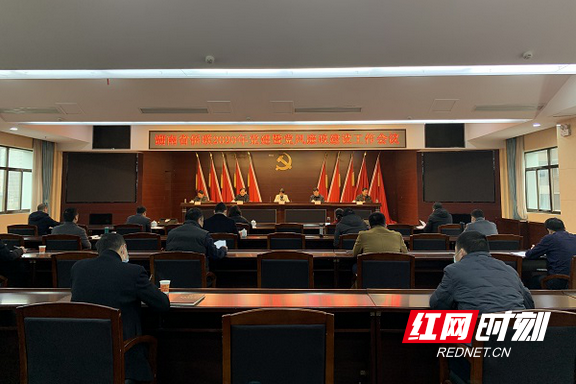 At the meeting, Sun minsheng, member of the leading party member and vice chairman of Hunan FOC, conveyed the spirit of the 4th meeting of the 19th CPC central commission for discipline inspection, the 5th plenary session of the 11th CPC central commission for discipline inspection of hunan province and the spirit of the working conference of the provincial party. Li zuyuan, member of the leading party members' group and vice chairman of Hunan FOC delivered a report on party building and clean government building. According to the report, in 2019, the provincial federation of overseas Chinese fully implemented the requirements of strict party governance, carried out education under the theme of "not forgetting the original intention and keeping the mission firmly in mind", conscientiously carried out inspection and rectification work, closely combined with the actual situation of the federation of overseas Chinese, comprehensively strengthened the construction of the party and party conduct and integrity, centering on the overall situation, and promoted the development of the cause of the federation of overseas Chinese. This year, the provincial federation of overseas Chinese will study and implement Xi Jinping thought on socialism with Chinese characteristics for a new era, comprehensively strengthen the building of political organizations, improve the scientific level of party building, build a clean and upright political organ, strengthen the building of spiritual civilization and the work of mass organizations, and comprehensively promote the building of the party and the conduct and integrity of the party.

Cai Guoqiang, deputy head of the discipline inspection and supervision group of the united front work department of the CPC provincial commission for discipline inspection and supervision in the province, analyzed the current situation of the construction of clean government and the fight against corruption in combination with some cases. He pointed out that we should firmly shoulder the political responsibility of comprehensively governing the party with strict discipline and promote its in-depth development. To prevent the "four winds" rebound back to the tide, vigorously advocate the wind of pragmatic; We will continue to foster a sound political environment, strictly observe political discipline, ensure that people are properly selected and appointed, strengthen the political culture within the party, and strengthen discipline and institutional enforcement.