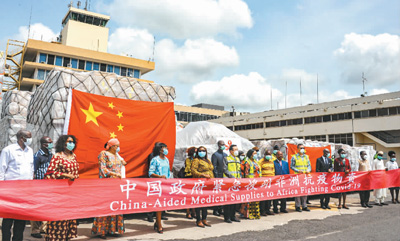 On April 14, anti-epidemic supplies from China arrived at Johannesburg, South Africa. South African government officials expressed high appreciation and heartfelt thanks to the Chinese government and people for their valuable support and assistance at the critical moment of fighting the epidemic in South Africa. 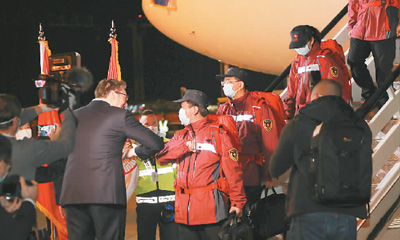 Serbian President Vucic meets with members of the Chinese medical team to help Serbia fight the epidemic in Belgrade, capital of Serbia, March 21. 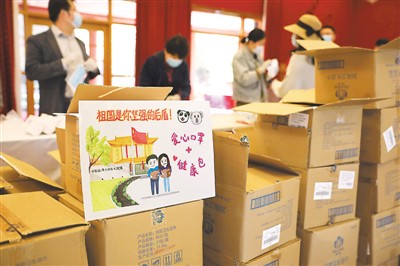 On April 15, the staff of the Chinese embassy in Canberra, Australia, loaded the anti-epidemic materials into the "health kit" to send to the students. As the epidemic spreads, more than 280 Chinese embassies and consulates have made it a top priority to help overseas students.

In the spring of 2020, covid-19 outbreaks occurred in multiple locations around the world. In the face of the global public health security crisis, China has taken the initiative and extended mutual help to instill confidence in the global war epidemic and write a new chapter for international cooperation. Since the outbreak of the epidemic, President Xi jJnping has paid close attention to the development of the epidemic at home and abroad, personally directed the deployment of domestic epidemic prevention and control work, coordinated the domestic and international situations, and made great contributions to the global prevention and control of the epidemic.

Overseas Chinese across the five continents deeply felt the regards. Recently, in an interview with our reporter, a number of overseas Chinese nationals, henceforth, President Xi Jinping, with love to people as well as to the world, reflects that China attaches great importance to people's life safety and health of humanistic thought. It shows that China firmly maintains the global public health security and the development of the world economy.

"The Chinese government has adjusted its prevention and control measures according to the different stages of the outbreak, but the safety of human life is the top priority at all stages." Jiang feng, chief editor of the Japan Xinhua overseas Chinese news, said that in the critical moment of the outbreak, China's top leaders showed determination and charisma, while the Chinese government showed efficient governance.

People are above everything else and life is heavier than Mount Tai.

"I will not be myself, not the people." In March 2019, in the Italian chamber of deputies, President Xi Jinping answered a question from Italian speaker of the chamber of deputies, which impressed Chen Ming, the president of sino-italian youth association. He said that President Xi has always been in close touch with the people who are struggling with the epidemic, showing a strong sense of responsibility for their lives and leadership.

After the outbreak broke out in many countries and many places, President Xi stressed on many occasions that the Chinese government attaches great importance to protecting the health and safety of Chinese citizens overseas.

"In his phone call with US President Trump, President Xi Jinping specifically mentioned the great importance attached to Chinese citizens and students in the us and asked the US side to take effective measures to ensure their safety and health." China council for the promotion of peaceful reunification in New York, USA President Ma Yue said that since the overseas outbreak of COVID - 19, the Chinese government in the first time took many measures to protect the overseas Chinese, effectively providing a variety of security and convenience services, which reflects the ability and determination to defend the rights of Chinese citizens abroad!

"We need to speed up the restoration of production and living order in the course of regular epidemic prevention and control, promptly resolve the difficulties and problems faced by the resumption of work and production, and strive to minimize the losses caused by the epidemic," President Xi said

Chen Ren, President of the sino-australia federation of young entrepreneurs, said the outbreak would inevitably have a big impact on the global economy and the Chinese economy. On the premise of preventing and controlling the epidemic, President Xi Jinping has put forward eight requirements on the orderly resumption of work and production. This is not only the reality that China, as the world's second largest economy, must face, but also China's responsibility for world economic development. The long-term upward trend of the Chinese economy will not change. We have full confidence in the effective leadership of the CPC and the greater development of the country.

According to Wu Binjiang, President Xi stressed that "we should not adopt a 'one-size-fits-all' approach to different regions to hinder the restoration of economic and social order, and we should not improperly relax prevention and control so that all previous achievements are lost." This directive points out the direction for the overall control of the epidemic and economic and social development.

Under the leadership and deployment of President Xi, China has taken public health measures suitable for different situations in different regions to strictly prevent and control diseases, said wang wenjie, President of the Brazilian federation of honmen. Now, the epidemic in China is under control and all industries are returning to work and production in an orderly manner. This demonstrates China's speed, strength and efficiency, demonstrates the outstanding leadership of Chinese leaders and government in responding to major crises and managing complex situations, and demonstrates the superiority of the socialist system with Chinese characteristics.

"We will strengthen international cooperation in an all-round way, pool strong synergy to defeat the epidemic and join hands to win the battle against major infectious diseases." President Xi said.

"At the moment of the global outbreak of the epidemic, President Xi has personally promoted China's cooperation with other countries in the field of war and epidemic diseases in a practical and diverse manner: through telephone conversations and letters; There are bilateral dialogues and multilateral meetings; Both for foreign dignitaries and for foreign friendly people..." Wang said that the Chinese government has worked with other governments to safeguard global and regional health security, and worked with the people of the world to tide over the crisis.

Wu said that after the outbreak of the epidemic, President Xi introduced in detail China's measures and practices in response to the COVID 19 outbreak to the political leaders of many countries, heads of international organizations and global celebrities through meetings, talks, communications and telephone calls. After the outbreak broke out in many parts of the world, China extended a helping hand at the critical moment and actively provided medical and protective materials to other countries, bringing a ray of hope to the world in fighting the epidemic.

"Not long ago, President Xi said on the phone with US President Trump at his request that he would continue to share information and experience on fighting the epidemic with the US and provide support within his capacity." After the outbreak in the United States, some local governments and enterprises donated a large amount of urgently needed medical supplies to the United States with the active support and coordination of the Chinese government, said ma. These donations provide immediate assistance to the medical institutions in the United States. At the same time, China shares its valuable experience of epidemic prevention and control with the US without any reservation.

"The international community must foster a sense of a community with a Shared future for mankind, support each other, work together to meet risks and challenges and build a better planet," President Xi said.

When the world joined hands in the fight against epidemic, President Xi called for building a community with a Shared future for mankind resonated with overseas Chinese.

"After the test of this outbreak, the whole world will have a clearer and deeper understanding of the vision of a community with a Shared future for mankind." "After the outbreak started in Italy, we worked actively with the local community to jointly prevent and control the epidemic in Italy in the simple idea of 'mutual understanding between our people'," Chen said.

Chen said that President Xi's vision of building a community with a Shared future for mankind conforms to the historical law of human society. In today's highly integrated global economy, countries in the world have long been interconnected. Covid-19 is not just an uphill battle in one country, but a global war of resistance. To succeed in this great challenge for mankind, the world needs to uphold the vision of a community with a Shared future for mankind and work together in an open and cooperative manner.

According to ma, as President Xi jJnping has said, "epidemics are the common enemies of mankind, regardless of national boundaries or race. The international community can only win the war by responding together." People of all countries share weal and woe and their well-being is interdependent. Only by working together and facing challenges together can we overcome difficulties, solve problems, move forward the cause of common concern and make the world a better place. So-called "decoupling" between countries is impossible and should not happen.