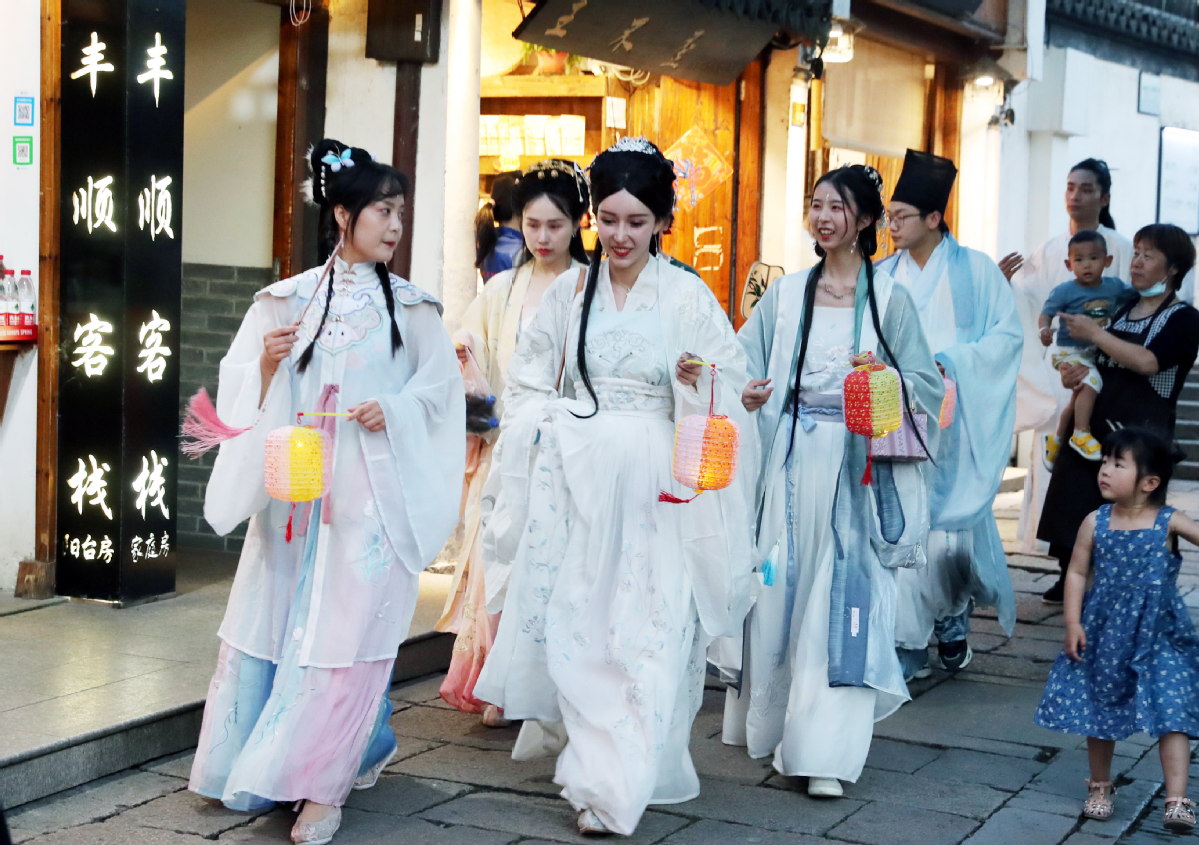 Tourists wearing traditional Chinese costumes walk in the street in Zhouzhuang town, an ancient town in Suzhou, Jiangsu province, on May 19. [Photo/HUA XUEGEN FOR CHINA DAILY]

Endless theme park queues and sold-out ticket booths never looked better as China's "cooped-up" consumers are stepping out again after the COVID-19 outbreak has been largely brought under control domestically.

Hotel bookings have returned to about 50 percent of normal levels, while airlines have generally resumed operations at more than half of their capacity, based on information from industry leaders.

According to the Government Work Report unveiled on May 22 during this year's two sessions, China will extend the exemption of value-added taxes for the tourism industry until the end of the year, and will support the recovery and development of tourism as part of efforts to shore up consumption.

A daily average of 23 million people traveled in the five-day May Day holiday, the first major national holiday since the COVID-19 outbreak, down by about half from the same period in 2019, according to the Ministry of Culture and Tourism.

Despite the year-on-year drop, it's a great improvement from February and March, when China was largely locked down due to the contagion. Even a few weeks ago, a three-day weekend in early April saw only around 14 million daily domestic travelers.

People flocked to famous scenic areas in the extended May Day break, which ran from May 1 to May 5. Beijing's Forbidden City sold out all 25,000 tickets before the holiday even started, while scenic Taishan Mountain in Shandong province saw massive overnight queues at its entrance ahead of its May 1 opening.

It's worth noting that tourism demand has been partially curbed by tough crowd-gathering control measures to reduce infection risks. The ministry ordered scenic park operators to cap visitor numbers at 30 percent of their capacity during the May Day holiday.

A gradual recovery in domestic tourism could offer a dose of encouragement to other countries looking ahead to life after lockdowns, including the release of pent-up demand among consumers. For many people, travel is a way to vent their stress and frustration from lockdowns.

Yet the rebound could be tentative with risks lingering. More data are needed to know when a full recovery might blossom.

For instance, China's commercial carriers are staging a rebound while many airlines around the world remain effectively grounded. Financially, they fare much better than many foreign commercial carriers. Large Chinese airlines show relatively strong balance sheets without any immediate liquidity problems.

Despite the improvement, challenges remain for Chinese airlines. International flights have almost completely collapsed, while domestically, business travel remains sluggish. Forward bookings indicate that a recovery in demand will be gradual, with low visibility beyond the very near term.

The epidemic plunged hotel occupancy rates to single digits in February, but the numbers have since bounced back to around 50 percent, based on our checks with operators and industry experts.

Midmarket hotels are faring better than both high-end and low-end properties. A lack of business or international travelers has curbed demand for luxury hotels; Chinese consumers could also be tightening their budgets.

A woman does Yoga in a pavilion near Huanghelou, a historical building in Wuhan, Hubei province, on April 4. [Photo/LI ZIYUN FOR CHINA DAILY]

Price cuts have become the order of the day, with some five-star properties in Shanghai offering 50 percent discounts. The cheapest hotels, on the other hand, have struggled due to popular impressions that they could place less focus on cleanliness.

So far, Chinese travelers are still showing a cautious preference for short-distance trips. Many prefer driving for a few hours to a nearby town for weekends, where they may stay for a night－and spend much less than if they go further away and travel by rail or air.

All this indicates that people feel relieved now that the worst of the novel coronavirus epidemic is over and they are mulling travel once again. But it's unrealistic to expect any V-shape rebound.

We may initially see a gradual recovery in domestic tourism, followed by short-haul regional travel where the epidemic is well contained. Visibility is low for the normalization of long-haul international travel.

There may be a shift in demand from outbound travel to domestic trips, as Hong Kong and Macao stay largely closed to mainland visitors, and overseas tours remain unpractical, given numerous lockdowns and quarantine measures globally.

What will it take for China's tourism sector to make a full recovery? Seeing tourism as a key part of domestic consumption, Chinese policymakers have rolled out stimulus packages to support the tourism industry.

Tourist vouchers are being distributed in various provinces where travelers can use them to pay for sightseeing, dining and shopping. City officials in Huzhou, Zhejiang province, for instance, have distributed vouchers worth over 200 million yuan to tourists since March.

More importantly, the pace of recovery will depend on the confidence of Chinese consumers about their jobs and income growth. China has so far avoided large-scale job losses in the pandemic, but it remains to be seen how it will cope with a slump in global demand for Chinese goods.

Travel can be highly discretionary for middle-income Chinese consumers. Going forward, data on employment, household income and corporate credit default rates will be key to monitor.

For now, travelers are not ready to spend big yet given uncertainties over jobs and income growth.

An average tourist spent some 414 yuan a day during the May break, down 31 percent from a year ago, said the Ministry of Culture and Tourism.

Per capita spending was more than double that for the April 4-6 long weekend. Total tourism revenue came in at 47.6 billion yuan for the five days, less than half of the 2019 May holiday amount.