Individuals called upon to help protect cultural legacies throughout province 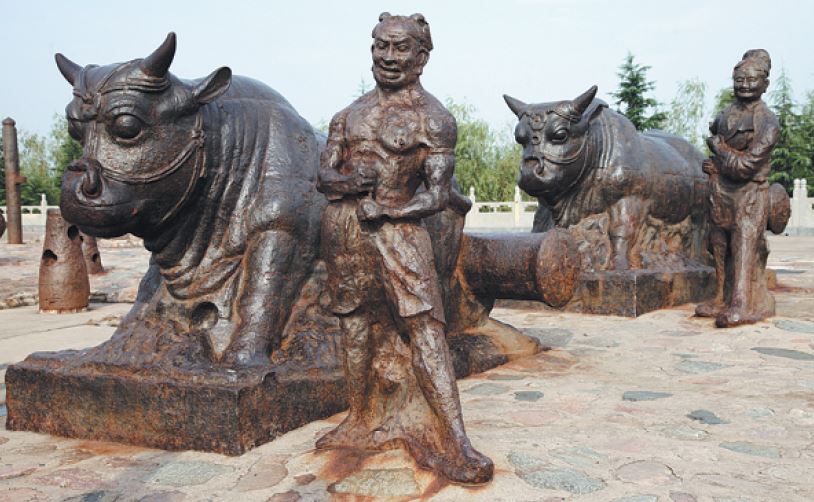 The iron oxen were salvaged from the water to stand on the Yellow River bank again.WANG WENLAN/FOR CHINA DAILY

Located at the heart of the Yellow River Basin, Shanxi province is one of the cradles of Chinese civilization.

It is said to be the homeland of Red Emperor, Emperor Yao and Emperor Yu, the founding fathers of the Chinese nation some 4,000 years ago.

The reason why the land called Shanxi today is one of the sources of Chinese civilization is that it is blessed by the Yellow River.

More than four millennia ago, residents in the region began to develop agriculture using the river and its tributaries to irrigate the fertile land. The Red Emperor, who is also called Shennong－which means "God of Farming"－was the forefather of Chinese agriculture.

This history has left a wealth of cultural heritage, attracting people to pay homage to the historical figures who contributed to China's development while enjoying the scenic views of the province.

The cultural legacies are embodied in the many preserved relics, including ancient buildings, villages and towns scattered throughout Shanxi.

However, as the relics are hundreds or even thousands of years old, protecting them becomes a challenge.

In Pujindu village in Yongji city, people frequently mention four iron oxen statues that were built some 1,200 years ago.

Historical documents show that the iron oxen stood on the Yellow River bank. But they sank when the river changed its course during the Yuan Dynasty (1271-1368).

The iron oxen were salvaged in 1988 and now they stand on the river's bank again.

The salvage was seen as an act to protect the relics from being corroded and worn by moving sands.

Not every relic is as lucky. Many of them, especially ancient buildings, have disappeared after they were weathered by time or destroyed by human activities.

According to Zhao Shuguang, deputy chief of Shanxi Culture Relics Bureau, the province is currently home to 28,027 ancient buildings, accounting for 80 percent of the nation's total.

"It is not practical for the governments to protect all the relics by relying on their own resources,"Zhao said.

The official said the governments in Shanxi are calling on individuals and businesses to act as sponsors for such relics and take responsibility for their protection and maintenance.

"I spent about 3 million yuan ($422,100) repiaring the temple. The cost is not a problem for me," said Cao who is a businessman and an enthusiast of cultural heritage.

"However, its daily maintenance will take more effort."

In Beiniuchi village in Wanrong county, the Xie's Family Temple is on the local list of cultural heritage protection.

Xie Xinquan, 72, and dozens of his relatives are responsible for the maintenance and protection of the temple.

"It's my honor to be the sponsor of the site, as it is my own family temple and a precious cultural legacy in my county," Xie said.

Li Yali contributed to this story.