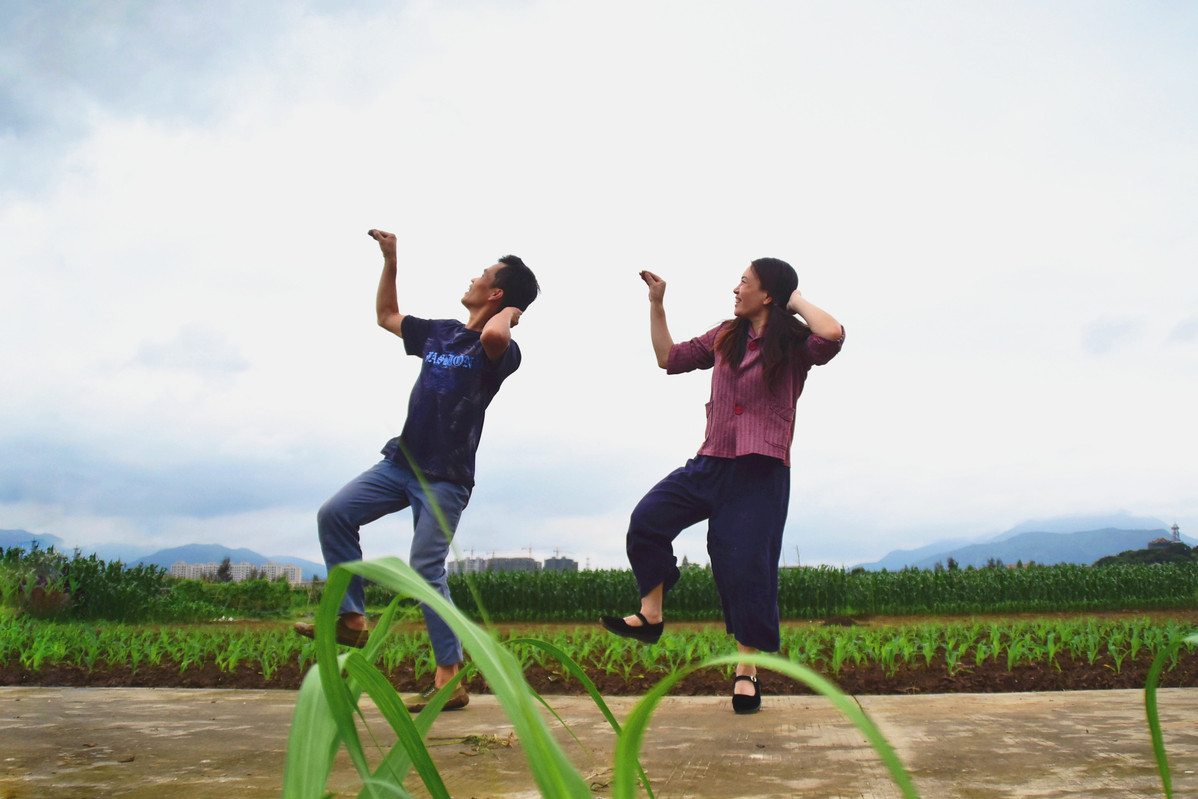 Fan Deduo (left) and his wife, Peng Xiaoying, dance beside their field in Ruian, Zhejiang province, this month. [Photo/Xinhua]

When life tries to bring you down, just dance!

That's the message from Peng Xiaoying, 45, and her 49-year-old husband, Fan Deduo, in Zhejiang province.

The couple－farmers who grow corn on a half-hectare field in Mayu township in Ruian, Wenzhou－recently went viral on the internet with a shuffle dance step they invented. They've cheered up millions of Chinese who have responded to the couple's smiling faces and easygoing approach to life.

Dancing along the path to the field, dragging their feet and sometimes jumping into the air to imitate ducks offers the couple a mountain of joy, despite a failure in business, a serious traffic accident, illnesses and other troubles.

"Whenever we feel upset, the shuffle dance always helps cheer us up and lighten our mood. It has been such an uplift in our lives," Peng said. "I think the main reason we get so happy when we dance has to do with the idea of our exercising with the shuffle on the ridges. It's really exciting."

The couple turned to dancing about four years ago.

Fan had been chronically depressed after a severe traffic accident in Yunnan province 18 years ago. He became nervous, irritated by trivial matters, and had trouble sleeping at night due to the accident. The couple then decided to wrap up their shoe-selling business in Yunnan and return to their hometown, Ruian.

To help conquer his depression, Peng, who was a big fan of dancing in public squares, invited Fan to join her. The minute he began, his suffering eased like magic.

The couple then became frequent participants in square dancing. That's where they invented the shuffle, incorporating some elements of everyday and rural life such as combing hair and pumping bellows.

During the novel coronavirus epidemic, the couple uploaded their dance videos to Douyin, also known as TikTok, and began livestreaming on the sharing platform. Their innocent smiles and unique dance steps took cyberspace by storm, with more than 1.6 million netizens now subscribing to their channel and following their dancing on the platform.

"Look at them! I think that's really what the essence of dancing is about－not showing off but really bringing happiness and joy to the dancers themselves in a simple way. This is the most beautiful dancing I've ever seen," one netizen enthused.

For the dancing couple, expression is everything.

"We love life in the countryside. We dance after our daily work," Fan said. "It's a dream life.