Peru gets tips from Chinese medical team on fighting COVID-19 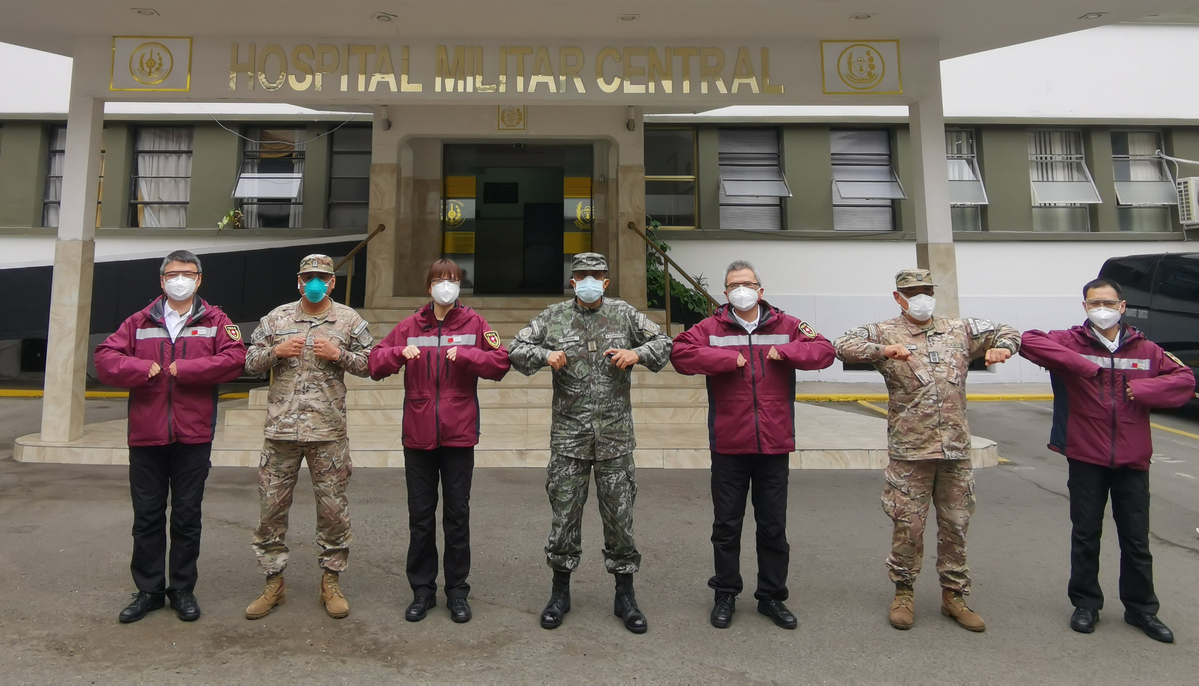 Chinese experts pose with medical workers at the Hospital Militar Central in Lima, Peru, on Tuesday. Invited by Peru's Ministry of Defense, the team visited hospitals and shared its experiences in fighting COVID-19. [Photo/XINHUA]

Editor's note: This series tells the stories of selfless individuals, from medical workers to volunteers, who are bravely fighting the virus outbreak with extraordinary dedication.

Chinese experts sent to Peru, a country in South America, to help fight the coronavirus epidemic shared their experiences in epidemic control and patient treatment, and made recommendations to strengthen the country's healthcare system.

Some of the suggestions included the raising of standards for discharging recovered patients, understanding related medicines and vaccines, protecting medical workers and laying out guidelines for patient treatment, said Guo Yi, the team leader.

They gained rich experience during their 40-day stint in Honghu, a city in Hubei province, helping local hospitals in patient treatment and infection prevention. Hubei was hardest hit by the epidemic.

Since their arrival on May 23, the team members have held meetings with hospitals, healthcare administration agencies and Peru's anti-COVID-19 action team in capital Lima. They shared Chinese expertise in epidemic control and patient treatment.

During these meetings, they answered questions about the difference between nucleic acid and antibody testing, the spread of the epidemic, the effects of pharmaceuticals, vaccine development, tracing those who had close contact with infected people, and prevention of infections among the health workers, according to Guo.

"They were enthusiastic. The front-line workers had many questions. The (interactive) sessions were often extended."

Peru has reported 187,400 confirmed cases and 5,162 deaths as of Sunday, according to the World Health Organization.

The Chinese team suggested that mobile cabin hospitals be built to admit patients with minor symptoms to form a layered hospital system so that the general functions of hospitals can be maintained and infections in communities can be curbed.

Peru has a diverse healthcare system, with hospitals administered by entities such as the health ministry, social health insurance agency and the military.

The team visited a number of hospitals, including the Hospital of Emergencies of Villa El Salvador, in Lima. "They wanted us to visit the wards and offer guidance," Guo said.

The team helped devise a plan for changing clothes for health workers in the intensive care units and quarantine wards in some hospitals. "We are concerned about the infection rates among medical workers and offered our suggestions," she said.

The team shared the patient treatment principles, including the time for intubation (the insertion of a tube into a patient's body) or ventilator operation.

It visited Arequipa, Peru's second-most populous city, on Wednesday and learned that two labs in the region were capable of conducting nucleic acid tests.

While testing has largely focused on antibody tests in Peru, the team stressed the importance of nucleic acid tests. Some hospitals, if upgraded, would be capable of such testing, Guo said.

Since several discharged patients had tested positive for the virus again, the team suggested that the standard for discharging patients be raised.

With movement restrictions having been gradually relaxed in the country, the team made suggestions to some district governments about which areas to be opened first and the requirements for reopening.

The team had videoconferences with the people of Chinese origin and Chinese nationals in Peru, sharing information on personal protection and resumption of work after the nationwide lockdown.

The team presented a report on its suggestions to the Peruvian government before concluding its mission.

Talking about her experiences in the South American nation, Guo said she now has a better understanding of the balance between economy and epidemic control.