Research: Coronavirus came to UK 'on at least 1,300 separate occasions'

A study by one British agency shows that the outbreak in the UK is not caused by a single patient, but by at least 1300 different sources. China's initial novel coronavirus pneumonia cases are mostly from European countries, and less than 0.1% of the total cases come directly from China. 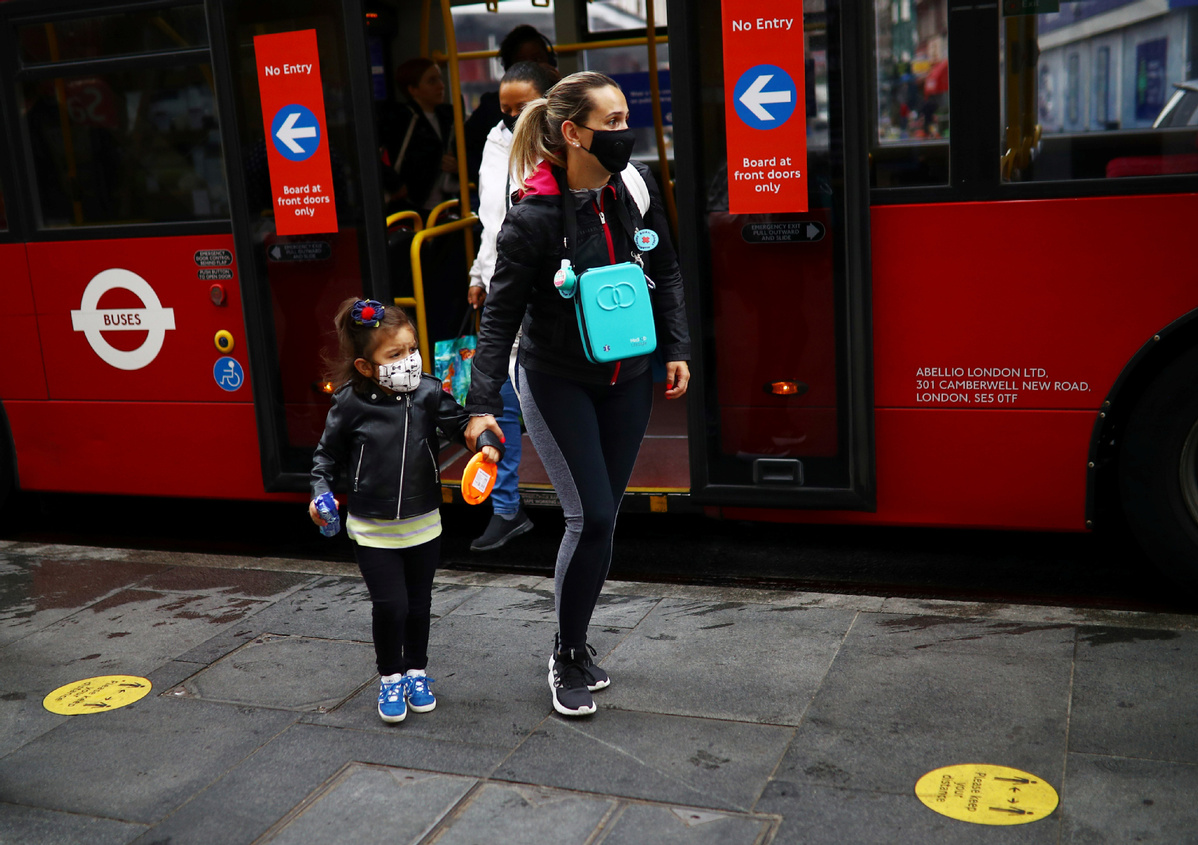 A woman and child wearing protective face masks get off a bus in London on Wednesday, complying with a new rule that requires people using public transport in the UK to wear face coverings. HENRY NICHOLLS/REUTERS

Coronavirus was brought into the UK on at least 1,300 separate occasions, a major analysis of the genetics of the virus shows.

The study, by the Covid-19 Genomics UK consortium (Cog-UK), completely quashes the idea that a single "patient zero" started the whole UK outbreak.

The analysis also finds China had a negligible impact on cases in the UK.

Instead those initial cases came mostly from European countries.

The researchers analysed the genetic code of viral samples taken from more than 20,000 people infected with coronavirus in the UK.

Then, like a gigantic version of a paternity test, the geneticists attempted to piece together the virus's massive family tree.

This was combined with data on international travel to get to the origins of the UK epidemic.

They found the UK's coronavirus epidemic did not have one origin - but at least 1,356 origins. On each of those occasions somebody brought the infection into the UK from abroad and the virus began to spread as a result.

"The surprising and exciting conclusion is that we found the UK epidemic has resulted from a very large number of separate importations," said Prof Nick Loman, from Cog-UK and the University of Birmingham.

"It wasn't a patient zero," he added.

The study showed that less than 0.1% of those imported cases came directly from China. Instead the UK's coronavirus epidemic was largely initiated by travel from Italy in late February, Spain in early-to-mid-March and then France in mid-to-late-March.

"The big surprise for us was how fluid the process was, the rate of and source of virus introduction shifted rapidly over the course of only a few weeks," said Prof Oliver Pybus, from the University of Oxford.

"This happened later than perhaps we would have expected," added Prof Loman.

The study estimates 80% of those initial cases arrived in the country between 28 Feb and 29 March - the time the UK was debating whether to lockdown.

After this point, the number of new imported cases diminished rapidly.

The earliest one could be traced back to the beginning of February, but it is possible there were cases even earlier that could not be picked up by the analysis.

The study also says the controversial football match between Liverpool and Atletico Madrid, on 11 March, probably had very little impact on bringing the virus into the country.

An estimated 3,000 fans flew in from Spain to watch the game, but there were 20,000 people flying in from Spain every single day in mid-March.

"[It] shows that individual events such as football matches likely made a negligible contribution to the number of imports at that time," the study says.

The imported cases each started off a chain of transmission where the virus is passed from one person, to the next, to the next and so on.

However, the study shows lockdown has massively disrupted the spread of the virus.

"If there's good news here, these chains of transmission were and are being suppressed and going extinct as a result of social distancing and we continue to see that now," Prof Loman said.