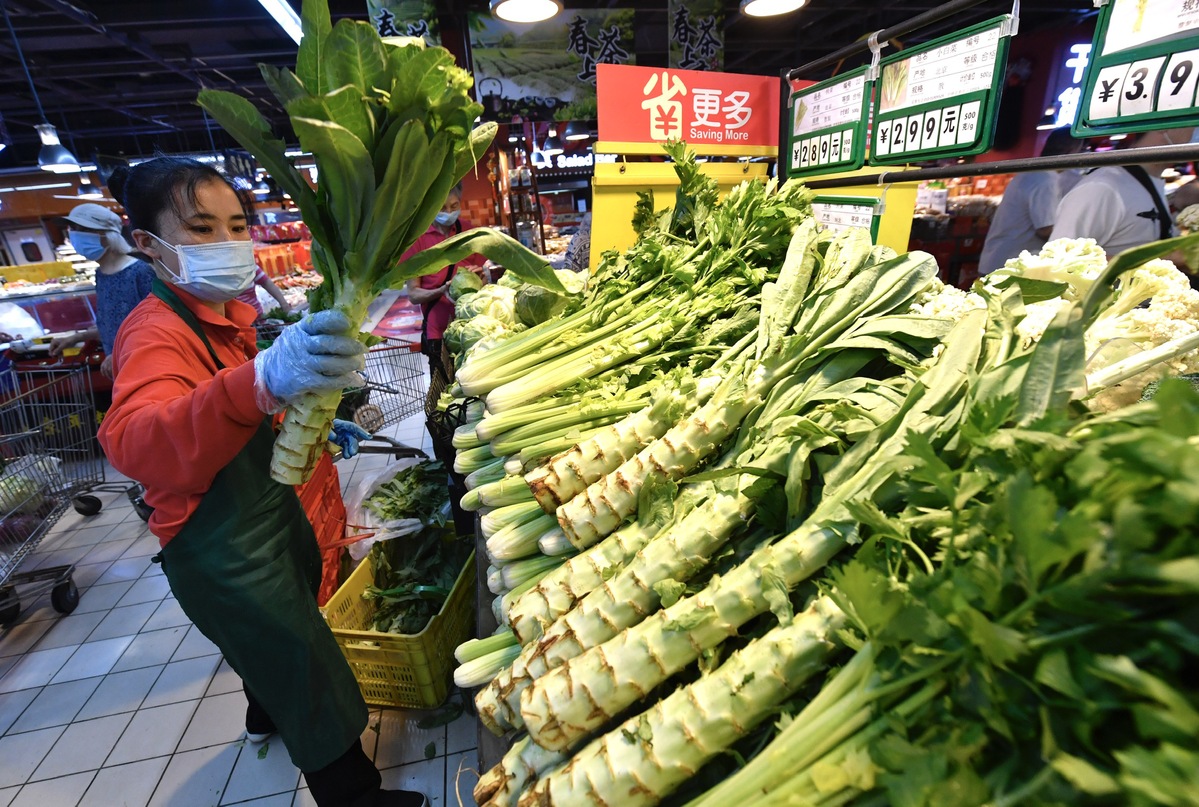 An employee stacks fresh vegetables on a counter in a Beijing supermarket on Sunday. [Provided to China Daily]

Authorities and businesses are working to guarantee Beijing has an adequate supply and delivery of vegetables and fruit following the capital's largest wholesale vegetable market being closed after its link to a new cluster of COVID-19 cases was detected.

Wang Hongcun, a senior Beijing Bureau of Commerce official, said emergency measures have been put in place to guarantee the food supply during the closure of Xinfadi wholesale market in Fengtai district.

The market has been temporarily closed since 3 am Saturday and service at a nearby long-distance bus terminal has also been suspended since that day.

Massive quantities of vegetables and fruit have been arranged to maintain Beijing supplies.

"The supply of daily necessities in Beijing ran smoothly on Saturday, in an orderly manner and with a stable supply provided for major supermarkets," Wang said at a news briefing in the capital on Sunday.

"However, owing to disease prevention and control measures, the prices of vegetables at some supermarkets and markets rose and some varieties of vegetables have been out of stock for a short period," he added.

Wang said on Saturday that Xinfadi market provides 90 percent of the capital's vegetables and fruit and its temporary closure could affect supply.

Vegetables and fruit previously traded at the market have been moved to five designated areas for wholesale trading. These temporary trading venues will not be open to the general public.

Coordinated efforts to ensure market supply were called for at a meeting presided over by Beijing's Party Secretary Cai Qi on Saturday morning.

It was decided at the meeting that communication between the capital and neighboring cities' markets should be strengthened to ensure a constant and abundant vegetable supply for Beijing, as well as that district officials in the capital should keep in mind that ensuring the availability of Beijing residents' daily necessities was essential.

Xinfadi wholesale market became a focal point of attention after it was learned that all 36 confirmed, locally transmitted COVID-19 cases reported in Beijing on Saturday were somehow associated with it.

"Our long-term cooperative production bases helped with timely vegetable and fruit supply for more than 90 communities and 40 workplaces in Beijing," he said.