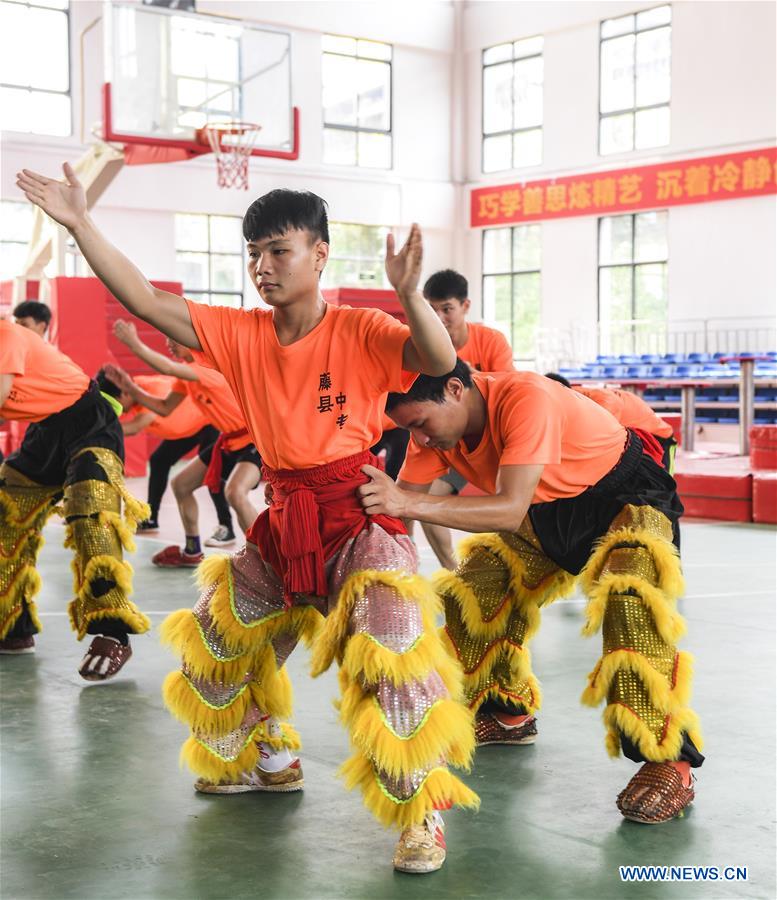 Wagging head and tail, tweaking ears and scratching cheeks -- performers in a golden lion costume leaped from one pillar to another and then cavorted on the ground to the clangs of cymbals, gongs and drum beats as they practiced a set of dance movements in Tengxian County. When they finished, two young men doffed the costume -- Qiu Haiwei, 17, had performed as the "lion head", and Huang Qingliang, 16, as the "tail". Both are dance majors at a local secondary vocational school.

Lion dance is a traditional performing art form of China. Lion dances are staged on festive occasions such as Spring Festival to entertain people. The tradition is believed to have originated in the Three Kingdoms Period (220-280 A.D.) and peaked in the Northern and Southern dynasties (420-589 A.D.).

The Tengxian Lion Dance performed by Qiu and Huang belongs to the Southern Lion clan, which seeks to mimic the lion with martial art and acrobatic stunts. The art was listed as a national intangible cultural heritage in 2011. "The lion dance has been an indispensable part of our life," said Huang. "In my childhood, whenever there were drumbeats and bell ringings, I would know that a lion dance was on and rush for the show." "Their movement from pillar to pillar made one feels as if they were flying," Qiu recalled from his memory of the performers' breathtaking techniques.

Out of love and curiosity for the traditional art, the duo started learning the lion dance two years ago. But learning a performing art was a very different kettle of fish from simply watching it. "It took us half a year to learn the basic skills and moves. We practiced so hard that we always sweat buckets and got hurt sometimes," Huang said. The hard work paid off. From squatting to prancing, to making a life-size lion puppet that can blink in accord with their manipulation, Qiu and Huang improved their skills, which earned them opportunities to perform at celebrations like the grand openings of businesses, and to compete against other local lion dance troupes.

Besides dancing, students at the vocational school also learn to make costumes. "We make lion heads, tails and legs at the school workshop under the guidance of professionals," said Qin Jinmin, a 16-year-old drummer who often accompanies Qiu and Huang during dance practices. "Though the handcraft is demanding, it is worth learning," Qin said. "We not only make a living by mastering the skills, we also gain a better understanding of the lion dance itself."

Still, the ancient art form is mired in flagging support and loses favor with the young people, as the skills take years to master while meager wage is earned. Professional coaches and funding are hard to find, making it even more arduous for a lion dance troupe to survive, according to Deng Minghua, a national inheritor of the cultural heritage.

Local authorities have set up four training bases since 2017 and teamed up with enterprises and schools to help the ancient art reboot. The Tengxian secondary vocational school also launched a lion dance class and a training venue to roll in more lion dance learners. "We must work hard to help pass on the heritage and its spirit to future generations," Deng said. (Xinhua/Cao Yiming) 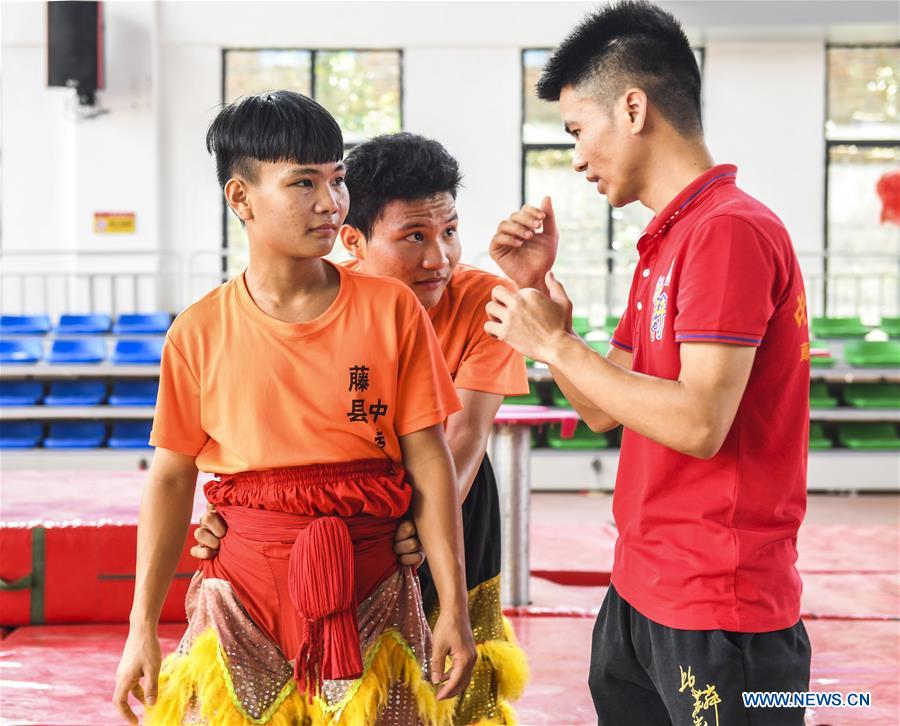 The coach is telling the skills about the lion dance performance.[Photo/Xinhua] 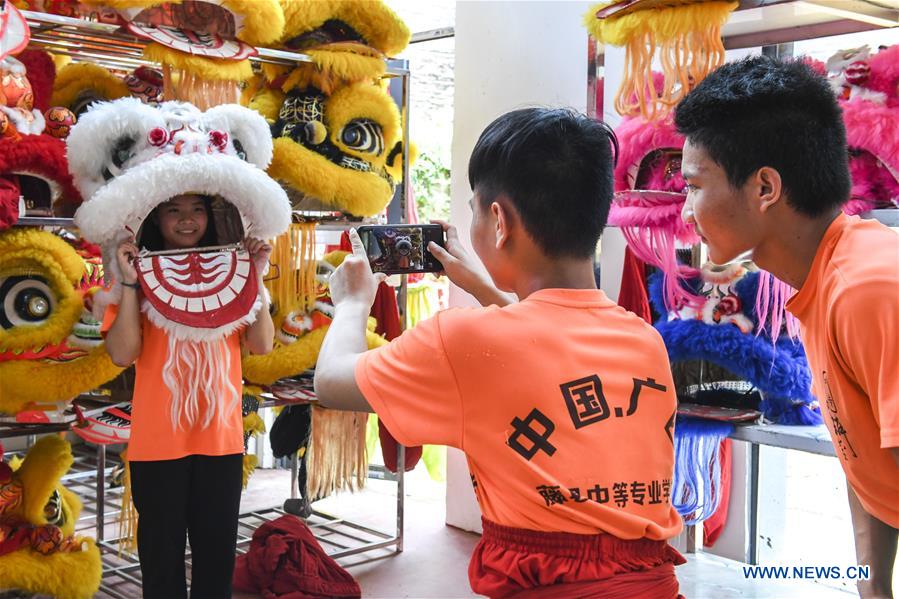 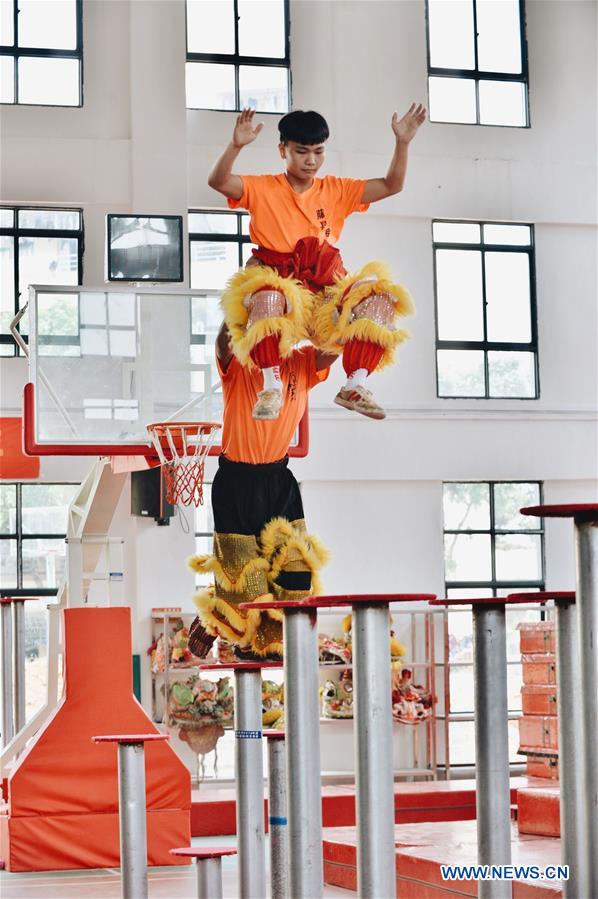 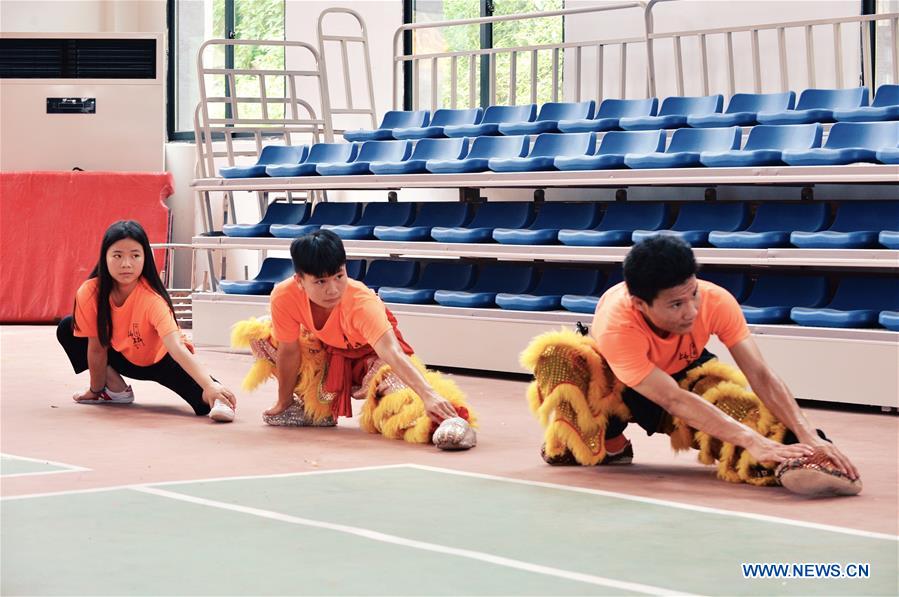 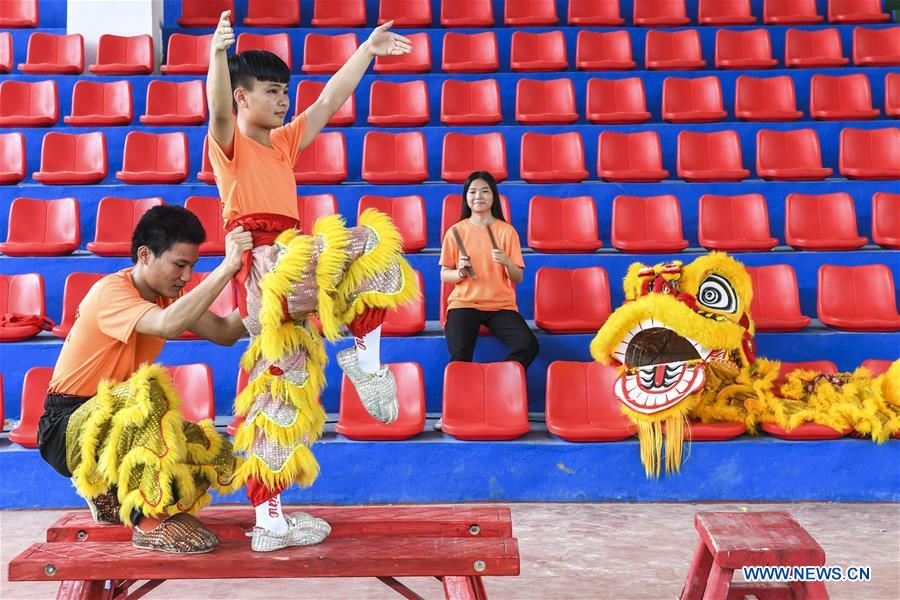 Deng Minghua, a national inheritor of the cultural heritage, is telling the knowledge for Qiu Haiwei and Huang Qingliang. 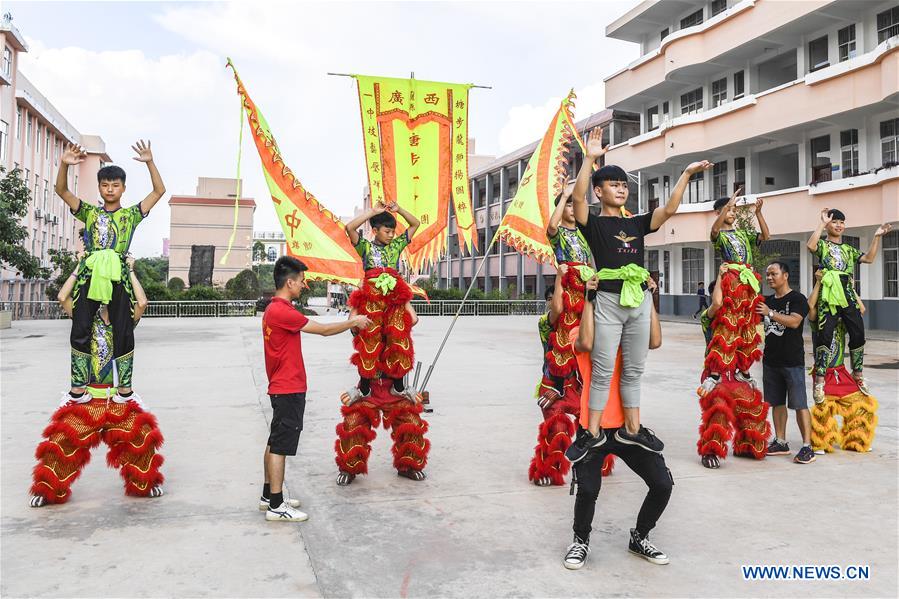