Crowds flock to shops as lockdown is eased in Britain 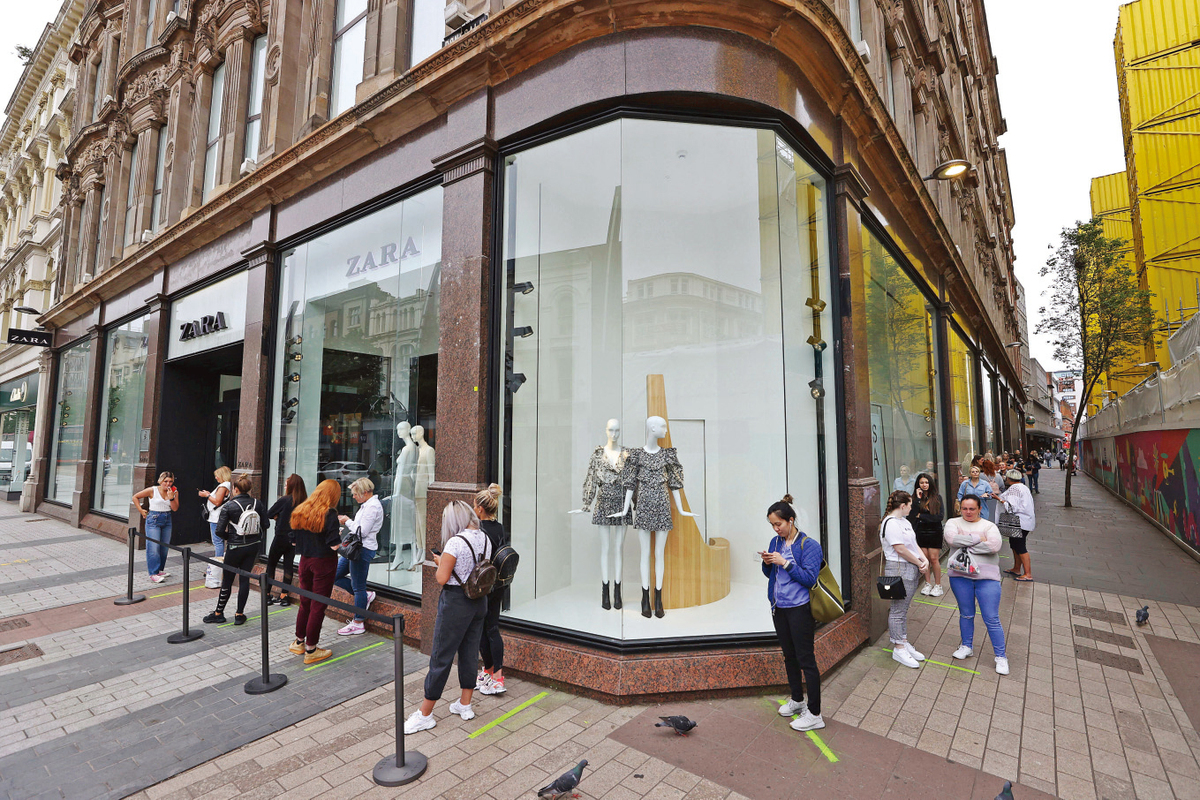 Shoppers queue outside a Zara store in Belfast, Northern Ireland, on Monday. Non-essential shops are also reopening in England for the first time since the country went into lockdown in March. [LIAM MCBURNEY/THE ASSOCIATED PRESS]

High streets and shopping centers across the United Kingdom saw long queues and big crowds on Monday as more shops were allowed to reopen following the relaxing of novel coronavirus lockdown measures.

Social distancing added to the length of many lines, but at the high-profile Nike Town store in Central London, some people pushed and jostled to get in the door, despite wearing face masks as a health precaution.

In the short term at least, shopping will be a very different experience, with most clothing shops shutting fitting rooms, and many stores having to decontaminate items that are handled but not bought.

At Monday's daily media briefing, Foreign Secretary Dominic Raab said the government was "sticking to its plan" and that progress on further easing lockdown would be "based on strict conditions".

"We can't just pretend that coronavirus has gone away or we've eliminated the virus," he said, as he announced that an additional 38 deaths had taken the overall total of COVID-19 deaths with a positive test to 41,736. "There is a risk of a second spike if we're not very careful."

Facemasks, which have become an increasingly common sight over the last few months, are now compulsory on public transport in England. Passengers who refuse to put them on could be prevented from boarding or face fines.

With public transport use still being discouraged, facemasks may become even more advisable as the lifting of lockdown could cause an increase in the use of private transport, with a consequent impact on air quality levels, if the UK follows the pattern of other European countries.

Across the UK, lockdown has led to a dramatic improvement in air cleanliness, and government at all levels faces a challenge on how to keep up this level of improvement.

"The link between vehicle traffic and pollution is well understood and there has been an obvious reduction in vehicles moving around the city during lockdown," Anna Richardson, convenor for sustainability and carbon reduction in the Scottish city of Glasgow, told the BBC. "Making sure the gain in air quality made in recent months is not lost is part of the considerable challenge the council faces as we emerge from the COVID-19 crisis."

Mental health has also been impacted by lockdown. Data published by the Institute for Social and Economic Research at the University of Essex has revealed women are suffering more as a result of the social impact of novel coronavirus.

While the world of commerce may be stirring back to life, many social restrictions remain in place, and people are working from home or on furlough, with women appearing to be facing the most strain as a result of being deprived of socializing opportunities.

"It's well documented that women have drawn the short straw on several different fronts," said economist Ben Etheridge, one of the compilers of the study. "For example, they are more likely to have lost their jobs."

But issues such as increased childcare and domestic expectations are also taking their toll. "Women are more likely to report multiple numbers of close friends," he said, so being denied that usual contact is having greater impact on them than on men.

The survey revealed that the group whose mental health was being most affected was women under the age of 30. The least affected group was men aged between 50 and 69.

Those saying they had smaller existing groups of friends are reported to be feeling the impact of social distancing the least.