Guozhuang dance is a favorite collective bonfire dance of Tibetans, allowing them to show respect and reverence to nature.[Photo/Xinhua]

About 160 Tibetan people gathered at Dukezong in the majority Tibetan city of Shangri-La on Saturday for a contest of a traditional Tibetan dance -- Guozhuang.

It is believed that the prototype of "Shangri-La," an earthly paradise depicted in the 1934 fictional book "Lost Horizon" written by James Hilton, is Zhongdian county in Deqen Tibetan autonomous prefecture of Southwest China's Yunnan province. In 2001, the county was authorized by the central government to rename itself Shangri-La city.

As tourism develops in the city, local culture is exposed to more tourists from across the globe, and inheriting intangible culture means more than preserving tradition but also introducing it to the world.

Some Tibetan youths in Deqen shared their views on intangible cultural inheritance in modern society.

Guozhuang dance is a favorite collective bonfire dance of Tibetans, allowing them to show respect and reverence to nature.

Wandering in the old town of Dukezong in the daytime, one can always see elderly Tibetans, mostly women, dancing in a circle while singing traditional Tibetan songs.

When dusk falls, Tibetan youths, after finishing a full day's work or study, will come outdoors to dance with a faster pace and more joyful music.

"Guozhuang dance has been about paying respect to nature since ancient times, but now when we dance, it is more about recording and passing down our ethnic memory and tradition with every step," said Losang Tashi, a 28-year-old Tibetan in Shangri-La.

Losang Tashi has worked as a tourist guide for nearly seven years. The booming tourism in the city has given him more opportunities to make a living and understand the outside world, but the increasing number of tourists also means more working time, thus greater stress.

"When I feel bitterness in daily life, I always dance Guozhuang to relieve my pressure. It makes my mind fully relaxed," he said. "Just as many watch TV dramas and play online games to relax, many Tibetan youths like me are fond of dancing to our traditional music, so it means a lot to us," he said.

The tourist guide has been enthusiastic about sharing the local stress reliever with visitors from across the world.

"When other non-Tibetan people watch us dancing, I can bring happiness to them," he said. "I feel so satisfied when I tell tourists about what messages Guozhuang dance conveys."

In today's Dukezong, tourists may be astonished to find some young Tibetan lads dancing Guozhuang to the songs of Michael Jackson. "We are bold and creative," Losang Tashi said. "Everyone says Shangri-La city is also the Shangri-La of the world, so we are proud we can embrace more cultural differences."

In Nixi township of Shangri-La, locals have passed down an old saying for generations, "The most delicious tea is the butter tea made in black pottery by our mothers."

The special soil in Nixi has made it a major place for black pottery production. It is home to more than 100 varieties of black pottery with a history of over 1,000 years.

Larong Shoba, 28, was born in a family of black pottery makers. His father is one of China's earliest state-level intangible culture inheritors.

"I feel the black pottery is calling to me," said Larong Shoba. After graduating from college, he returned to his village to help his father develop his black pottery business.

As a growing number of tourists swarm into Nixi, black pottery gains more popularity. With the government's support, black pottery has become a symbol of Nixi and helped local villagers shake off poverty. Now about 120 households in Larong Shoba's village engage in the black pottery industry.

While believing the pottery inherits the crafts of his forefathers and records their ethnic cultural symbols, the young craftsman insists the pottery be reborn with new forms, instead of only being made into pots. He is willing to customize products to meet market demand, such as coffee cups and decorative pendants.

"My father always told me and other apprentices that we should learn how to make the traditional forms of the pottery first, then we are qualified to create new products on our own," he said.

"It's important to preserve the tradition, but in my view, promoting Tibetan black pottery to the world is more significant right now," he said. "The young generations focus more on the design of the products, so we need to make our products fashionable and attractive to the youth." 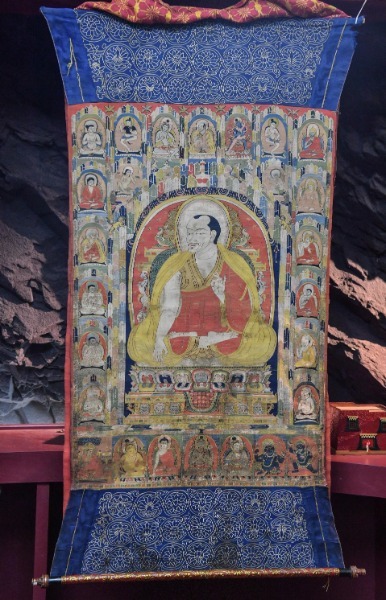 Thangka are Tibetan Buddhist scroll paintings on cotton or silk with mineral and organic pigments derived from coral, agate, sapphire, pearl and gold.[Photo/Xinhua]

"Thangka painting is a spiritual practice for Tibetan people," said Gesang Dawa, who opened the Shangri-La Thangka Institution in 2010 and has so far taught more than 200 students, for free.

Thangka are Tibetan Buddhist scroll paintings on cotton or silk with mineral and organic pigments derived from coral, agate, sapphire, pearl and gold. Originating in the 10th century, the paintings typically depict Buddhist deities with colors that can remain for centuries.

"It is a Tibetan art that one should learn from an early age, because it requires extreme concentration both mentally and visually. It usually takes a person seven to 10 years to master the technique," Gesang Dawa said.

Senag Doji, a 20-year-old Tibetan local in Shangri-La, has learned thangka painting at the institution for over three years.

A delicate thangka work can take anywhere from a few months to several years to complete. "While we are painting, we also study sutras, calligraphy and Buddhist history, in a bid to inch closer to our spiritual practice," he said.

"I don't drink or smoke and always keep my mouth clean after eating, because sometimes I use my tongue to wet the sacred pigments and pay respect to Buddha," said another apprentice Dawa Cering, who comes from Sichuan Province and has learned thangka painting for four years at the institution.

In 2006, China listed thangka as a national cultural heritage, a status that has since given the art a strong boost. UNESCO included thangka paintings, murals, patchwork crafts and sculptures as Intangible Cultural Heritage of Humanity in 2009.

"Many foreigners, mostly European youths, also come to the institution to experience how to paint thangka and they even stay here for months," Gesang Dawa said.

"When I talk with young peers from other ethnic groups and foreign countries, I don't have to leave Shangri-La to see the world," said Dawa Cering. "In this way, thangka can bring me closer to Buddha and the world."

The popularity of thangka increases their value as well. The prices of the works Gesang Dawa sells range from several hundred yuan up to 1.2 million yuan. His customers are from home and abroad, including non-Buddhists who regard thangka as artworks.

"As the market demand for thangka grows, more young Tibetans would like to be professional Thangka painters," said Senag Doji. "So I have enough confidence that such intangible culture will never fade away."

"The market and social resources can also be utilized to develop local culture and promote intangible cultural inheritance, as it can help with the employment of locals and cultivation of skilled workers," said Wang Yanzhong, director of the Institute of Ethnology and Anthropology of the Chinese Academy of Social Sciences.