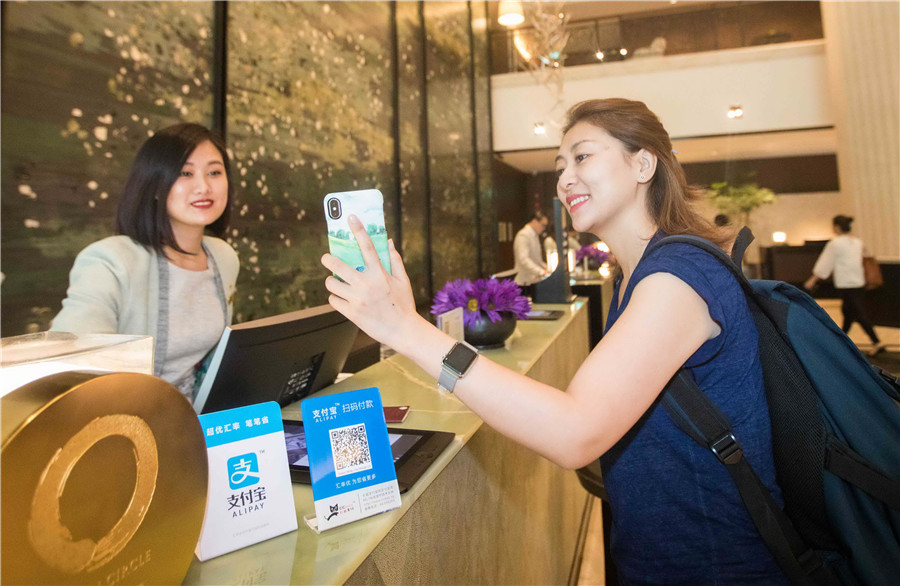 A traveler makes payment using Alipay at the counter of a Shangri-La hotel in Singapore. [Photo provided to China Daily]

Financial technology is essentially borderless, and this key characteristic is strengthening links between global financial centers and producing more opportunities for collaboration and integration.

Chen Lurong, an economist with the Economic Research Institute for ASEAN and East Asia, or ERIA, based in Jakarta, Indonesia, said, "Technological progress brings everyone closer and makes the world 'flatter' than ever before."

The ability of financial centers to remain competitive in the digital era depends on how quickly they can take advantage of the latest tools, such as artificial intelligence, cloud computing, big data and machine learning, and properly adjust to the new business environment, Chen said.

"Developing fintech can be a critical opportunity for Asian financial centers, given their higher demand for digital and mobile services," said Garcia Herrero, who is also an adjunct professor in the Department of Economics at Hong Kong University of Science and Technology.

According to research company Statista, the penetration rate of the mobile internet in the Asia Pacific region in 2018－with some 1.9 billion users－was 45 percent. The proportion is expected to rise to 62 percent in 2025.

Garcia Herrero said Asian financial centers are seeing the growing popularity of the move toward fintech in the region.

According to global accountants EY, worldwide adoption of fintech among consumers reached 64 percent last year, with "attractive rates and fees" the top reason for usage. China and India topped the rankings, with both countries having adoption rates of 87 percent, according to the company's Global Fintech Adoption Index 2019.

Garcia Herrero said better fintech infrastructure can improve productivity and efficiency for financial centers, while enhancing their ultimate competitiveness. She added that fintech offers information and speed advantages for financial transactions based on greater transparency and accuracy.

In August, China announced a three-year development plan for the sector, as it moves toward becoming a leading fintech country.

Last year, Beijing and Shanghai topped a list assessing the adoption of fintech by global financial centers, according to a study by think tanks the China Development Institute in Shenzhen, Guangdong province, and Z/Yen Partners, based in London.

In Southeast Asia, the ASEAN Payments Policy Framework is being developed to guide cross-border real-time payment and other fintech issues.

However, Biedermann said the financial industry is much broader than related institutions and regulators, because it also comprises startups, universities and other talent.

While cooperation between banks and fintech startups can be difficult due to different operating cultures, financial centers can play a role in helping manage the relationship and promote collaboration, he added.

The combined efforts of banks and fintech startups can be powerful, he said, as they can still add value.

According to a report by global consultants McKinsey & Co, banks throughout Asia are working with fintech startups to promote digital payments. One such example is the GrabPay by KBank mobile wallet, launched in Thailand by local bank Kasikornbank and in Singapore by the ride-hailing app Grab.

Chen, from ERIA, said that for the Association of Southeast Asian Nations and East Asia, financial integration and service sector liberalization feature among the main components of regional integration.