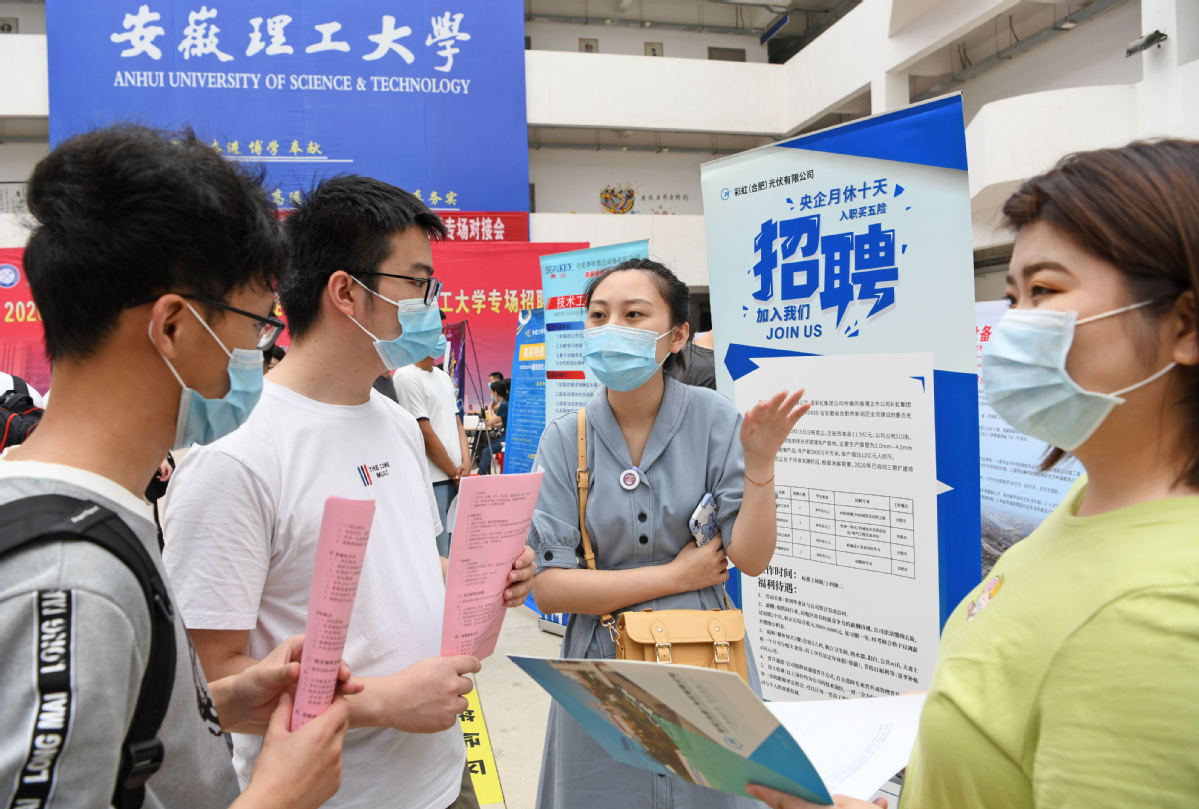 Job seekers stop by a company booth at a career fair at Anhui University of Science and Technology in Huainan, Anhui province, on Tuesday.CHEN BIN/FOR CHINA DAILY

Though the nation has progressively reduced its unemployment rate, it is still facing mounting pressure to stabilize hiring this year.

Data cited from the National Bureau of Statistics show that in May, the nation's surveyed unemployment rate in urban areas was 5.9 percent, a decrease of 0.1 percentage point from the previous month, sustaining a relatively stable job market. The rate in May 2019 was 5 percent.

Bureau spokesman Fu Linghui said in a release posted on the bureau's website on Monday that the resumption of work and production laid a solid foundation for stabilizing employment.

He said that more workers have come back to their positions in the past few months.

"According to our latest surveys, the proportion of companies in which over 80 percent of their employees have returned to work rose by 1.2 percentage points from late May to early June compared with our previous survey," he said.

However, the nation still faces challenges in relieving the pressure of the job market due to the huge number of job seekers and companies' diminished ability to recruit new employees after being hit hard by the COVID-19 outbreak, he said.

From January to May, there were 4.6 million jobs created in urban areas, a year-on-year fall of 1.37 million.

"The job market this year is not good, so graduates are having even more difficulty finding work," said Li Qiang, vice-president of Zhaopin, an online recruitment platform in Beijing.

Li said that part of the problem for graduates is that most don't have a clear idea about their ideal jobs. Further, their skills or qualifications may not be sufficient for certain positions.

"Capability of managing emotions, leadership and innovations are also elements that companies would consider in recruitment," he said.

According to the statistics bureau, in May the surveyed unemployment rates of vocational school students and college graduates from ages 20 to 24 were respectively 1.7 and 3.3 percentage points higher than in April.

"The population of college graduates will reach a record high of 8.74 million, which will possibly drive up the group's unemployment rate," he said.

According to the Ministry of Human Resources and Social Security, about 32,000 graduates will be recruited for grassroots positions nationwide this year, with 5,000 more vacancies than in 2019.