Workers clear falling rocks from a flooded section on a highway inYouyang Tujia and Miao autonomous county in Southwest China's Chongqing municipality after a rainstorm hit the area, June 13, 2020. [Photo/Xinhua]

The country has confronted sharply uneven rainfall distributions so far this rainy season, which has simultaneously triggered emergency responses for flood control and drought relief.

For the 24 hours starting at 2 pm Wednesday, heavy rain and rainstorms are forecast in some areas in 11 provincial regions, including the northeastern parts of Jiangsu and Sichuan provinces as well as Chongqing municipality, it said.

While the accumulated precipitation during that time will be up to 14 centimeters in these areas, the maximum hourly precipitation may exceed 8 centimeters. Some of the areas will suffer strong convective weather that is characterized by strong winds and thunderstorms, it added.

The latest round of rainfall, which started on Monday, has wreaked havoc in many of the affected areas. In Sichuan province, for example, the downpour resulted in a debris flow that has forced the evacuation of 5,800 people in Banshanmen township, Danba county.

The debris flow not only blocked a major local watercourse, resulting in a barrier lake, but also cut off a highway. The incident has triggered a Level 3 emergency response, the second lowest in the country's four-tier national emergency response system for disaster relief.

Online videos show that many residential buildings around the site have been isolated by muddy floods with roaring waves.

Zhang Kuikui, a native of the township who works out of her hometown, said she was awakened by constant messages about the situation from family members at 5 am on Wednesday.

Half of the family's three-story house has been washed away and the more than 30 chickens the family raises were missing, she told news website thecover.cn.

"Comparatively speaking, my family is not the one that suffered the worst. I heard that some houses near a local hydropower station have been destroyed," she said. 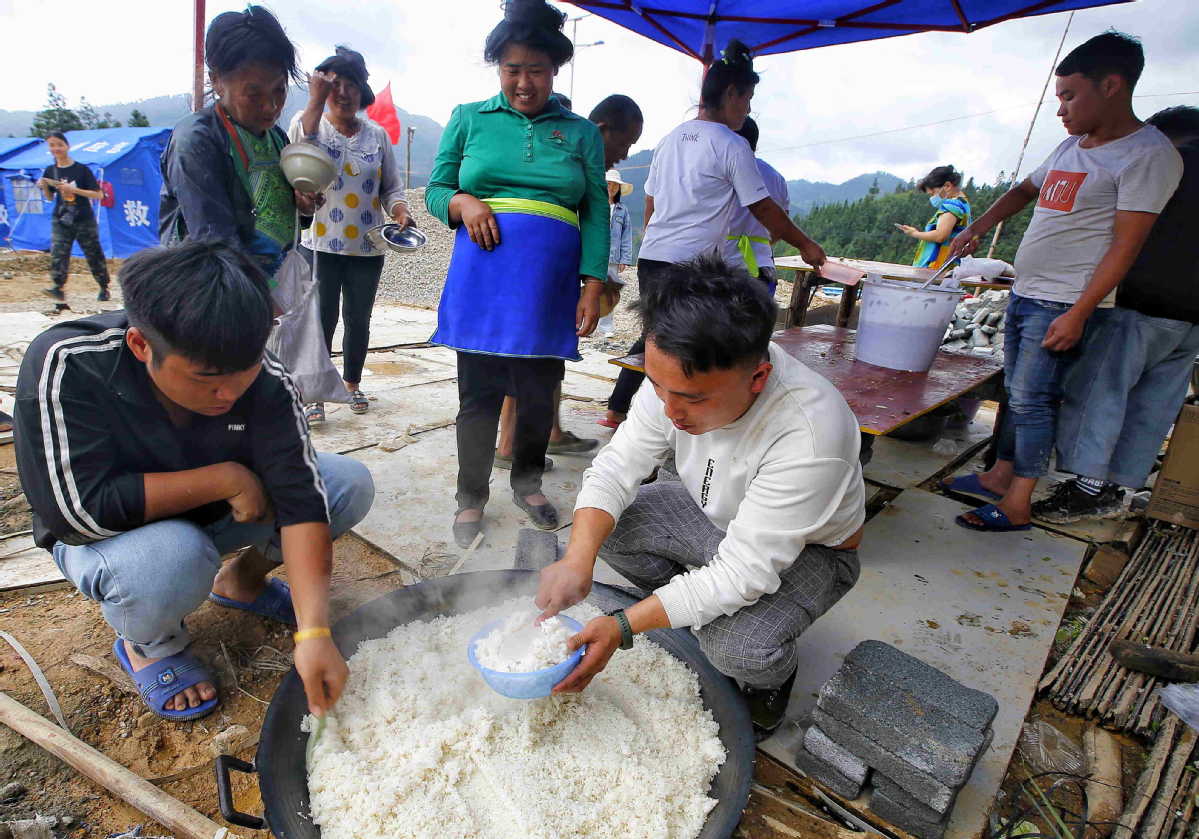 Over 200 rescuers were still busy searching for two missing people at press time.

Some areas in Sichuan, Shaanxi and Jiangsu provinces, including Jiangsu's capital Nanjing, have received precipitation of 25 to 31.6 centimeters since Monday, the National Meteorological Center said.

There is no sign that this round of rainfall will subside soon, though the affected areas will be smaller on Wednesday and Thursday. The rain will mainly cover Guizhou province and the middle and lower reaches of the Yangtze River from Saturday to Monday, it said.

In Yunnan province, however, the China National Commission for Disaster Reduction and the Ministry of Emergency Management has launched a Level 4 emergency response to cope with drought.

According to a media release from the ministry, it, together with the Ministry of Finance, has dispatched 60 million yuan ($8.5 million) in disaster relief funds to the province to help affected people.

Meanwhile, people in many regions will endure scorching temperatures over the next five days.

Most areas south of the Yangtze will be hit by a heat wave of 35 C to 39 C on Wednesday and Thursday. From Friday to Monday, the highest temperature in the Beijing-Tianjin-Hebei province cluster, the northern part of Shandong province and the central and western parts of Liaoning province could reach 40 C, the National Meteorological Center said.