Technicians are converting a Boeing 737 passenger plane into a freighter at an air maintenance base in Qingdao, Shandong province, on April 14. [Photo/WANG HAIBIN FOR CHINA DAILY]

Air cargo is playing an increasingly important role in the fight against COVID-19, as a substantial number of passenger aircraft have been grounded due to the pandemic.

Cargo flights have been growing in number and frequency between China and 84 international destinations in 51 nations and regions, according to VariFlight, a Chinese aviation data and solutions services provider.

In May, the number of outbound cargo flights from the Chinese mainland reached 4,910, surging 113.66 percent year-on-year. The number of inbound cargo flights to the Chinese mainland came in at 4,383, jumping 93.42 percent year-on-year, said VariFlight. The data only counted designated freighters and didn't include cargo aircraft that have been converted from passenger aircraft.

In late May, the Ministry of Finance and the Civil Aviation Administration of China, or CAAC, said it will provide financial support for both Chinese and foreign carriers who carry out cargo deliveries using commercial aircraft in order to cushion them from the COVID-19 impact.

Airlines can receive 80 percent compensation for costs involved in converting passenger aircraft into freighters, and they will receive financial incentives for flying international cargo flights between April 1 and June 30.

"The policy itself is more symbolic than substantive. Although the cost compensation can hardly make up for the loss in passenger flights, the measures are sending signals that the government supports airlines' international cargo operations. The supportive measures will help streamline and strengthen global freight transport capacity," said Lin Zhijie, an aviation industry analyst.

"The policy will grant subsidies to both domestic and foreign carriers as it requires the efforts of airlines both at home and abroad to build better freight capability in China," said Lin, who is also a columnist at carnoc.com, one of China's biggest civil aviation websites.

"At this stage, international cargo flights are more profitable. Even if there is no subsidy, carriers will actively carry out cargo flights and convert their commercial aircraft to freighters," he said.

Meanwhile, China's domestic air travel market is gradually picking up after being ravaged for months by the COVID-19 pandemic.

In May, 25.8 million people traveled by air both domestically and overseas, down 52.6 percent year-on-year, while the decline was 15.9 percentage points less than that recorded in April. The transportation volume by freighters reached 228,000 metric tons, growing 21.8 percent year-on-year, according to CAAC.

In the first four months, sales revenues at Sichuan Airlines were only 30 percent of the amount recorded a year earlier. At its worst point during the novel coronavirus pandemic, the carrier suffered reduced revenue of 70 million yuan ($9.88 million) daily, the company said.

Prior to the outbreak of the contagion, it had three Airbus A330 freighters. Since the outbreak, the carrying capacity of the three freighters was saturated. It then retrofitted eight existing passenger aircraft into cargo freighters, and thus improved capacity and increased revenue.

"So far, our cargo flight networks have covered Southeast Asia, Europe, North America and the Middle East. Sales revenue of the 11 freighters is about 20 million yuan daily. The air cargo business has bright growth prospects, and we will continue to develop it," said Li Haiying, president of Sichuan Airlines. 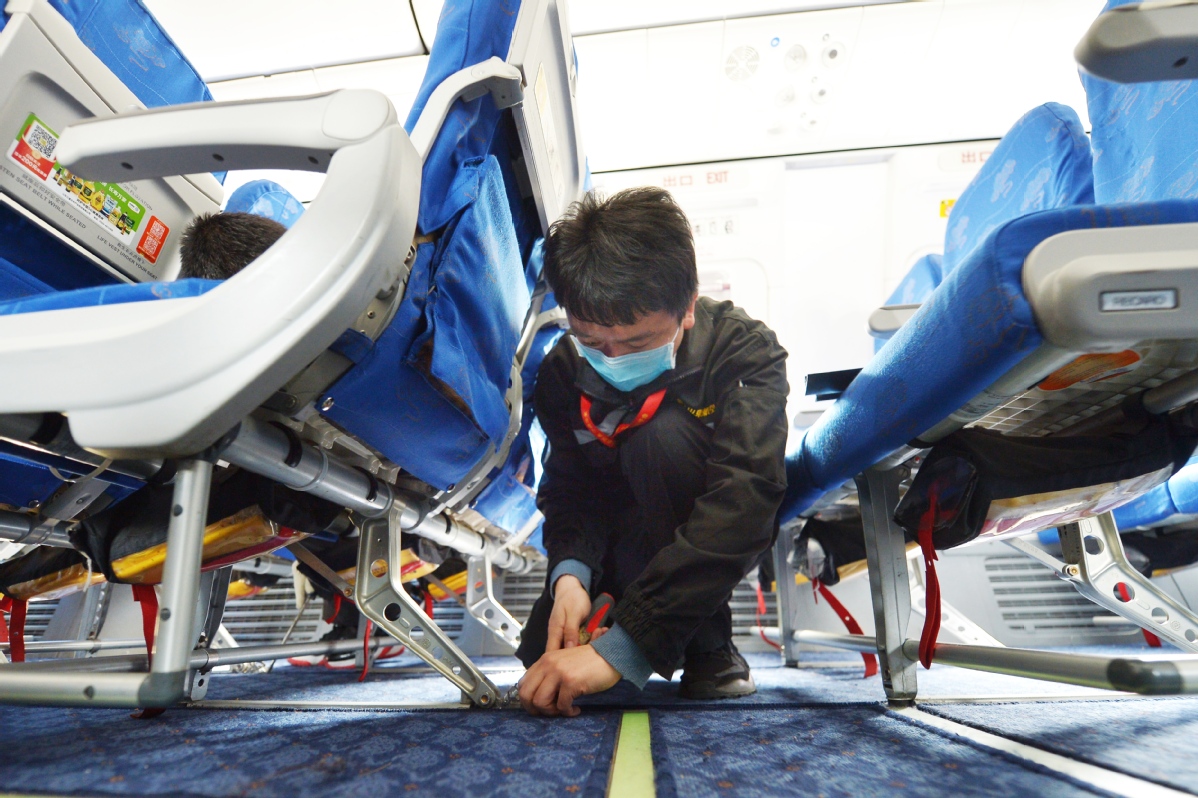 Technicians are converting a Boeing 737 passenger plane into a freighter at an air maintenance base in Qingdao, Shandong province, on April 14. [Photo/WANG HAIBIN FOR CHINA DAILY]

Another US carrier, Delta Air Lines, said its flight schedule in the second quarter is 85 percent smaller than that of the same period of last year. It reduced 80 percent of domestic capacity in the US and 90 percent of overseas capacity.

Delta said its resumption of passenger flights to China is subject to Beijing's approval. It will also operate cargo-only scheduled services between Shanghai and Atlanta/Los Angeles.

"We're proud to be supporting this effort by adding more flights between Asia and the US to help meet the increasing demand for equipment for the healthcare industry," Cole said.

In late March, Qatar Airways became the first Middle Eastern carrier to resume belly-hold operations to all of its six destinations in China with passenger-converted aircraft, driven by growing demand for the shipment of medical supplies and other goods.

Separately, European aircraft manufacturer Airbus is developing a modification for the A330 and A350 family of aircraft. It will enable carriers to install freight pallets directly onto the cabin floor seat tracks, after removal of the economy-class seats.

Airbus said the solution will help with airlines' business continuity and alleviate the global shortage of belly-freight air cargo capacity because of the widespread grounding of passenger aircraft due to the pandemic. In addition, it will help the industry to meet high demand for humanitarian flights that transport medical equipment and other supplies.

"Compared with loading cargo onto seats, the solution facilitates easier and quicker loading and unloading operations, as well as reduced wear-and-tear operations to the seats themselves," Airbus said in a statement.

Airbus said the conversion includes the removal of the seats and in-flight entertainment systems, installation of cargo pallets and associated safety equipment as well as the re-installation of the original passenger cabin elements for reverting back to passenger operations. The approach will also be valid beyond the COVID-19 pandemic.