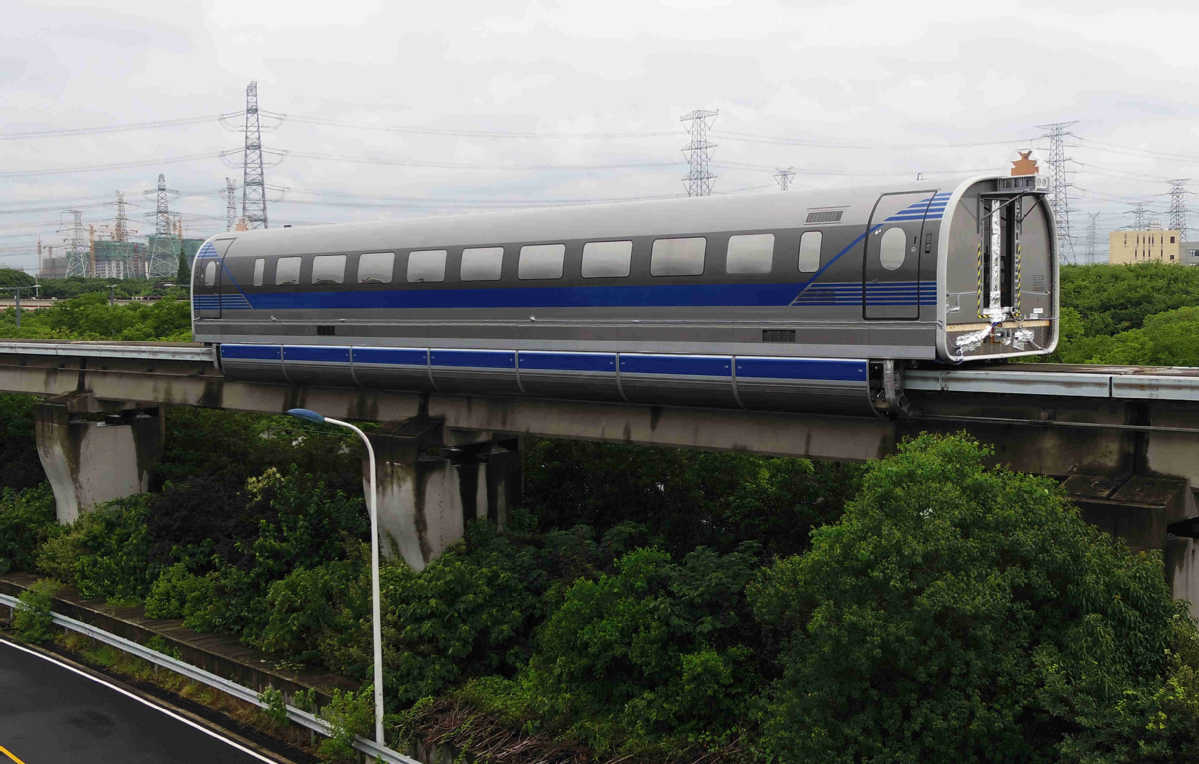 The maglev train makes a test run on the track at Tongji University in Shanghai on Sunday.DENG WANGQIANG/FOR CHINA DAILY

A prototype of a new magnetic levitation train with a top speed of 600 kilometers per hour completed its first test on a track in Shanghai on Sunday.

Designed and made by CRRC Qingdao Sifang in Qingdao, Shandong province, it was sent to Shanghai for testing on the 1.5-kilometer experimental magnetic track at Tongji University in Jiading district.

After three years of research and development in partnership with 30 companies and institutions, CRRC Qingdao Sifang said it had achieved breakthroughs in core technologies dealing with things like suspension, traction, communication and control.

The maglev train uses electromagnets to hold itself off the rails. Because there is no friction from contact with the rail, the train can run quietly and smoothly.

The train had already achieved static levitation in ideal conditions, and Ding said the test run helped verify the performance of its core parts in motion, gathering valuable data for the optimization of future models.

The high-speed maglev transportation system has been listed as a key project by the Ministry of Science and Technology, with research and development of a five-carriage prototype proceeding as planned.

"The train floats 10 millimeters above the rails, and it will be the fastest transportation within a distance of 1,500 km," Ding said in May last year when the prototype was first unveiled in Qingdao.

That is roughly the distance from Beijing to Shanghai, a journey that takes about 4.5 hours by plane, including preparation time, and about 5.5 hours by high-speed train. The maglev would cut that to about 3.5 hours.

Ding has taken part in the development of different Chinese high-speed trains, including ones that can travel at 250 km/h and the world's fastest bullet train, the Fuxing, or Revitalization, which has a top speed of 400 km/h.

Shanghai operates the world's first commercial maglev system, a 30-km stretch between Shanghai Pudong International Airport and the city center, which opened in 2003.

It has hit speeds of 430 km/h and takes passengers to the airport in just eight minutes.