A night view of Chongqing's Hongya Cave, which is one of the most popular cultural tourism sites in China. [Photo by Peng Yong/China Daily]

Chongqing has long been under-estimated as a tourist destination in China.

As a traditional industrial hub in southwest China as large as Austria, the mountain city used to be famous for its auto and manufacturing industries.

In the past, tourists from home and abroad came to Chongqing mainly for boarding the cruise ships to see the Three Gorges on the Yangtze River.

After becoming the fourth municipality of China after Beijing, Shanghai and Tianjin in 1997, the city has witnessed fast development and turned into a modern cosmopolitan area combined with advanced transportation systems, outstanding architecture and strong local features.

From time to time, Chongqing has made news for creating a series of firsts in the country, or even in the world.

Besides offering ordinary travel tips, this article takes you through the city's most extraordinary features.

Metro line 2 is one of the most beautiful rail routes in China, running on the mountains and by the Jialing River in Chongqing. [Photo by Peng Yong/China Daily]

Due to its mountainous landscape, transportation in the city can be challenging and creative.

Many visitors will be amazed by the complexity of the roads and traffic.

Huangjuewan Overpass in the city's Nan'an district has gained widespread attention after photos of the overpass were posted online.

The five-story overpass connects more than 20 ramps and eight different roads, which many call "probably the most complicated overpass" in the world.

Some people even call Chongqing an eight-dimensional city.

This massive project began in 2009 and took nearly eight years to complete.

The city also has the highest overpass in the country, at 72 meters. From windows on the 22nd floor of a nearby building, people can look across at the overpass and see the traffic.

Sitting in a car which is driving on the overpass is like flying in the air.

Chongqing boasts the deepest subway station in China: Hongtudi station on Line 10 has its train platform located at 94.46 meters (or 31 stories) underground. It is one of the deepest in the world.

This is a transit station between Line 6 and Line 10. Ninety-one escalators, considered China's largest escalator network, have been installed to move passengers between lines 6 and 10 and the surface.

Liziba Station on Line 2 of Chongqing Rail Transit became one of the most famous stations in the world after videos of the metro train passing through a 19-story residential building went viral on social media in recent years.

The station and the building were built simultaneously in early 2000 to save space. It uses specialized noise reduction equipment to isolate station noise from the surrounding residences.

Now it is a must-visit for tourists in the city. A viewing platform was specially built near the station for tourists to admire the trains.

Some pose for photos or take creative selfies with their mouths wide open. When a train passes, it looks like it is going through their mouths.

With two rivers winding around the city and after building more than 4,500 bridges in recent years, Chongqing is also referred to as the "city of bridges".

Back in the 1980s, the people of Chongqing designed a cable car in the air to get across the Yangtze and the Jialing rivers as a means of public transportation.

The Yangtze River Cableway stretches 1,166 meters with a one-way trip taking five to six minutes. It is now a tourist destination as more bridges are built on the river.

The iconic cable car has also appeared in many Chinese movies. 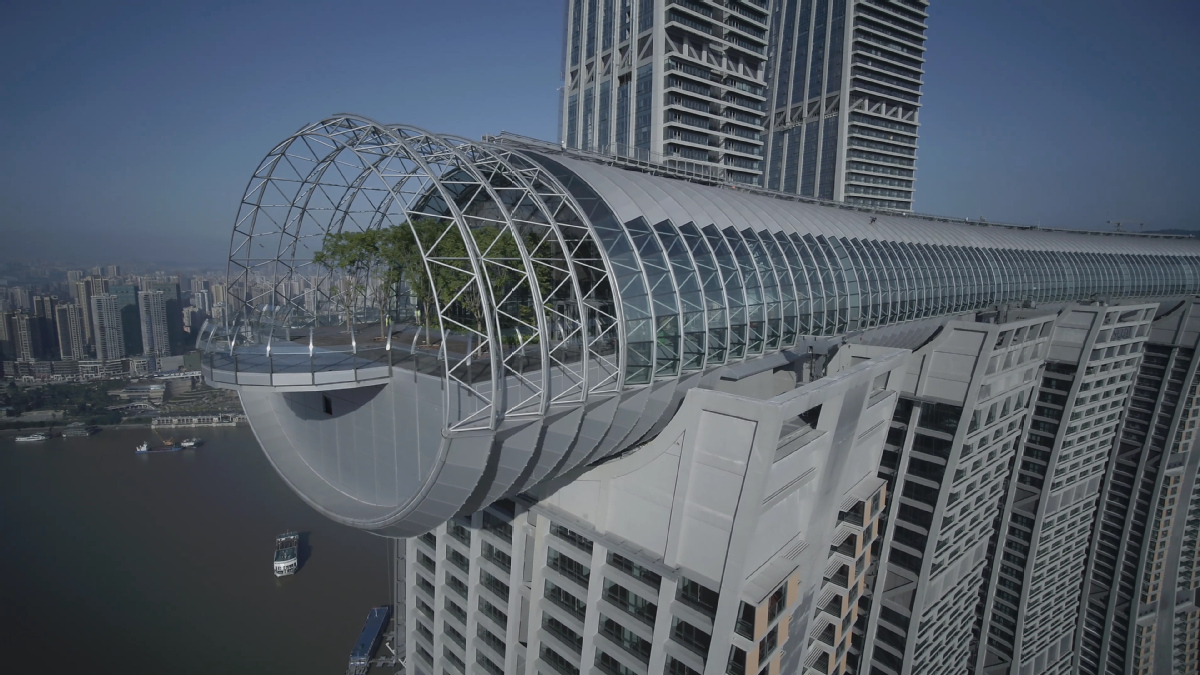 The Crystal, with its continuous steel structure, is the first horizontal skyscraper in China. [Photo provided to China Daily]

A giant landmark that looks like a spaceship recently stood up at Chaotianmen Port, where the Yangtze and Jialing rivers meet.

Inspired by traditional Chinese sailing vessels and dubbed an engineering marvel, Raffles City Chongqing is designed by world-renowned architect Moshe Safdie and boasts a sky bridge, called The Crystal, which is said to be one of the the world's highest such bridges.

Measuring 300 meters in length, the bridge houses the Exploration Deck, a viewing gallery accessible to the public, and The Private Club, a members-only clubhouse which operates the "highest infinity swimming pool in the world".

The Crystal was officially opened to the public on May 30. It is the first horizontal skyscraper in China, drawing a lot of attention at home and abroad for its difficulty of construction and engineering.

It represents a milestone in Chinese architectural history, with its use of advanced synchronous hydraulic lifting technology to hoist it into place and attach it to four 250-meter-tall towers.

The Crystal's continuous steel structure weighing 12,000 tons is equivalent to the total weight of France's Eiffel Tower, according to developer Capita-Land Group.

At the entrance to the Exploration Deck, there is a small history gallery providing interesting information of the river city and the construction of the architecture.

Most of the materials are exhibited to the public for the first time, including a book written by a foreign doctor teaching foreigners how to speak the local dialect.

Tourists can then take a high-speed elevator which will transport them to the sky bridge in 50 seconds.

Standing on the glass deck facing Chaotianmen Port, you can enjoy a beautiful view of the two rivers, the skyscrapers, the opera house and the Nanshan Mountain.

As the day gets dark, the night view of the city is unparalleled to anywhere else in China.

Walking trail is a sightseeing route that lets visitors experience the real life and history of Chongqing. [Photo by Xie Hao/China Daily]

In Chongqing, walking was the main way that most residents got around. Since ancient times, numerous walking trails or small roads that wind their way around the mountains have helped connect communities and lives.

Nowadays, some of them have been preserved and transformed into sightseeing routes to let visitors experience the landscape, real life and history of the city.

The history of Chongqing dates back 3,000 years. The city first took shape on the hilly Yuzhong Peninsula, which became the center of the local economy.

Mountain City No 3 Walking Trail at the peninsular is the best example. The 3.9-kilometer long trail starts at Zhongxing Road by the Shibanpo Yangtze River Bridge, stretches along the ancient city walls, and ends at Tongyuan Gate, one of the remaining two city gates from Song Dynasty (960-1279) and the only gate still in use.

Entry is free and visitors can get access to the trails from several entrances amid the old alleys. It is not easy to find the hidden entrances, but the warmhearted local people will happily provide directions.

Along the road overlooking the Yangtze River, you can visit several historical sites, pass by the houses of local residents and stop for a cup of tea at some quaint tea house or cafe.

In China, when people talk about spicy hotpot, they refer to Chongqing hotpot.

No visit to Chongqing is complete without sampling the local hotpot.

All hotpot cuisines are basically the same. While the soup simmers over a flame, meat and vegetables are placed in a pot to cook, and diners can select the items when they are ready to eat.

But Chongqing hotpot has the strongest flavor, with beef tallow, large quantities of chili and Sichuan pepper. Local people love eating hot and spicy food, probably due to the humid climate in the city.

Boasting both the best and largest number of hotpot restaurants in the country, Chongqing was named "China's hotpot city" by the China Cuisine Association in 2007.

According to the Chongqing Hotpot Association, there are more than 50,000 such restaurants in the city, employing at least 3.5 million people.

As competition is fierce, there are many outstanding outlets and local people can never agree on which is the best. Everyone has their preferences.

For tourists, eating hotpot near the rivers or on the mountains can be a special experience.

The hospitable locals like to invite guests to Nanshan Mountain, south of the Yangtze River, to eat hotpot in open air. There is a "hotpot village" on the mountain which can only be reached by car.

Dozens of hotpot restaurants are located along the kilometer-long road. Some boast views of Lotus Lake and others have hundreds of tables all over the mountain. At night, when the restaurants light up their red lanterns, the view is unforgettable.

Since Dec 1, 2019, Chongqing has offered foreign tourists a 144-hour (or six-day) window to explore the city without a visa, following the introduction of a new policy for transit passengers from 53 countries.