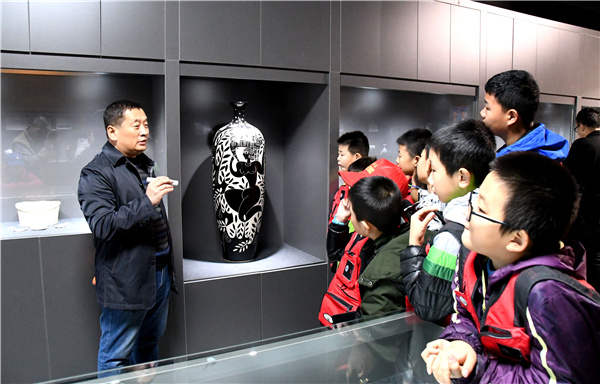 Zhang gives visiting students a tour of his museum.[Photo provided to China Daily]

Clay is transformed into fine porcelain as a once-lost ancient skill enjoys a revival.

He makes things. Molds them. Shapes them, exposes them to furnaces and glazes them. They are made out of what at first sight looks like muck. Zhang Wenliang's hands turn mud into art.

The room where he works is quiet enough to hear the light buzz of the spinning potter's wheel, along with the splashing sound of water and clay being mixed together.

The bottom of the vessel emerges after Zhang sticks a bamboo knife in the moving clay, and then, as if by magic, so do the vessel's bulging body and narrow bottleneck in the wake of the genteel and artistic path of his fingers.

"This is the most classic model of our Pingding carved porcelain," Zhang says.

Pingding county, located in Yangquan city, sits in the center of North China's Shanxi province and has a long porcelain-making history that dates back to the Tang Dynasty (618-907).

The most traditional carved porcelain is black glazed. 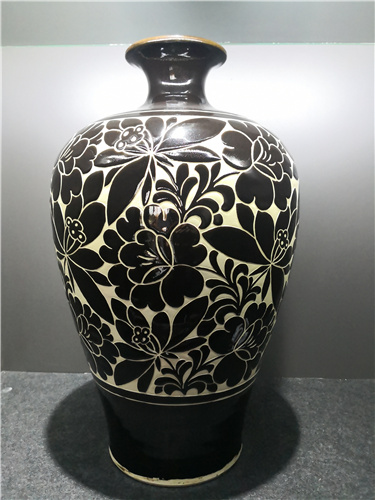 A Pingding black-glazed carved porcelain vase, made by Zhang Wenliang, which is on display with more than 1,000 other pieces of pottery at his museum which opened last year in Pingding county, Yangquan of Shanxi province.[Photo provided to China Daily]

Unlike other well-known porcelain, whose patterns are often drawn in advance, the Pingding porcelain is directly carved by a knife before the wet clay dries. This requires that the carving is done quickly in one sitting.

Of all the steps involved in making the porcelain, Zhang says the most crucial one is the firing.

"You never know exactly what pattern will emerge," he says.

More than two decades of porcelain making, however, has given Zhang a good sense of just how it will turn out. 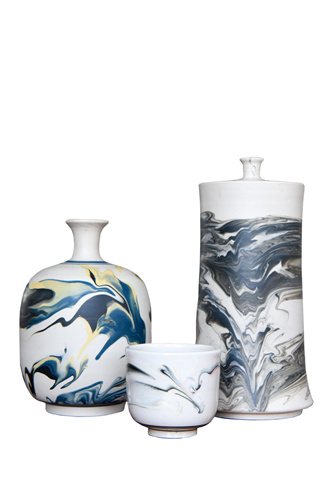 The art of Pingding carved porcelain had been lost due to war and turmoil toward the end of the Song Dynasty (960-1279). Zhang and his father began to rediscover the art based on the diggings and findings by porcelain experts in the 1960s.

"It was frustrating at first, when we saw all that we sent to the furnace come out of it ruined," Zhang says.

Zhang and his father were not going to be discouraged by their initial failure. Through trial and error, they managed to resuscitate the art and once again bring it back to the public eye. They have also been able to integrate the traditional art with modern technology and culture.

The Yunshui porcelain, literally meaning "cloud and water", Zhang developed a few years ago, is characteristic of Chinese landscape painting elements and presents more colors than the usual black glaze.

Zhang has also broadened the range of his porcelain objects, from small plates and bottles to large pots and flasks.

In 2018, Zhang was named a national intangible culture heritage inheritor for his ability to make black-glazed carved porcelain.

Born in a small village in Pingding, Zhang has been exposed to pottery since childhood. His father and uncles were craftsmen working at a local porcelain plant.

"I often went with my father to work and played with the mud," Zhang recalls.

He then developed a habit of watching his father and uncles making porcelain.

Zhang began training with his father and uncles at 17 years old.

He picked up skills for black glaze, molding and kiln operation.

"At that time, I was driven to learn more by curiosity," Zhang says.

Not until the 1990s did Zhang start to take the initiative and explore the world of porcelain manufacture.

He met several interns led by professors from the Central Academy of Fine Art, the predecessor of today's Academy of Arts and Design, Tsinghua University.

"They trekked a long way from Beijing and worked very hard," Zhang recounts, adding that it dawned on him that he had no reason not to work harder, when all the resources he needed were within arm's reach.

After the Beijing students were gone, Zhang immersed himself in acquiring all the knowledge he could on porcelain.

He studied techniques and practiced clay modeling on the revolving stone disc.

Often, he came out of the plant, his face and clothes covered in mud, but "it is one of my happiest memories", Zhang recalls.

After a year, Zhang had the skills, especially the most difficult, molding, and became a major craftsman at the plant.

But he still felt his craftsmanship was lacking something and he needed more input from his father. He also studied with Zhou Shulan, a porcelain art professor from Tsinghua University's arts and design academy.

Zhang first met Zhou when she visited the factory. He corresponded with her and asked questions and often came to Beijing to learn from her at the academy.

He began to take an interest in tracing the history and culture of the art.

"It feels only natural that I should know everything about something that I have been doing for so long," Zhang says.

He began to collect porcelain relics from across the country and studied their origins.

Years of practice has given him a sharp eye for antiques.

"Even if a historical item is broken or just a fragment of a whole piece, I'll take it in, once I know it's authentic," Zhang says.

In 2019, Zhang opened the carved porcelain museum in Pingding.

The museum covers an area of 1,700 square meters and presents his private collection to the public－more than 1,000 porcelain items from the Shang Dynasty (c. 16th century-11th century BC) to modern times.

The Pingding carved porcelain museum is a new cultural landmark in Pingding, says Zhang Xing, a porcelain art design professor from the Academy of Arts and Design, Tsinghua University.

It plays a positive role in protecting and inheriting the porcelain culture, Zhang Xing adds.

The idea of building the museum is to publicize and develop porcelain culture, Zhang Wenliang says. "I want to make those antiques come alive," he says.

In his museum, he is happy to act as a guide and introduce to visitors the history behind each item on display, and he has also set up on-site workshops for visitors, offering them the chance to make their own pottery.

Earlier this year, he took in two more apprentices. He now has nine.

"My only requirement for them is moral integrity and interest in porcelain and pottery."

He considers his role as an intangible culture inheritor both an honor and a responsibility.

"I have to not only inherit craftsmanship from the previous generation, but also pass it on," he says.