Parents film their children entering the test center at Guangzhou No 16 Middle School on the first day of the national college entrance exam, orgaokao, in Guangzhou, Guangdong province, on Tuesday.XIA SHIYAN/FOR CHINA DAILY

With parents, teachers and friends lining up outside test centers to cheer them on, a record 10.71 million students around China began taking the all-important national college entrance exam, orgaokao, amid the COVID-19 pandemic on Tuesday, after it had been delayed by a month due to the outbreak.

Students in most parts of the country will take the exam on Tuesday and Wednesday, while in some places that have undertaken gaokao reforms, such as Beijing, the exam will be held until Friday.

Measures are in place to avoid the spread of the novel coronavirus during thegaokao, which will be the largest organized gathering of people since the start of the outbreak.

Students are required to have their temperatures checked before they can enter the test centers, and only those with temperatures below 37.3 C are allowed in.

Quarantine test rooms are available for students if they show symptoms on exam day, with each room hosting no more than four students, and each test center has at least three quarantine rooms.

Students and the 945,000 monitors are required to wear masks, though students in low-risk areas of infection can take them off during the test.

In Beijing, where a new wave of cases have been reported since last month, the number of students allowed in each test room has been reduced from 30 to 20 this year so that students can be kept at least 2 meters apart.

The test centers are using air conditioners to keep the rooms cool while also keeping windows open to make sure the rooms are ventilated.

Wearing masks and standing under trees or umbrellas, they seemed more nervous than their children as they chatted with each other to pass the time and exchanged tips about how to make sure their children can eat and rest properly during the four-day exam. 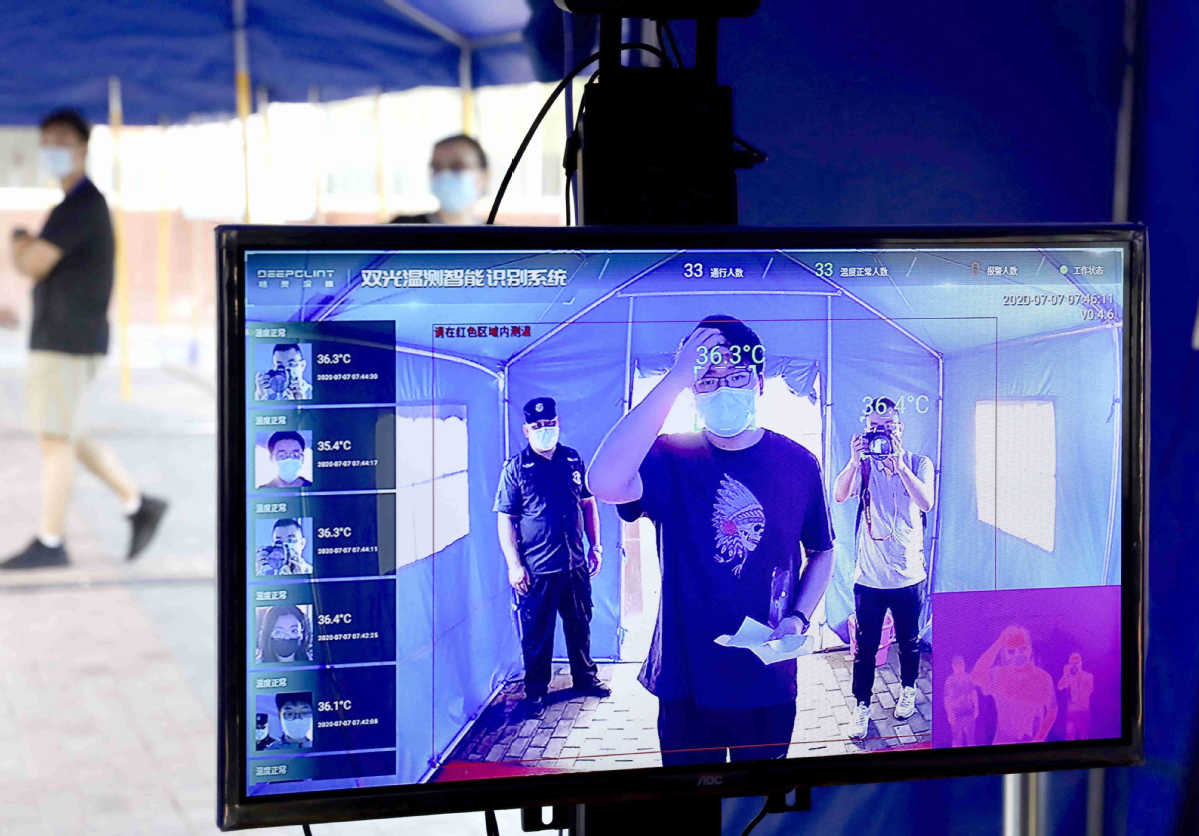 A test taker has his temperature measured before entering a testing site in Beijing on Tuesday. Photo by Zhu Xingxin/China Daily

One of the parents, Wang Jiao, said she wanted her daughter to see her as soon as she walked out of the test room.

"I am very proud of her for all the effort she put into preparing for the exam, especially during the epidemic," she said. "No matter how the results go, thegaokaois a valuable experience."

"The final year of high school is filled with challenges, and it is more stressful this year as the exam has been delayed due to the COVID-19 epidemic," said a teacher surnamed Shi from the Shanghai Experimental School.

"We've been focused on psychological counseling for students, and so far, they are in a stable mood," Shi told local media ThePaper.cn.

Yan Jie, a student from Beijing Zhongguancun Foreign Language School who took the gaokao on Tuesday at Zhongguancun High School, the largest gaokao testing center in Beijing this year, said the college entrance tests are much easier than what she expected as the COVID-19 epidemic had lowered the difficulty of the exams.

"There were some blind spots during the Chinese test, but mostly I answered those questions smoothly," the 19-year-old said.

Yan's classmate, Wu Tong, 18, said the test-takers at the high school had plenty of room.

"Around 20 students sat in a classroom, which previously held about 30 students tightly," she said, adding that taking the nucleic acid test is necessary to enter the test center for the exam.

Some parents have made extra efforts to bestow good fortune upon their children.

Jia Ling, mother of a high school student in Beijing, told China Daily that she wore a red, tailor-made traditional qipao, or cheongsam, to the test center for good luck.

Red is traditionally associated with good fortune in China, and qipao shares a character that is used in the Chinese phrase "success at first attempt", or qi kai de sheng.

She also drove her son to the test center in a BMW, as the Chinese translation of the brand's name Baoma shares a character used in the Chinese phrase "success on arrival", or ma dao cheng gong.

She wore Nike shoes for the resemblance between the company's "swoosh" logo and the universal symbol of success, the tick.

"My son had a good laugh about such superstitions, but I am serious," she said. "That's the least I can do."

Cao Chen in Shanghai and Xin Wen in Beijing contributed to this story.