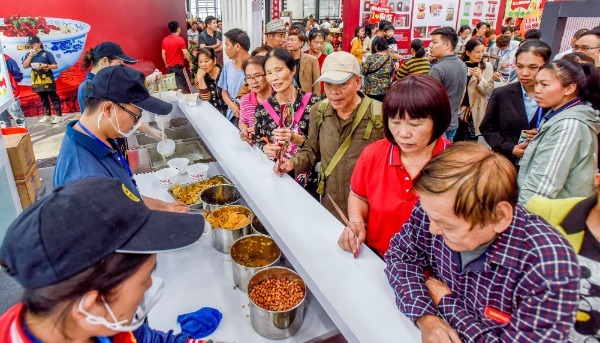 Customers line up for a bowl of luosifen at the World Rice Noodles Expo in Nanning, Guangxi Zhuang autonomous region, in November.[Photo/Xinhua]

Exports of luosifen, an iconic dish known for its pungent smell in the southern Chinese city of Liuzhou, registered remarkable growth in the first half of this year, data from Liuzhou customs showed on Thursday.

A total of around 7.5 million yuan ($1.1 million) worth ofluosifenwere exported from Liuzhou, South China's Guangxi Zhuang autonomous region, from January to June, eight times the total export value of 2019.

In addition to the traditional export markets such as the United States, Australia and some European countries, shipments of the ready-to-serve food were also delivered to new markets, including Singapore and New Zealand.

Combining the traditional cuisine of the Han people with that of the Miao and Dong ethnic groups, luosifen is a delicacy of rice noodles boiled with pickled bamboo shoots, dried turnip, fresh vegetables and peanuts in spiced river snail soup. It emanates a "stinky" smell after boiled.

Listed as an intangible cultural heritage of Guangxi in 2008, the dish was featured in one of the most acclaimed food documentaries,A Bite of China, in 2012.

Its unique flavor has conquered the taste buds of food lovers far and wide and was one of the best-selling ready-to-serve foods during the COVID-19 outbreak in China.

Local producers have also tweaked the recipes to cater to the taste of overseas foodies. "Luosifenis traditionally made from river snail soup, but we have developed a new product that uses beef bone broth while maintaining the original flavor. It was very well received," says Liu Qingshi, chairman of Liuzhou Luozhuangyuan Food Co, a major luosifen producer.