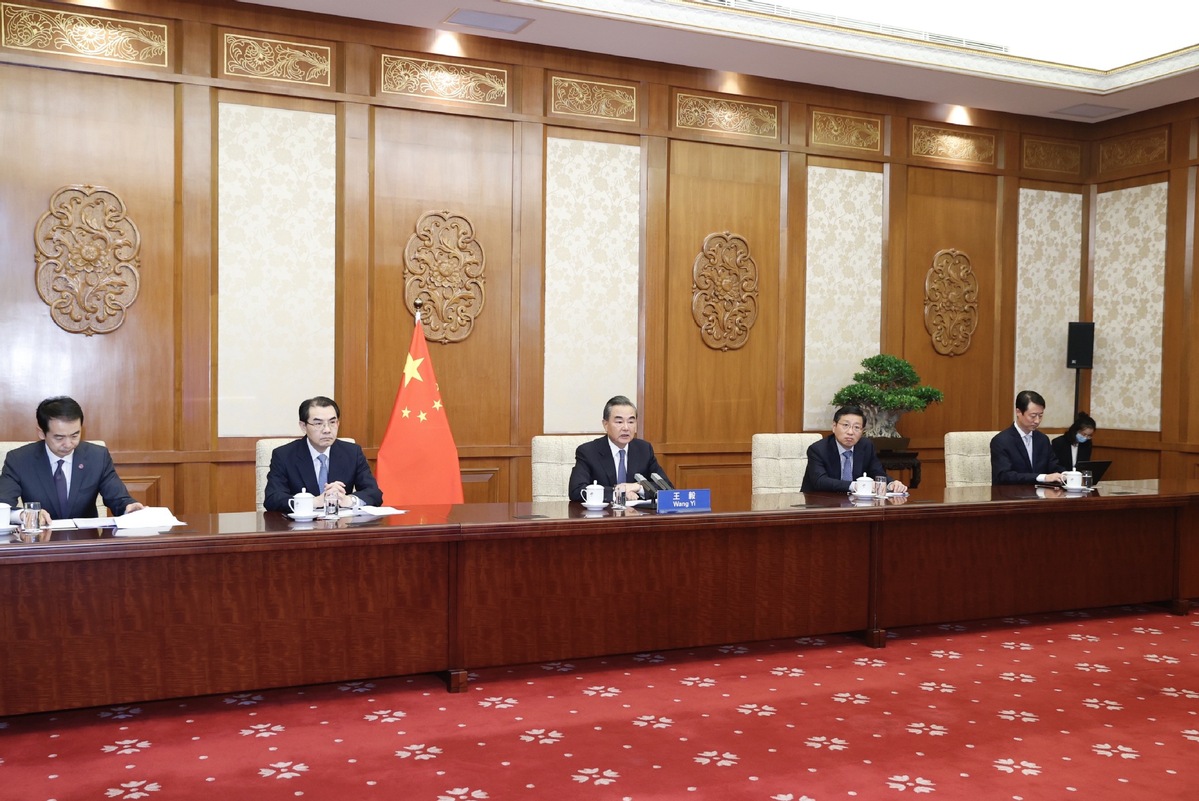 Beijing has called on countries to remain vigilant to Washington's tendency toward militarization in the South China Sea and jointly safeguard regional peace and stability.

State Councilor and Foreign Minister Wang Yi made the remark in a videoconference on Tuesday with Philippine Foreign Secretary Teodoro Locsin.

The United States continues to disturb tranquillity in the South China Sea by sending advanced warships and aircraft to flex its muscles there, Wang said.

On Monday, US Secretary of State Mike Pompeo said in a statement that "Beijing's claims to offshore resources across most of the South China Sea are completely unlawful".

The statement violated Washington's commitment not to take sides in territorial disputes in the South China Sea, deliberately sowed discord between China and members of the Association of Southeast Asian Nations and attempted to create conflicts between regional nations and undermine regional stability, Wang said.

Such a practice of backtracking will only harm the credibility of the US, he said.

China will continue to work with the Philippines and other countries in the region to deal with maritime issues through dialogue and consultation and conclude a code of conduct in the South China Sea at an early date, Wang said.

"Dealing with the South China Sea issue requires us to look forward together instead of going back to the past," Wang told his Philippine counterpart.

Locsin said that bilateral maritime disputes should not and will not affect the friendship between the Philippines and China.

The Philippines would like to resolve disputes relating to the South China Sea through friendly bilateral negotiations and promote maritime cooperation with China, he said.

In response to Pompeo's remarks, Foreign Ministry spokesman Zhao Lijian said on Tuesday that Beijing has never striven to build a "maritime empire" in the South China Sea, and he urged Washington to stop its attempts to disrupt and sabotage regional peace and stability.

Pompeo said in his statement that Beijing has offered no coherent legal basis for its nine-dash line claim in the South China Sea "since formally announcing it in 2009", and the Arbitral Tribunal's decision on the South China Sea in 2016 is final and legally binding on China and the Philippines.

The Chinese government published the Location Map of the South China Sea Islands, on which the interrupted lines are marked, in 1948, Zhao said at a daily news briefing.

The lines have not been questioned by any country for a very long time, Zhao said, adding that China's territorial sovereignty and maritime rights and interests in the South China Sea have sufficient historical and legal basis and are consistent with relevant international law and international practice.

He refuted Pompeo's remarks about the arbitration case, saying that China will not accept abuse of international maritime law by the US by hyping the South China Sea arbitration case to serve its political purposes.

China will continue to safeguard its sovereignty and security in accordance with the law and maintain friendly cooperation with regional countries, he said.

Also on Tuesday, Zhao announced that China will impose sanctions on contractor Lockheed Martin Corporation for its involvement in the latest US arms sale to Taiwan.

The company is the main contractor for a $620 million upgrade package for Taiwan's Patriot surface-to-air missiles, which was approved by the US last week.

The sanctions are necessary measures to safeguard national interests, Zhao said, calling on the US to end its military ties with Taiwan and stop selling weapons to the island in order to avoid further harming China-US ties and cross-Straits stability.

Zhu Fenglian, a spokeswoman for the State Council Taiwan Affairs Office, said that the Democratic Progressive Party authority's efforts to seek "independence" are due to fail, and these moves will only undermine peace and stability across the Taiwan Straits and bring disaster to people on the island.