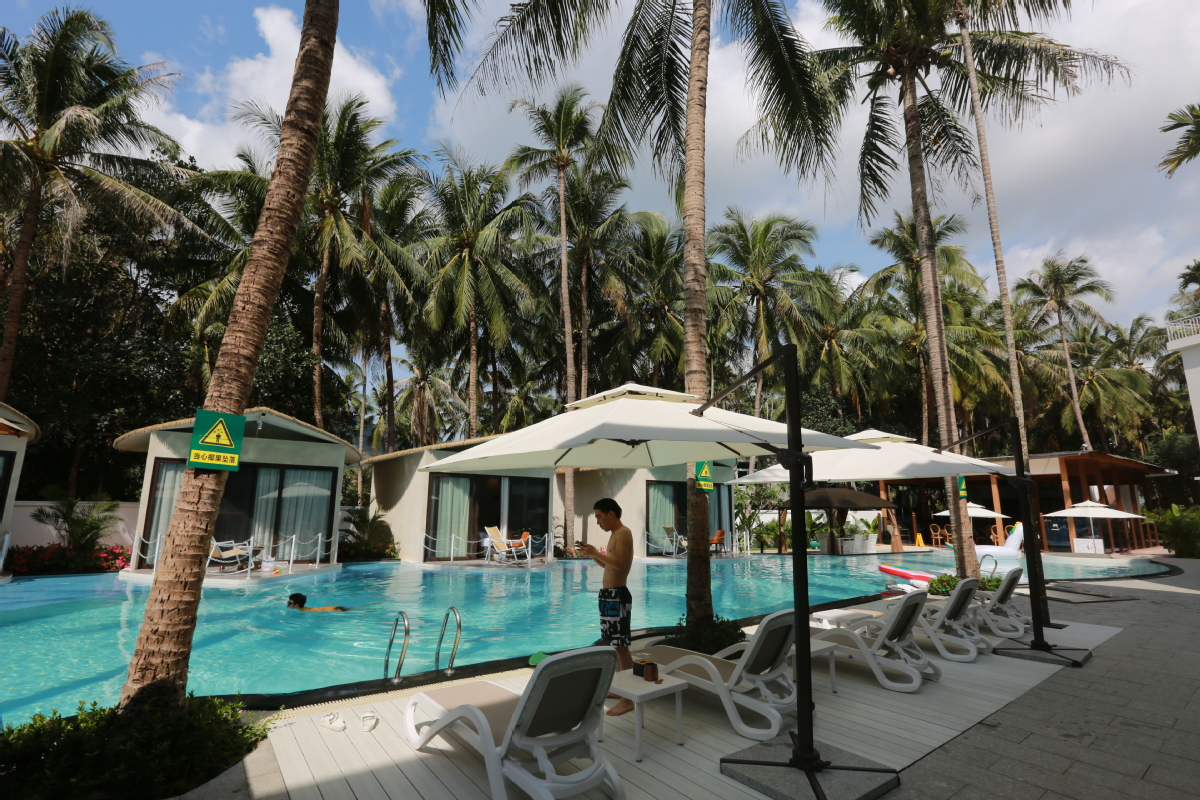 Holidaymakers enjoy leisure time by a pool at a homestay in Yalong Bay, Hainan province, in May. [Photo by SUN QING/FOR CHINA DAILY]    Unlike many tourism and related businesses that have suffered because of the COVID-19 outbreak this year, Tan Zhongxian's homestay in Bohou village, Sanya, Hainan province, has flourished.

The ongoing pandemic overseas has forced a large number of Chinese travelers, especially those who regularly take island tours, to abandon plans to travel abroad.

Instead, many have chosen Hainan, China's only tropical island province, as their holiday destination, especially as the outbreak has basically been brought under control nationwide, according to Tan, who is secretary general of the homestay association in Bohou.

Yalong Bay in Sanya, Hainan's most southerly city, does not lack luxury hotels, but given the expense and similar facilities, "our village homestays, with their home-from-home atmosphere, delicious local food and beautiful quiet countryside, are more affordable for the average tourist," the 39-year-old said.

According to a recent report in Sanya Daily, the average occupancy rate of the 1,000 rooms in the village's 34 homestays was more than 85 percent during the five-day Labor Day holiday in May. For example, 34 of the 38 rooms in Tan's homestay were occupied during the period, with prices ranging from 150 yuan to 260 yuan ($21 to $37) per night.

Just a short drive from the sea, all the homestays in the village offer shuttle services and special activities, such as picking tropical fruit and visits to a rose valley.

Visitors not only enjoy the usual blue skies and warm sunshine, but also learn about local habits.

"To choose us is to choose a life closer to that of real Hainan residents," Tan said, adding that the industry has helped villagers, including himself, to become rich.

The blueprint called for governments at county and township levels to make better use of land resources to develop the industry and rejuvenate local employment, plus the tourism, agricultural and cultural sectors.

Recognizing the homestay sector as an important way of promoting rural revitalization, the plan requires government agencies to identify local characteristics and advantages and take measures to suit the prevailing conditions and expand training in homestay services. 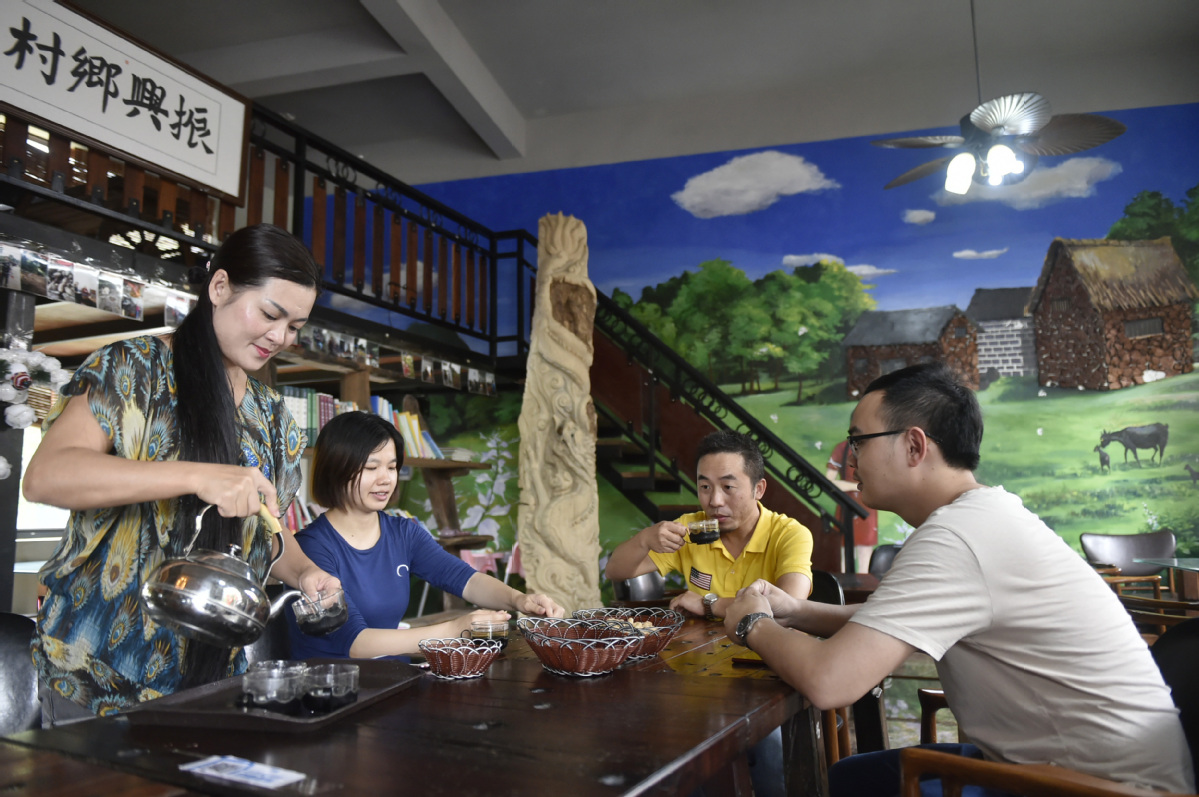 Local tea is served to tourists at a homestay in Hainan last year. LU PENG/XINHUA

As a major holiday resort, Sanya attracts a large number of tourists every year. "However, few travelers come to take a look at our village, even though we have enchanting rural scenery," Tan said.

"Some visitors just buy a few coconuts at the village entrance on their way to the seaside. We knew we should develop tourism, but we didn't know how to promote it or attract tourists to stay in our village."

He added that before 2016 most of the residents, including his own family, made a living by pig farming or growing crops, while many of the younger generation worked outside the village.

At the time, Tan was working for an electromechanical company based in Guangzhou, Guangdong province. During a business trip to Zhejiang province, he found that many locals were benefiting from the homestay industry, which impressed him and opened his eyes to the burgeoning sector.

"I thought homestays could present an opportunity to revitalize our village, so I wanted to try," he said.

He said goodbye to his decade-long migrant life and returned to Bohou, using his savings to renovate his shabby house.

He opened a homestay called Hai Na Jie, meaning "Drop by whenever you are free" in the language of the Li ethnic group, which has a strong presence in the village and Hainan in general.

To Tan's delight, the homestay brought in a substantial income. Many villagers contacted him and indicated their willingness to join the business, while a few companies noticed the developments in the village and decided to invest in the homestay project.

Some villagers used their savings to renovate their houses and open their own homestays, while some impoverished residents rented their houses to investors under agreements overseen by the village committee.

People quickly decided that running homestays was preferable to cultivating crops that were reliant on the weather and climate.

"The earnings brought by the homestay industry are more stable. In addition to rental incomes, homestays also offer jobs for villagers, such as cleaning rooms," Tan said, adding that last year per capita income in the village reached 24,000 yuan, three times more than in 2016.

Pu Chaoshan's family was one of the households lifted out of poverty after joining the homestay industry. With the aid of the village committee, Pu obtained a bank loan of 400,000 yuan and opened a homestay in 2018.

He used last year's earnings to buy a car, which serves as a shuttle vehicle for tourists.

According to Tan, 10 more homestays are under construction in the village. He estimated the number will rise to 50 by the end of the year, adding that the residents are planning a night fair and a range of activities based on local customs. 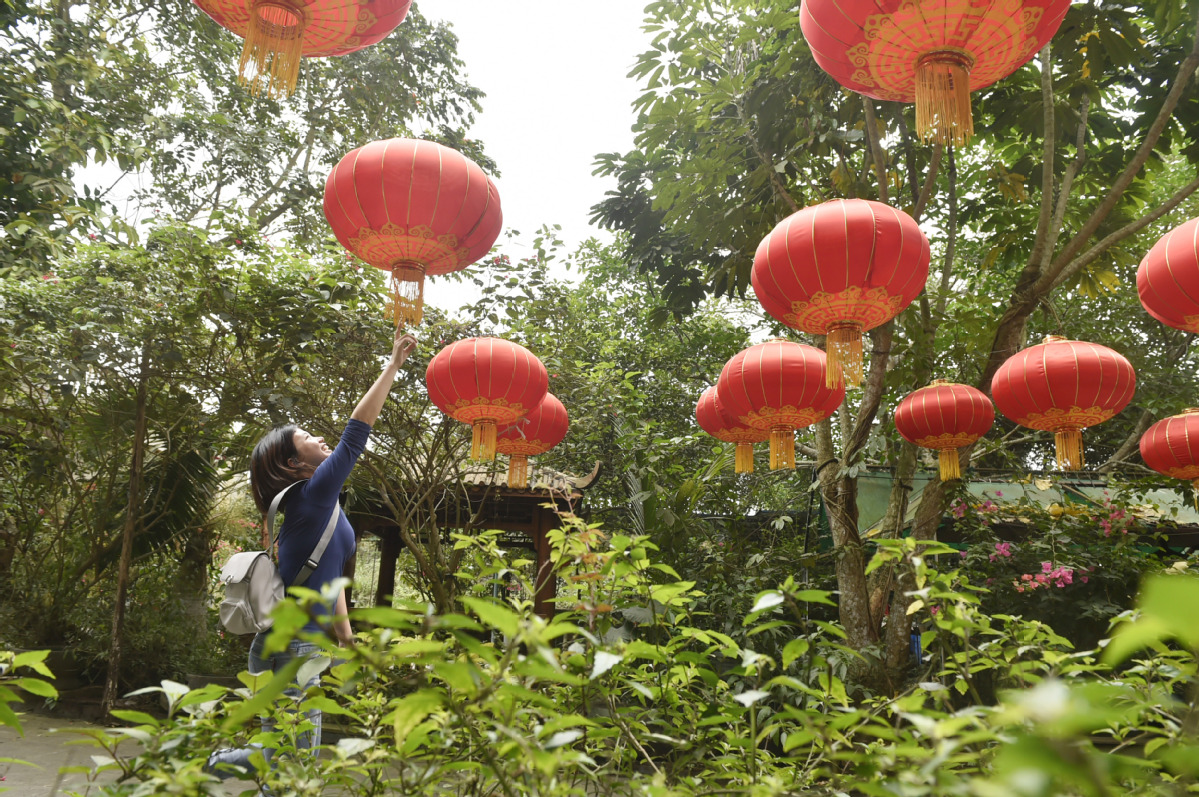 A traveler examines lanterns hanging in the garden of a homestay. LU PENG/XINHUA

Huang Liangji, deputy head of Longlou township in Hainan's Wenchang city－about 300 kilometers from Sanya－has also recognized the prospects of the homestay industry and signaled his confidence in its development.

In 2016, the China Wenchang Satellite Launch Center, the country's first such facility located by the coast, was opened in Wenchang.

Its growing fame has attracted hordes of tourists in the past two years, driving rapid growth and big changes.

In response, Huang said the homestay and catering industries will focus on visitors who are interested in the aerospace sector.

Located about 19 degrees north of the equator, the center is the launch site for geosynchronous and heavy satellites, large space station components, and lunar and interplanetary missions.

In 2017, a plan was drafted to develop the center into a space industry base called Hainan Wenchang International Aerospace City. The plan has resulted in unprecedented opportunities for Wenchang, especially in the finance and tourism industries.

"A large number of tourists visit our township, which not only boosts villagers' incomes but also provides job opportunities. In the past few years, average annual incomes have grown at 7 percent－last year, Longlou residents saw annual per capita income of more than 16,000 yuan," Huang said.

"All the benefits are the result of the aerospace industry, the township's biggest tourist attraction, so we have decided to highlight it in our future development. I believe the two new industries (homestays and catering) related to aerospace will further contribute to our rejuvenation. However, we have just put the idea forward and specific measures are still being studied."

The plan, officially launched last year by the provincial housing and urban-rural development department, noted that nearly 70 percent of homestay consumers are ages 18 to 35, and they mainly choose village homestays because of the natural scenery, the home-from-home atmosphere and special room designs. 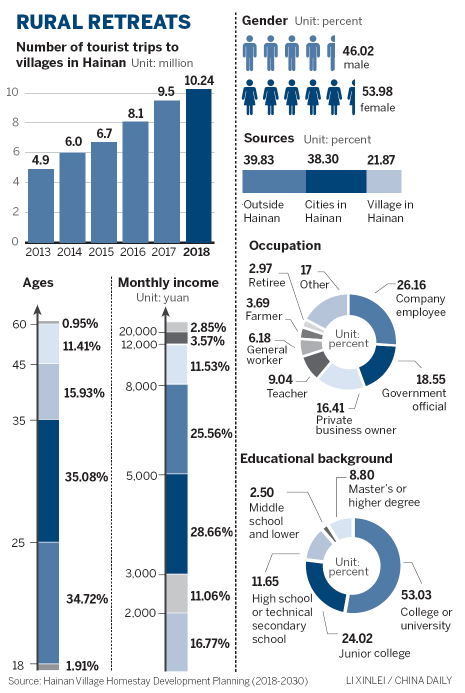 On June 1, a master plan was released for the Hainan Free Trade Port, which aims to build the whole island into a globally influential high-level free trade port by the middle of the century.

Tan and Huang said they had read the details of the plan and will keep an eye out for specific measures, as they believe the move will promote the island's village homestay sector and further drive rural revitalization.

Although Hainan has seen rapid growth in village tourism, the province still faces challenges in learning how to make full use of idle land in rural areas if it wants to achieve further improvement of the village homestay industry, as laid down by the plan.

"Government departments will need to undertake more research on exchanging information with the outside world about the requirements of our villages and how to attract more investors to develop them," said Sun Linghui, an official in Sanya's Jiyang district.

The plan noted that a rising number of tourists are seniors who visit the tropical island to enjoy the warm environment during winter, so efforts should be intensified to develop more long-term village homestays and related nursing projects.