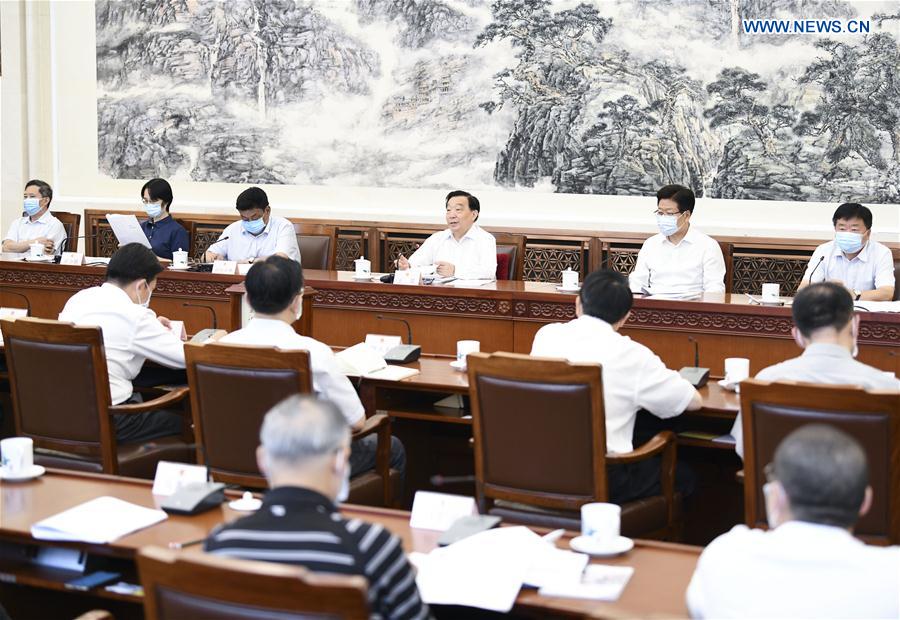 Wang Chen, a member of the Political Bureau of the Communist Party of China Central Committee and vice chairman of the National People's Congress (NPC) Standing Committee, speaks at a meeting of the Charity Law enforcement inspection group in Beijing, capital of China, July 17, 2020. (Xinhua/Yan Yan)

BEIJING, July 18 (Xinhua) -- A senior legislator has stressed the full and effective implementation of the Charity Law to promote the development of charity and improve the social security system.

Wang Chen, a member of the Political Bureau of the Communist Party of China Central Committee and vice chairman of the National People's Congress (NPC) Standing Committee, made the remarks at a meeting of a law enforcement inspection group on Friday.

Noting that the Charity Law is a legal pillar that underpins social aid and the multi-tiered social security system, Wang said the NPC Standing Committee will consider revising the law after the law enforcement inspection.

He stressed strict inspections of charity organizations in terms of donations, assets, services, information transparency, and management in accordance with the Charity Law.

Wang also called for more efforts in popularizing and implementing the law.

The NPC Standing Committee will send groups to six provincial-level regions to inspect the enforcement of the law, and the inspections will be carried out in July and August, covering Shanxi, Liaoning, and Jiangsu, among others.

Legislative bodies in seven other provincial-level regions have been tasked to run parallel inspections on the law.

The inspections will focus on fields including the establishment and development of charity organizations, charity fund-raising and donations, charity services, and disclosure of charity information, according to the meeting.