The 5th congress of ROCR of provincial units held in Changsha 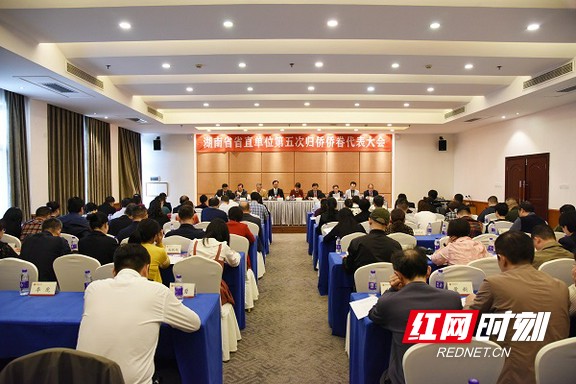 Huang Fang expressed warm congratulations on the success of the conference and briefly introduced the organizational structure and functions of the Federation of Overseas Chinese. Huang Fang pointed out that FOC of Hunan provincial units (hereinafter referred to as "the federation") as a new leadership team, to enhance the political lead of overseas Chinese organizations, adhere to the thought of socialism with Chinese characteristics in Xi Jinping new era as a guide, should further transfer the enthusiasm of the returned overseas Chinese and relatives in the economic and social development of Hunan to support. It ws necessary to enhance the advancement of the federation, fully integrate the post advantages of the overseas Chinese community, and actively guide the returned overseas Chinese and their relatives and overseas Chinese to combine their own knowledge, technology and capital advantages with the economic and social development of Hunan, so as to contribute the strength of the overseas Chinese community. The federation should uphold the mass character of FOCs, safeguard the legitimate rights and interests of the masses of overseas Chinese in accordance with the law, and at the same time carry out various forms of recreational, sports and entertainment activities to provide accurate and efficient services to overseas Chinese.

The meeting adopted a resolution on the work Report of the fourth Committee of the federation. At the meeting, An Zhong was elected as the chairman, Si Xuequn, Xiang Guorong, Liu Yu, Su Guiliang, Zhang Ming, Chen Xiaofeng, Zhou Rong, He Zhixiong, Tao Lihui and Peng Di were elected as the vice-chairmen, and He Jianping was appointed as the Secretary-General. Lv Zhaolong, Su Huaxiang, Zhang Qinwei, Luo Wei and Xie Desheng were appointed as the advisers of the fifth Committee of THE Provincial Federation of Direct Overseas Chinese.