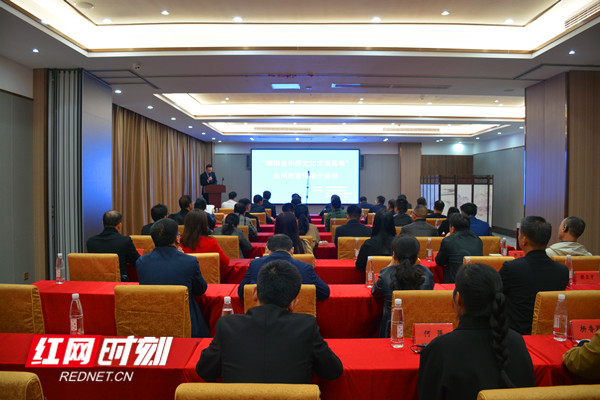 Overseas Chinese cultural exchange base(OCCEB) in Hunan is to carry forward Chinese excellent culture, hunan culture, promote cultural exchanges between China and foreign countries, hunan important window of foreign exchange, is the provincial federation of system integration of social resources, promote the complementary advantages, resultant force to carry out the important platform for cultural exchange activities at home and abroad, is the provincial federation of organizations at all levels actively expand to deepen the important carrier of "love China" theme activities.

Li Zuyuan said that it was not easy for the six units in Yongzhou to stand out among the many applicants and become the provincial cultural exchange base for overseas Chinese. Listing was only the beginning. Playing a role was the key. It ought to cherish the honor in bases' construction. Yongzhou should build a platform for overseas Chinese youth to find their roots organized by FOC, and a platform for overseas Chinese to attract investment, talents and wisdom, and make friends. Yongzhou and its counties should put the enthusiasm of into the base construction, strengthen the guidance and supervision of construction management, and perfect the function of cultural exchange base, promote fellowship, overseas merchants to attract, to serve Yongzhou economic and social development.

At the meeting, Li Zuyuan, member of the Party group and vice chairman of Hunan Federation of Overseas Chinese, also awarded the first batch of "Hunan Overseas Chinese Cultural Exchange Base" in Yongzhou city.