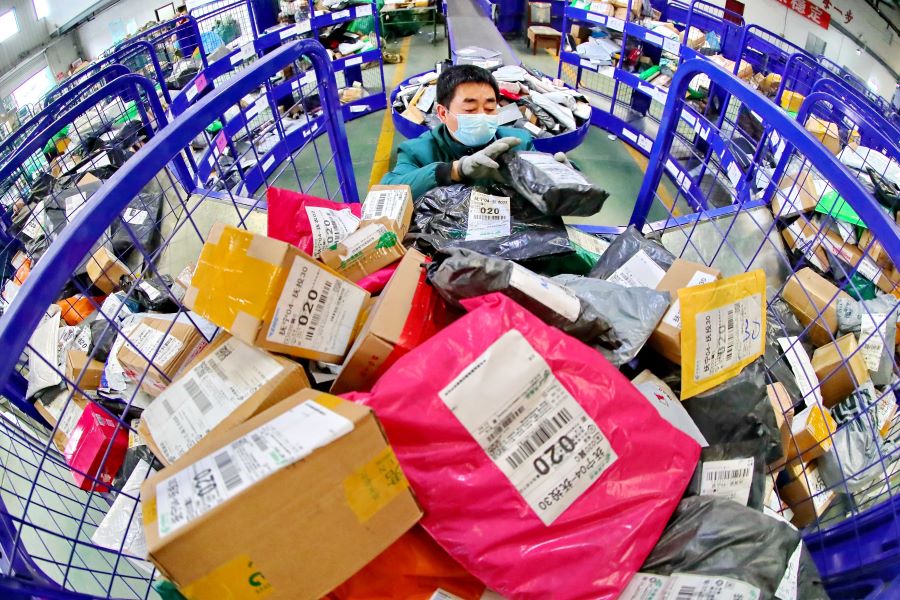 An express worker processes packages at a delivery station in Qinhuangdao, Hebei province, on Feb 24. [Photo by Cao Jianxiong / for China Daily]

The goals were unveiled at the annual conference of the State Post Bureau in Beijing on Monday.

The industry is expected to see continued growth in express deliveries this year, with 95.5 billion parcels forecast to be delivered, a year-on-year increase of 15 percent. China handled 83 billion packages last year, a year-on-year rise of 30.8 percent, the bureau said.

Goals have also been set to encourage greener packaging of deliveries. Some 5 million recycled boxes are expected to be used and 20,000 stations will be built by China Post to collect used packaging. Eighty percent of packages ordered from online shops will not be wrapped a second time for transportation.

The bureau will also encourage companies to use new energy vehicles to deliver packages.

Logistics companies and high-tech businesses will also be encouraged to cooperate with research institutes and universities to set up research centers to promote high technology applications in the delivery service industry, including the application of big data and cloud computing. Pilot "smart "programs will be carried out in places such as the Hainan Free Trade Port.

China's logistics industry has developed rapidly in the past five years, said bureau head Ma Junsheng, adding that opportunities and challenges will both be seen in the next five years, necessitating higher standards to facilitate the industry's high-quality development.

On Nov 11, China's largest e-commerce shopping spree, 675 million packages were handled-the most ever for one day. Along with the millions of packages, a great amount of wrapping was used, resulting in a stepped-up drive for greener package wrapping.

In June, the State Post Bureau released a guideline on greener packaging. It called for the use of recycled and lighter materials and regulating the sizes and materials of boxes and tape. It also urged enterprises to set up wrapping recycling bins at delivery stations.

To establish a standard for best practice, the bureau and the State Administration for Market Regulation released a list of green wrapping products. The products on the list, which bear a special logo, range from wrapping bags and boxes to tape and insulation. Delivery enterprises are being encouraged to use products on the list.

The bureau has promoted the use of narrower tape and recycled wrapping, set up bins to collect used wrapping such as boxes and bags, and has called for less repetitive wrapping for items being transported.